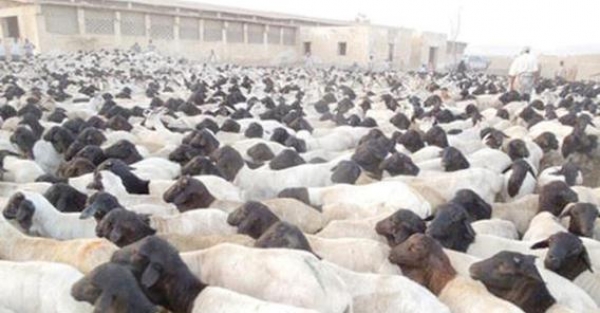 Somalia is the world leader in export of sheep and goats, the tonnes of bones discarded in the nation are becoming material for a burgeoning soap industry

The Food and Agricultural Organisation (FAO) have released a report stating that in 2014 Somalia has exported over 5 million livestock to the Gulf of Arabia markets. “thanks to heavy investments in animal disease prevention backed by the European Union and the United Kingdom”.In the last 20 years, it is been the highest number of live animals exported from Somalia.
Data exports, collected by the FAO-managed Food Security and Nutrition Analysis Unit (FSNAU), shows that Somalia has exported 4.6 million sheep and goats, 77,000 camels and 340,000 cattle in 2014,  which is worth $360 million and has contributed 40% to the country’s GDP.

Infographic by the FAOSomalia reputation over the past five years, the Horn of Africa country has been impressive in its livestock production and export figures. In 2011, almost 4 million exported and Somalia was the world’s leading exporter of sheep and goats. Second was Sudan – with over a million less in numbers exported.Recently, the livestock sector is the largest contributor to Somali livelihoods with over 65% of the population engaged in some way in the industry and the number is due to increase as the Somali government and partners begin to identify other opportunities to derive added value from livestock by-products.

One example is to transform the tonnes of bones that are discarded as a result of the booming livestock trade. The marrow from some of these bones are being used by various projects in the country to make soap.

In Hargeisa, Somaliland, this has been a great success, particularly in relation to female training and employment, and because the locally-made soap retails at a lower price as compared to imported soap, it has become very popular. The high domestic demand was also attributed to the soap being entirely organic.

In May 2015 the FAO has launched a programme to start training 150 Somalis in curing leather, a potentially lucrative opportunity for the entire livestock sector, while an EU-funded programme is currently underway to improve milk quality in northwestern Somalia, one of the country’s main milk production regions.

According to the FAO, this booming trade has been supported by financial support from the European Union and the UK government over the past years, and engagement with the Somali government to ensure heavy investment in livestock infrastructure, fodder production and livestock vaccination and treatment services – essential to tackling trans-boundary animal diseases which have been a major point of attention because they can kill large numbers of animals, resulting in food shortages, market disruptions and trade and export barriers.

Livestock are shipped to various countries in the Arabian peninsula, and trekked or transported to markets in Kenya, Djibouti, and Ethiopia. Livestock also enter Somalia through the borders with Ethiopia and Kenya.