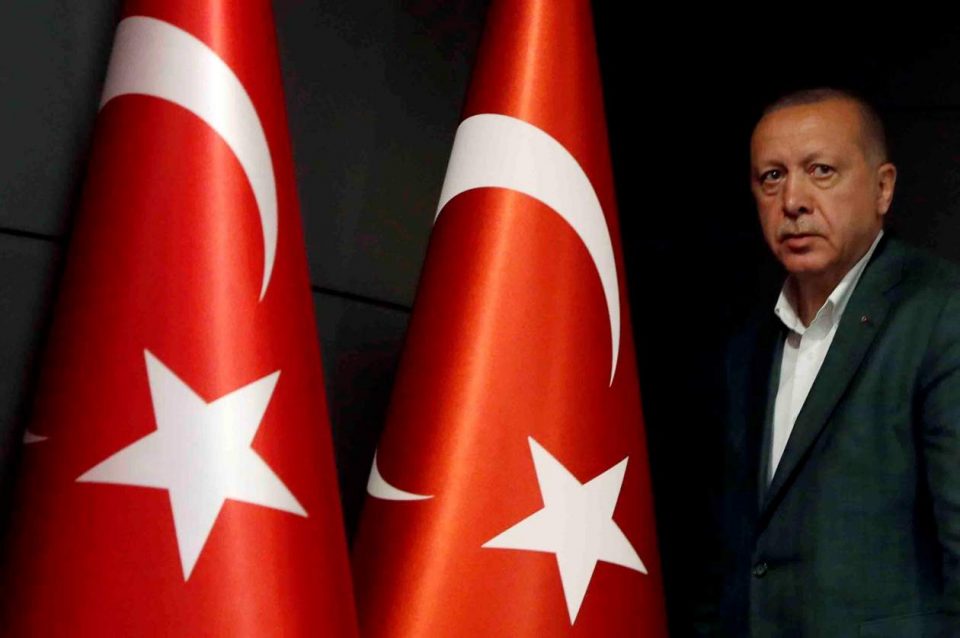 As Recep Erdogan sends Turkish troops and Syrian rebel fighters into Libya, it has become clear that the Syrian forces Turkey-backed were never meant to fight against Assad but instead do Turkey’s bidding.

As the Syrian military backed by the Russian air force takes another strategic town in Idlib, thereby inching closer towards the Turkish border, the endgame for Turkey in Syria has begun. The Syrian government has also taken the key highway that links Damascus to Aleppo and secured Aleppo from the incoming Turkish backed rebel artillery. Diplomatically the first acknowledged meeting between the Turkish and Syrian intelligence chiefs in Moscow just over a week ago heralded the final act in Erdogan’s quest to knock over President Bashar al-Assad. Not only has he failed in dislodging Assad, but he has also failed to convince the Russians to see the Turkish perspective. Despite the otherwise growing Turkish and Russian economic and defense ties, in Idlib and more broadly speaking Syria, Russia has no love lost for Turkey. However, given Turkey’s other problems in the Mediterranean, there is not much sympathy for Turkey’s perspective when it comes to Syria. Russia is Turkey’s only bet in Syria, and Putin has acted firmly thereby forcing Erdogan’s hand to reach out Assad, as Ankara runs out of options. Despite the bravado and Turkish insistence on forcing Damascus out, on the ground the Russian promise to provide victory to Syrian forces has come good. And as Turkey lost ground in Syria, two of its major regional rivals, Saudi Arabia and the UAE made further moves to come closer to supporting Assad.

As the fallout of the Turkish invasion of Northern Syria enraged NATO and the United States, one thing has become clear Assad’s comeback is near complete thanks in a large part due to Russian backing but also a deft play of his own strategic patience, especially with the Syrian Kurds. As Erdogan sends Turkish troops and Syrian rebel fighters into Libya, it is clear the Syrian forces Turkey-backed were never meant to fight against Assad but instead do Turkey’s bidding. Furthermore, Erdogan’s Turkey, once seen as a model democracy for the Arab world, has been completely ostracised.

In fact, the Arab League recently said that Turkey must stay out of Arab affairs, especially when it comes to Syria. The same Arab League that condemned Assad eight years ago is now ready to welcome him back so that he can control Syria and wield influence over the Arab region. They would rather have him than Erdogan. For Erdogan, it is a complete reversal and defeat as Assad has not just survived but has made a regional comeback with the UAE, Bahrain, Egypt and Oman all engaging with him positively. For Erdogan, it is a bitter pill to swallow as once it was Assad that had helped calm the Kurdish situation after expelling the PKK from Syria and the Beqaa Valley in Lebanon. Turkey’s fate in Syria is in Russian hands and the Russians will need to make a deal with Assad, something which can only be described as a defeat for Erdogan given his stated aim of ousting the Syrian president eight years ago.

Turkey needs a deal with the Syrians not just to handle the Kurdish situation but also counter the radical groups that could attack Turkey in a vicious blowback once Idlib falls. There is anger against Turkey over how it used Syrian fighters in Libya for its own goals rather than Syria.

Even before Operation Peace Spring, Erdogan was facing mounting internal and external pressure and criticism on multiple fronts including from the three founding members of his own AKP, former President Abdullah Gul and former Prime Minister Ahmet Davutoglu and the main architect of the AKP economic success, Ali Babacan. One can trace the beginning of the troubles for Turkey and Erdogan himself to the Syrian conflict. Once seen as the model form of a modern Muslim democracy that the Arab world should emulate, Erdogan made Turkey’s integration into the Arab world through Assad, with whom he forged close familial ties, calling him his brother.

Now as Assad, reasserts himself into the Arab world, Erdogan’s enemies such as Egypt, UAE and Bahrain are all reaching out to Damascus to push Turkey out of Arab affairs. Similarly, the Syrians under Assad had played a pivotal role to help Turkey fight the PKK, now that alliance and peace deal lies in tatters as Turkey is caught in the middle of America and Russia’s Kurdish diplomacy.

The personal ties between Assad and Erdogan that defined the Turkish Syrian relationship fell apart and with it many of Erdogan’s own factors that made him successful. Now Syria is the key Achilles heel for Erdogan. Furthermore, the news of a newly formed Armenian unit joining the SDF to take on the Turkish military echoes a repeat of a historic clash between Turks, Arabs, Armenians, Greek Orthodox and Kurds. The border set out in 1938 has always been contentious and everyone is once again uniting against the Turkish incursion into historic Syrian land. Assad, of course, has deftly played all the above cards against Erdogan.

In August 2010, during the peak of Erdogan’s close ties to Assad, at an election rally in Gaziantep, the then Turkish prime minister spoke of his appreciation of his brotherhood with Bashar, and how this was helping heal an almost one-hundred-year rift which centered around Gaziantep on the Turkish-Syrian border. Erdogan was, of course, referring to decades of near war-like scenario that existed between Ankara and Damascus.

Syria had for decades supported Kurdish, Armenian and other leftist groups consisting of Syriacs, Assyrians and other minorities who have never reconciled been driven out of their historic homeland i.e. modern Turkey. Sarah Shields, a professor at the University of North Carolina at Chapel Hill, in her book, Fezzes in the River: Identity Politics and European Diplomacy in the Middle East on the Eve of World War II, talks about how Ataturk had made it the most important objective to make sure the border towns of Turkey and then French mandate Syria do not go to a newly independent Arab state of Syria.

There is considerable evidence to suggest how the Turkish Republic manipulated the referendum according to Shields. Indeed, a collection of Ataturk’s views, titled Suriye ve Irak-Ataturk’un Kaleminden, and his speeches and writings on Syria and Iraq, made clear that he thought it would be better for Turkey to incorporate parts of Syria and Iraq into the Republic for security and social cohesion. In discussing Suriye ve Irak-Ataturk’un Kaleminden, former Turkish chief of general staff, Gen. Ilker Basbug, noted that, according to Ataturk, newly independent Arab states should at the very least form a confederation. According to Ataturk, if Turkey and newly independent Syria and Iraq could form a union, then this would ward off further civil strife between Arabs, Turks, Armenians and Kurds.

The Syrians have never forgotten that historic lands belonging to them were in their views usurped by Turkey. These cities not by coincidence became the front line for Turkey in the current war. Furthermore a careful read of, Reconstructing Armenia in Syria and Lebanon by Nicola Migliorino goes into some detail about how cities like Aleppo, Homs and Deir ez-Zor in modern-day Syria became bastions of what was left of the Armenian communities driven out one hundred years ago. The Syriacs and Orthodox people that came to settle with the already established ancient Armenian and Aramaic and Syriac speaking Syrians had every reason to back any groups fighting Turkey. Syria exploited this to its full advantage along with the more widely covered Syrian support of the Kurdish PKK.

Do You Know What Happened Today In History?

In 2004, Assad upended decades of Syrian-Turkish mistrust over the border by becoming the first Syrian president to visit Ankara. He also accepted Turkish sovereignty over Hatay province and laid the foundation that would theoretically end all support to Kurdish, Armenian and leftist groups that were historically supported by Syria against the Turkish state. Assad also introduced Erdogan to Hamas and other Palestinian groups thereby making Turkey a frontline player in the Arab-Israeli conflict. Syria also had an impact on historic Turkish-Israeli ties, something that continues to this day. Basbug, the former Turkish army chief, confirmed that the Syrian military intelligence gave up support to PKK and Ocalan. Soner Cagaptay, in his book The New Sultan, also discusses how Syria stopped support to the Kurdistan Workers’ Party, thereby leading to stability between Ankara and the Kurds and contributing to the friendship between Assad and Erdogan.

Erdogan forced to give in

Erdogan has not been able to contain the opposition both from his own party and the opposition over the fall out of the war in Syria. Issues related to the Kurdish peace process, the economic burden of the Syrian refugees, the cost of the Turkish military encroachment, and the unnecessary interference in Syria, including the personal fight with Assad, have come up again and again before the elections. Erdogan and the AKP are now openly saying they would tolerate Assad if he won a democratic election, a complete U-turn for Erdogan. They have also admitted that intelligence contacts exist between the two countries. Furthermore, as Erdogan looks to appease the Kurdish voters by allowing Ocalan to speak through letters recently. Ocalan, who was once supported by Damascus is now needed by Ankara and is saying there must be talks with Assad for a peaceful end to the Kurdish problem on both sides of the border. Armenians on the border and the Syriac Christians in Turkey and Syria both oppose further Turkish operations.

Antakya Christians and the Alawite community have also supported Assad over Erdogan further outlining how the border communities prefer Syria and Assad over Erdogan, this primarily due to events one hundred years ago. Erdogan giving in to Ocalan and opening up dialogue with Assad has clearly demonstrated that Damascus and Assad have used historical Syrian grievances to good effect. He has also galvanized Christian, Kurdish and Allawi support inside of Turkey including a deft way of using the Turkish opposition against Erdogan’s Syria policy. The CHP has opposed the politicization of the Turkish army operations in Syria and said Syrians should fight the war and not the Turkish Army, they have also called for a dialogue with Assad immediately. Erdogan has clearly lost his personal battle with Assad. He has also lost the major Arab players such as Egypt, UAE, Iraq and increasingly the Saudis to Assad.

Via- THE NATIONAL INTEREST

Africans should respond to Chinese racism with their pockets