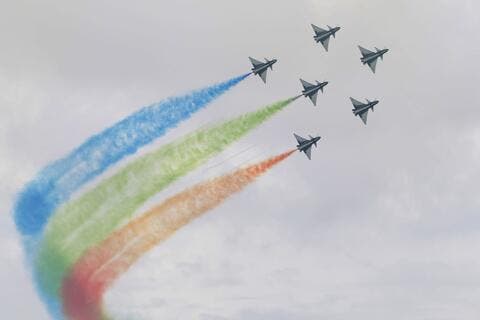 The statement said the aircraft were warned by radio and civil patrol aircraft and air defense missile systems were activated to monitor their activities.

The ministry said on Twitter yesterday that 52 fighter jets had flown into the southwestern region of the Air Defense Identification Zone (ADIZ) during the daytime.

With a total of 56 flights, it amounted to a “breach” involving the largest number of aircraft detected in a single day since September 2020, when Taiwan began keeping records.

On Oct. 1, China celebrates National Day, which marks the formation of the People’s Republic of China, and over three days, a total of 93 aircraft violated the area declared by Taiwan as an ADIZ.

China claims Taiwan as a “breakaway province” while Taipei has insisted on its independence since 1949.

Taiwan defines the ADIZ as an area that extends beyond its air space where air traffic controllers ask incoming aircraft to identify themselves.

The US on Monday sharply criticized the recent entry of the 52 Chinese warplanes into Taiwan’s air defense zone as a “provocative act,” saying the flights were “destabilizing.”

White House spokeswoman Jen Psaki said the flights “undermine regional peace and stability” and called on Beijing “to end its military, diplomatic and economic pressure and coercion against Taiwan.”

“We have an abiding interest in peace and stability across the Taiwan Strait. That’s why we will continue to assist Taiwan in maintaining a sufficient self-defense capability,” she told reporters.

“Our commitment to Taiwan is rock solid and contributes to the maintenance of peace and stability across the Taiwan Strait and within the region. We have been clear privately and publicly about our concern over the PRC’s pressure and coercion toward Taiwan, and we will continue to watch the situation very closely,” she added, referring to the People’s Republic of China.

Chinese response to US

However, Chinese Foreign Ministry spokeswoman Hua Chunying responded to US State Department spokesman Ned Price in a written statement, claiming Taiwan is dependent on China and the US is in no position to make comments on the issue.

“The assertions of the US side have been violating the ‘one China’ policy and…sending an extremely wrong and irresponsible signal,” the statement said.

The US has been selling weapons to Taiwan and strengthening its bonds with the island officially and militarily for a long time, said Hua, adding that US warplanes have been landing on the island and warships have been sailing through the Taiwan Strait.

“These provocative actions harm China-US relations and are detrimental to regional peace and stability. China is against them and is taking the necessary countermeasures,” she said.

Hua also underlined that China will take the necessary measures to prevent all attempts at Taiwan’s independence and will resolutely protect its national sovereignty and territorial integrity.

US wants change but not ‘rupture’ with Saudi Arabia: Blinken