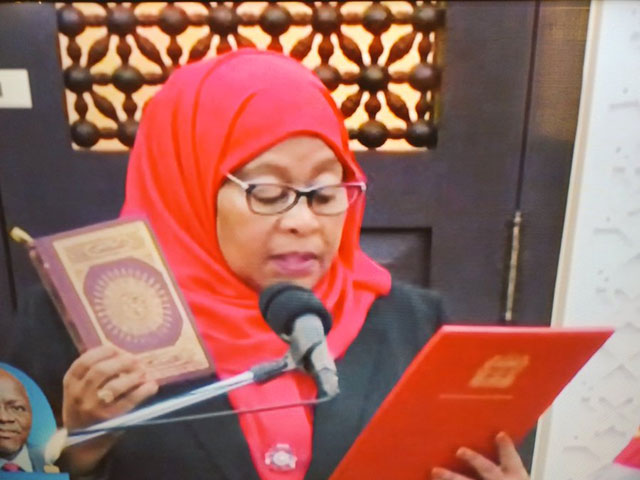 Samia Hassan Suluhu has been sworn in as Tanzania’s new president following the death of the Eastern country’s president, John Magufuli.

Taking her oath of office this Friday, Suluhu, dressed in a black suit and red headscarf before dignitaries at a ceremony in Dar es Salaam, said:

I, Samia Suluhu Hassan, promise to be honest and obey and protect the constitution of Tanzania.

Suluhu will serve as the president until the end of the current term as per the East African country’s constitution. The current term runs through 2025 as Magufuli who was initially elected in 2015 secured a second five-year term in polls in October last year.

The constitution also states that after consultation with their party, the new president will, in consultation with her party, propose a deputy, the choice to be confirmed by the votes of no fewer than 50 per cent of the National Assembly.

Samia Hassan Suluhu has on several occasions represented president Magufuli who made a few international trips since his election into office allegedly due to ailing health.

She attended various and huge conferences such as the African Union summits and United Nations meetings.