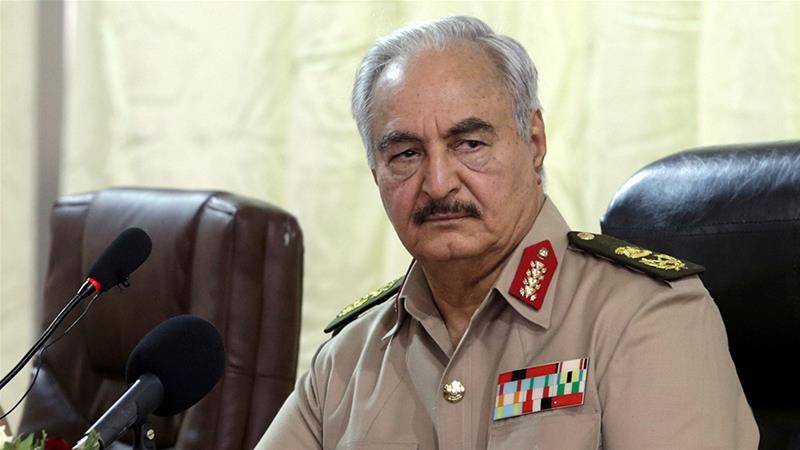 Libyan strongman Khalifa Haftar accepted an Egyptian-sponsored cease-fire and a political initiative to end the war he launched more than a year ago to seize the capital, Tripoli.

The step was announced Saturday at a ceremony in Cairo attended by Haftar, Egyptian President Abdel Fattah El-Sisi and Libyan parliament speaker Aguileh Saleh. The details of the deal were reported earlier by Bloomberg.

The peace initiative comes after a round of meetings in the Egyptian capital and a day after forces loyal to the internationally backed government in Tripoli took over Haftar’s remaining stronghold in western Libya, effectively defeating his self-styled Libyan National Army. The LNA still controls the east and south of the oil-rich North African state. Haftar has been supported by Russia, the United Arab Emirates and Egypt.

It wasn’t immediately clear if the Tripoli-based Government of National Accord would agree to the cease-fire, which Sisi said would begin Monday. While its forces said earlier Saturday they will build on their battlefield momentum to retake the central coastal city of Sirte and Hafar’s Juffra base in central Libya, the GNA has indicated it’s committed to United Nations-sponsored cease-fire talks.

Haftar has resisted previous long-term cease-fires, refusing to sign a deal in January at a meeting hosted by Russia. But his defeat in the west at the hands of Libyan government forces backed by Turkey has left him little choice but to accept a political initiative proposed by Saleh, whose eastern-based parliament is allied with Haftar. Saleh had opposed an attempt by Haftar last month to assume total control of the east, widening a rift between the two. Egypt had mediated an agreement between them over the past week.

Saleh’s initiative proposes a smaller presidential council in Tripoli to reform the one headed by Prime Minister Fayez al-Sarraj, with members chosen by electoral colleges from Libya’s east, west and south, the diplomats said. Haftar said on Saturday that he seeks a Libya with all its institutions unified. A spokesman for Sarraj couldn’t immediately provide comment.

Haftar’s forces, backed by more than 1,000 Russian mercenaries, had appeared poised to take the capital before a Turkish military intervention turned the tide over the past two months. Arab and European diplomats had expressed concern that the country would now be divided into a Turkish-dominated west and a Russian-dominated east, where the U.S. says Moscow has sent a fleet of jet fighters to support its mercenaries and the LNA.

A cease-fire could open the door for a gradual resumption of oil production in Libya, which is home to Africa’s largest reserves. Output has dropped more than 1 million barrels a day since Haftar’s supporters blockaded facilities in the country’s east in mid-January, a move that has had the inadvertent effect of helping OPEC+ rebalance the market. A key valve controlling the pipeline linking Libya’s largest oilfield, El Sharara, was reopened on Friday. The oilfield remains shut, though, and it’s unclear when pumping will restart.

In a new novel, Faduma Yusuf shows how immigrants are taking charge of their own narrative