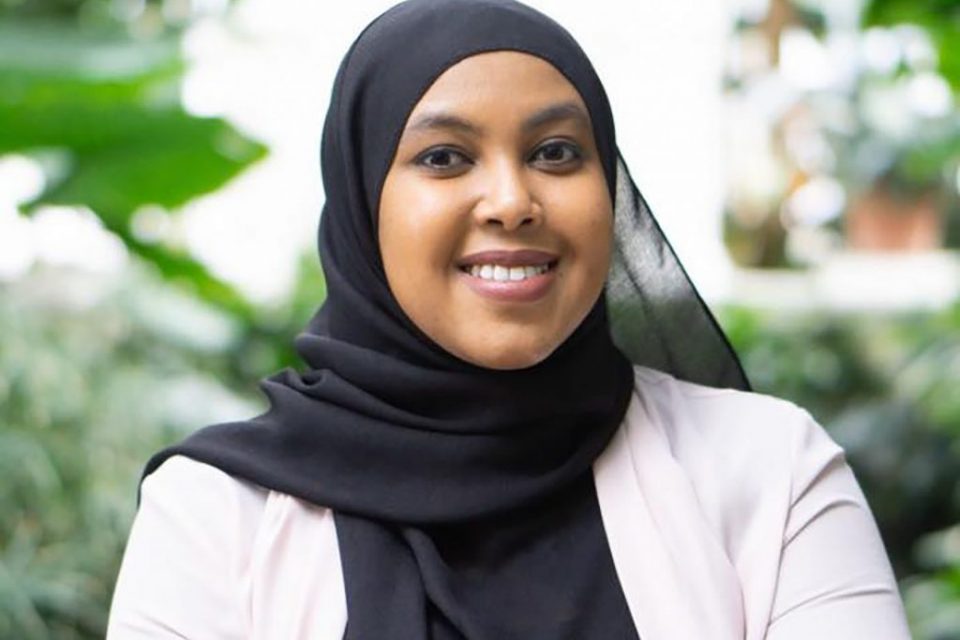 Soon after Fadumo Yusuf arrived in the United States as a teenager in 2006, she turned to public libraries in the Twin Cities for books that would help her improve her English. She checked out as many as she could and read them cover to cover, even if she didn’t understand everything.

But there were certain books that Fadumo could not find: Books about the experiences of Somali immigrants and refugees, especially stories about young people coming of age in the U.S. “I couldn’t find any books that I could see myself in, that spoke to the Somali-American experience,” she said. “That continued to be a little bit of frustration for me as time went on.”

In her junior year of high school, after Fadumo had learned enough English to express herself, she began to observe the people and the things around her and to put her thoughts and emotions down on paper. Writing at this point, she said, was merely an attempt “to process my emotions” and to better understand the world around her.

What started out as a therapeutic writing routine a dozen years ago became last week a published 220-page novel, “Ayan, of the Lucky.” The book chronicles the journey of a young Somali girl, Ayan Raage, who begins life as a goat herder in Somalia and eventually ends up in the U.S. with her mother- and sisters-in-laws as a refugee aspiring to become a doctor. It follows her from her remote village to Mogadishu to Nairobi and on to Minneapolis.

Hers is one of the first — if not the first — English-language novel featuring stories and experiences of Minnesota-based Somali characters. It joins a list of over a dozen memoirs, non-fiction and children’s books that have been published in the past several years.

‘When I write, I write from my heart’

Fadumo started to take writing seriously around 2008 while at Edison High School in Minneapolis. Though her main goal then was to get her thoughts and feelings down on paper, her work continued to develop.

In the beginning, Fadumo wouldn’t let friends see her work, let alone think about exposing it to a critical public eye. “When I write, I write from my heart,” she said in a recent Zoom interview. “Sharing your deepest inner thoughts with people and the world is a little bit scary because you don’t really know what the reaction is going to be.”

Yet she never lost sight of her passion for storytelling. During the day, Fadumo worked – and still works — as an engineer at Boston Scientific, a mechanical device industry; at night, she wrote poems and short stories and continued working on what would later become “Ayan, of the Lucky,” with no solid plans to publish.

As more of her friends learned about her writing projects, they encouraged her to share them with readers — Somalis and non-Somalis — who might be interested in learning about the Somali traditions and experiences she describes so passionately.

So in 2018, Fadumo wrote two short stories for The Children’s Theatre Company in Minneapolis. A year later, she created a blog, fadumoyusuf.com, to showcase her writing and share her thoughts in both Somali and English. In one post last June, she wrote about how “insecurities are learned” and encouraged her readers to “unlearn them.”

In another, she discussed the significance poets have for Somalis. “Poetry has impacted every aspect of life of the Somali community for centuries,” she wrote. “Poetry was used to de-escalate conflict, to call for peace, to call for war, to give advice and pass down wisdom, to teach Islam and to celebrate special occasions like weddings, just to name a few.”

In early 2019, Fadumo contributed an essay to a book-length collection of stories about the experiences of Minnesota immigrants in the STEM field. The collection was published in February by Green Card Voice, a local nonprofit that provides immigrants and refugees a platform to share their narratives.

Green Card Voice put out an open call for nominations of potential immigrant professionals in STEM to contribute to the book. “Fadumo was the most nominated person,” said Tea Rozman-Clark, the organization’s executive director. “People from several different circles nominated her.”

The more Fadumo shared her essays, short stories and poems, the more positive feedback she received. She started looking forward to what had once been a terrifying experience.

This paved the way for her decision last year to pursue publishing her novel. “The year 2019 was a turning point for me,” Fadumo said. “It was when I said, ‘I’m ready to share my writing.’”

In May, “Ayan, of the Lucky” came into being.

Lily Coyle, owner of the St. Paul-based Beaver’s Pond Press, which published the book, praised Fadumo as a skilled storyteller. Coyle said her plan was to read a chapter or two of the book to get a sense of it, as she does with all manuscripts. “I just couldn’t stop reading,” she said. “It was so compelling.”

“Ayan, of the Lucky” chronicles the story of a girl whose life begins in a remote Somali village, where she herds goats and sheep. Lured by opportunities in the big city, she then moves to Mogadishu to pursue her dream of becoming a doctor

But the 1991 civil war in Somalia forces her to escape to Nairobi. Here, Ayan secures a job as a maid for a middle-class Somali family. She then falls in love and marries Awale, the oldest son of the family for which she works.

Soon after, immigration puts a halt to this new love. Ayan embarks on a refugee resettlement process with Awale’s mother and sisters to come to Minnesota, home to the largest Somali population in the U.S. Awale, part of a separate resettlement case, is left behind.

In the opening pages, Fadumo puts her protagonist in one of the most famous landmarks in Minneapolis: Riverside Plaza, the tall multi-colored towers in the Cedar-Riverside neighborhood. On an early fall morning, Ayan tiptoes out of the bedroom she shares with her three sisters-in-law to catch the yellow school bus outside the building.

“Why is there no building A,” Ayan asks herself. “And how did they go from F to M building?”

The story of “Ayan, of the Lucky” is a story of love and loss, peace and conflict, culture and politics, and courage and determination. It’s a story that mirrors the experiences of thousands of Somali people in Minnesota, including Fadumo’s own. “It parallels my own experience, coming from East Africa and coming to Minneapolis,” she said. “I really wanted to write authentic stories that capture some of the experiences of our people.”

‘These kinds of sources are just fundamental’

Fadumo’s novel is the latest of more than a dozen books published within the past seven years by Minnesota-educated Somalis, which even include a comic book that capture the history and experiences of the Somali community in the state.

Coyle said that she’s noticed more African immigrants, especially Somalis, taking charge of their own narratives. In the past, white Americans who worked with immigrant communities did most of the writing, she said. Immigrants are now telling their stories in their own voices. “It’s just beautiful,” she said.

Heather Akou, an associate professor at Indiana University and author of “The Politics of Dress in Somali Culture,” said the publications provide not just a nuanced understanding of the history and culture of Somalis, they give scholars content needed to investigate and analyze their experiences.

In the early 2000s, Akou was a Ph.D. student at the University of Minnesota, writing her dissertation on the history and politics of dress practices in the Somali culture. At the time, as Akou made the rounds in bookstores and public libraries, she felt what young Fadumo felt in 2006: a dearth of publications on Somalis in Minnesota.

“These kinds of primary sources,” she said, “are going to be incredibly valuable for future research.”

For Fadumo, “Ayan, of the Lucky” fills the void she noted as a young girl trying to find books about her community in public libraries. It also helps, she said, non-Somalis to have a better understanding of their new neighbors.

“I wanted to contribute to the American immigrant-refugee narrative,” Fadumo said. “I wanted to reach to the wider American community — so they can also learn about some of the Somali culture and lifestyles.”

Ibrahim Hirsi is a reporter at Sahan Journal, where he covers immigrant communities and the politics and policies that affect them. He was previously a staff writer for MinnPost and MPR News. Ibrahim got… More by Ibrahim Hirsi