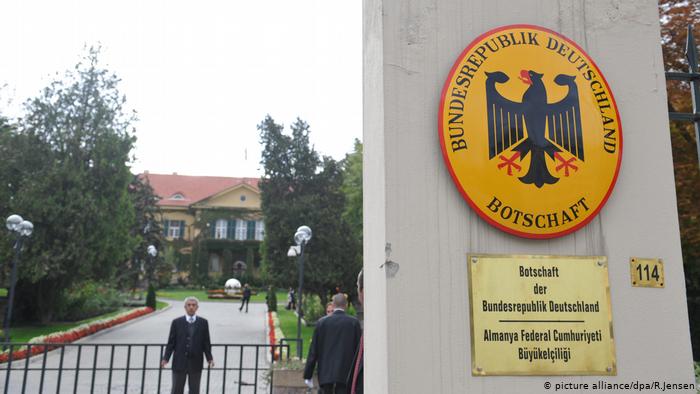 Turkish authorities have charged a lawyer working for the German embassy in Ankara with espionage, further-straining the already tense relationship between the two North Atlantic Treaty Organization allies. German newsmagazine Der Spiegel, which reported on the arrest, did not name the lawyer, but said he is a Turkish citizen and was arrested in September.

The newsmagazine said the lawyer had been hired by the German embassy to obtain information about Turkish citizens who had applied for political asylum in Germany. German authorities would regularly give the lawyer identifying information about asylum applicants. The lawyer would then verify with Turkish police that the applicants had a blank criminal record and were not wanted for participation in criminal activity. The German embassy would then forward the information collected by the lawyer to the German Federal Office for Migration and Refugees (known in Germany as BAMF), which would subsequently approve or reject the asylum applications.

Following the lawyer’s arrest by the Turkish National Intelligence Service (MİT), German authorities are concerned that the Turkish government has seized identifying information on at least 50 Turkish applicants for political asylum in Germany. Some of these applicants are reportedly members of Turkey’s persecuted Kurdish minority. Others are alleged supporters of Fethullah Gülen a United States-based former political ally of Turkish President Recep Tayyip Erdoğan, who Turkey accuses of having orchestrated the failed 2016 military coup against Erdoğan.

The German Foreign Office has described the lawyer’s arrest as “incomprehensible” and has reportedly warned those asylum seekers affected by it that their safety may be endangered. Meanwhile, German diplomats are engaged in high-level talks with the Turkish government to secure the lawyer’s release, according to Spiegel. The effort is being led by no other than Martin Erdmann, a veteran diplomat who is serving as Germany’s ambassador to Turkey.