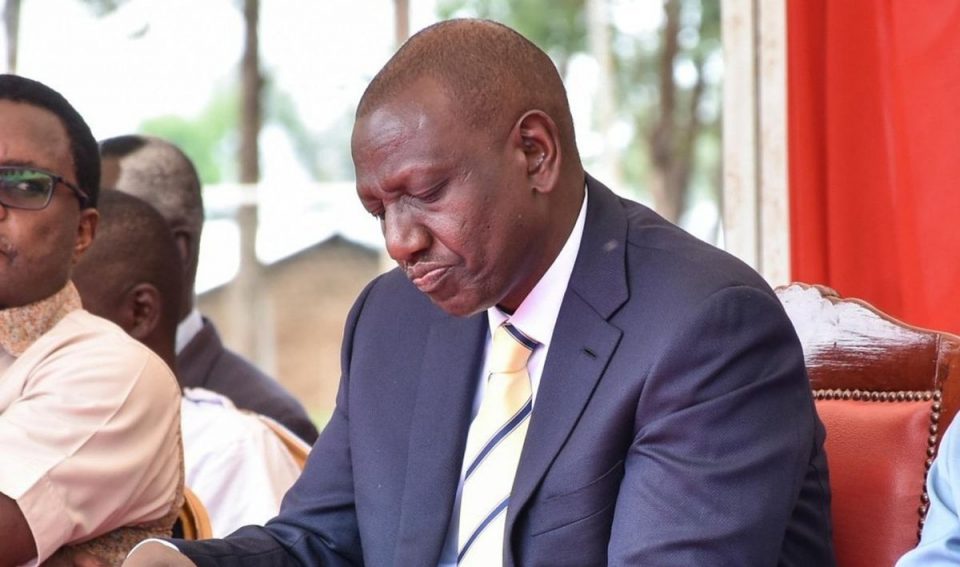 The rift in the Presidency, with President Uhuru Kenyatta and senior State officials on one side and Deputy President William Ruto on the other, appears to be playing out in the planning of the State funeral of former President Daniel arap Moi.

With President Kenyatta in the US, Dr Ruto is constitutionally mandated to be in command. However, this has not been reflected in events following President Kenyatta’s proclamation of Mzee Moi’s death. The DP appears isolated, with a team led by Interior Cabinet Secretary Fred Matiang’i taking full charge.

On Tuesday, the DP cut the image of an isolated man when he called the press to read the government’s condolences to the family and friends of the late President Moi.

He stood alone and eulogised Moi. A stark contrast from the elaborate display by the military and government officials at the Lee Funeral Home.

After the press conference, Dr Ruto was driven to Lee Funeral Home. While his itinerary was made public well in advance, the government officials were nowhere in sight; also missing were the military bosses.

Dr Ruto walked into the morgue with a battery of MPs and Rift Valley leaders, but he was told he could not view the body.

The body was being embalmed and could not be viewed.

The agitated crowd swore, cursed and threatened but the attendant would not budge. Dr Ruto asked the angry crowd to step out so that he could have a private session with the attendant, but this did not yield fruit. He left the mortuary and flew to Kakamega.

“Immediately after the DP arrived at Lee Funeral home, a number of politicians he had come with and those who had gathered outside waiting for him to be driven in walked into the morgue together,” said a source who was present but asked not to be named.

“When we got in, we were ushered into an office with the DP being offered a chair. Some sat on empty chairs while some of us stood,” the source added.

Kapseret MP Oscar Sudi is said to have asked the management to allow the DP to view the body since he was to proceed to Kakamega where a tragic incident claimed the lives of 14 pupils on Monday evening.

“A mzungu whom we believed is the manager or owner of the facility listened to us briefly before making it known that the request could not be granted immediately,” said the source.

The mzungu went ahead and told the DP and his entourage that they had to be patient for at least one-and-a-half hours for the body to be ready for viewing.

But the politicians felt they were being sidelined with the political feud between Baringo Senator Gideon Moi and Dr Ruto playing out. The agitated lot pressed on, but did not get access.

“When it became apparent to Dr Ruto and his team that they would not be allowed to view the body, the DP ordered everyone out and requested to be left alone with the mzungu,” an MP who was present said.

“A minute later, the DP also came out of the facility having not viewed the body like the rest of us,” said the source.

Mr Bett, a former Roads Minister, told the Nation last evening that he was among those at Lee Funeral Home at the time.

“When the DP arrived, I had just concluded an interview with one of the TV stations. I greeted him and we proceeded inside the facility,” said Mr Bett.

“I found the explanation given by the management on preparation of the body as genuine with no political undertones or arm-twisting. I run a hospital with a similar facility in Kericho, and I understand when a body is being prepared. It is a messy affair and cannot be viewed.

“Anyone trying to bring in politics is being malicious. You must remember that the DP was warmly received by the Moi family when he flew in the evening from Kakamega,” Mr Bett said.

Yesterday’s event has brought to the fore Dr Ruto’s many battles in government and politics.

Evidently, the isolation of the DP in the running of government and his political rivalry with the Baringo Senator have conspired to humiliate and exclude him from taking part in preparations for the burial of the retired President.

In a weird turn of events where State protocol and the provisions in the Constitution were seemingly thrown out the window, the DP found himself stuck away from the centre of things after the death.

President Kenyatta, as expected of the law, made a presidential proclamation early in the morning announcing that Mr Moi had died and that there will be a period of national mourning until the former Head of State is buried.

Mr Kenyatta is currently in the US with ODM leader Raila Odinga on the invitation of the American government to attend the country’s 68th national prayer breakfast meeting, which started yesterday and is set to end today.

About 2,000 international guests, including political and business leaders, are attending the prayer breakfast, whose theme is “Reconciliation, Faith and Peace Building”. It has been organised by the Fellowship Foundation in Washington, DC.

Naturally, as stated in the Constitution in Article 147, Dr Ruto, who is assumed to be in charge, should have been the one coordinating issues surrounding Mr Moi’s death.

“When the President is absent or is temporarily incapacitated, and during any other period that the President decides, the Deputy President shall act as the President,” says Article 147 of the Constitution.

What happened on Tuesday though, once again exposed the widening divide between President Kenyatta and his deputy. Matters were made worse by the fact that Dr Ruto and the Baringo Senator, who are both fighting for political supremacy in the Rift Valley, do not see eye to eye.

The Deputy President was on two occasions prevented from meeting Mr Moi when he was ailing and later when Jonathan Moi died. In April last year, the DP opted to go to Jonathan’s Kabimoi home to offer his condolences instead of going to Kabarak to condole with Mr Moi like other leaders.

In May the previous year, Dr Ruto waited for two hours on the tarmac after landing in Kabarak hoping to meet Mr Moi, only to be told he had a doctor’s appointment.

The DP, who had initially planned to go straight to the Lee Funeral Home after leaving his house in Karen, decided along the way to head to his Harambee House Annex office.

“We are the people we are today because of retired President Daniel arap Moi.

He had the vision, acumen, thorough knowledge and unmatched will in tackling our problems,” said Dr Ruto in his press conference.

After the press conference, Dr Ruto hurriedly left for the funeral home, about two kilometres from his office.

But as the DP drove to Lee, the security service commanders, together with Dr Matiangi and Moi family members, left the funeral home and drove in the opposite direction.

A meeting was then convened and chaired by Dr Matiang’i that was attended by Gen Mwathethe, Defence CS Monica Juma, Mr Mutyambai, Mr Kibicho, all heads of security agencies as well as service commanders.

“A State funeral committee chaired by the Head of Public Service as directed by President Kenyatta will issue a comprehensive statement in the course of the day,” announced Dr Matiang’i of the outcome of the meeting.

Later in the evening, a source at Kabarnet Gardens told the Nation: “We have allowed him to land”. The DP condoled with the family into the night.

Kenyans in panic-Buying tendency ahead of polling date