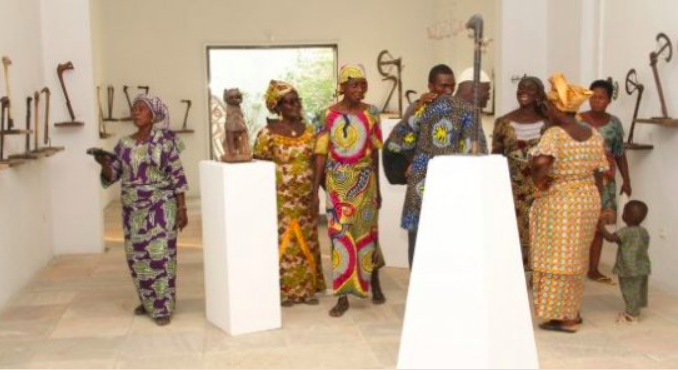 One year after the findings of the Sarr-Savoy report were presented to French President Emmanuel Macron, the repatriation of artworks and artefacts looted during the colonial era is still not on the agenda. A long road is ahead.

On 17 January, 28 sceptres from the 19th century left France in the direction of Benin. Today, they are on display at the Petit Musée de la Récade in Abomey-Calavi, near Cotonou.

Like many others, these originated in the ancient kingdom of Abomey, which was conquered and sacked by troops under the command of French General Alfred Dodds in 1892.

More than a year after a report was presented to French President Emmanuel Macron on 23 November 2018 in which Bénédicte Savoy and Felwine Sarr recommended that a significant portion of the African artworks and artefacts exhibited or stored in French museums be repatriated to their country of origin, has the process finally begun? Not at all.

The repatriation of 28 sceptres to Benin was part of a private initiative of a group of Paris-based antique dealers and art collectors. As such, this particular case is completely unrelated to the commitments Macron made in Ouagadougou in November 2017 and renewed in 2018. It also is in no way related to a promise made in December 2019 by the French Minister of Culture, Franck Riester, during a visit to Cotonou, to return 26 artefacts from the Abomey looting no later than 2021.

The dispute is not easy for non-experts to digestt but serves above all as a reminder that more than one year after the release of the Sarr-Savoy report, the matter of repatriating African artworks and artefacts exhibited in France has made little headway.

The restitution of Omar Saidou Tall’s sabre in November 2019 to Senegal’s president during a visit from French Prime Minister Edouard Philippe was met with more criticism than gratification when it came to light that the sabre was merely being loaned for a period of five years and that, worse still, the returned artefact was perhaps not the one Senegal had expected.

In the summer of 2019, Benin announced that it was not ready to receive the 26 artefacts it had requested France to return, which only fuelled the fire of those who oppose repatriating such objects, especially those who insist that Africa does not yet have the capacity to exhibit works in suitable conditions.

In addition, the situation in France is not helping matters, as Emmanuel Pierrat, a lawyer, points out: “Macron made some big promises to Benin and then the weekend after that, the ‘yellow vest’ movement began and his government got distracted. In my opinion, current events allowed him to escape the quagmire he had gotten himself in.”

“Everything goes in and nothing comes out”

Has the process fallen into a rut and is the Sarr-Savoy report destined to be forgotten?

Professor Louis-Georges Tin, the President of the Representative Council of France’s Black Associations (Conseil représentatif des associations noires de France – CRAN) and a fervent supporter of repatriating African artworks and artefacts, does not think so: “It’s true that France is dragging its feet a bit, but outside of France things are moving forward. We are in touch with many American organisations and leading figures who want to work together to promote the return of many African artefacts exhibited in major US museums. And, above all, even though the French media barely covered it, on 26 March 2019, the European Parliament adopted a resolution in favour of restitution.”

In the text in question, “Fundamental rights of people of African descent,” the European Parliament “encourages” EU member states to provide “reparations such as offering public apologies and the restitution of stolen artefacts to their countries of origin.” It remains unclear if there is a timeline and under what form the recommendation will be transposed into national law.

France is in a particularly interesting position given that, in a way, it initiated the movement. The pro- and anti-restitution debate remains as heated as always there, the Sarr-Savoy report continues to be harshly criticised and, in the absence of any political will, has for the time being not led to any concrete action.

According to Mr Pierrat, “Macron said some interesting things about colonisation, but during the speech he gave in Ouagadougou I think he fell into the demagoguery trap. He was overexcited and I think the advisor who wrote his speech was excessively confident.”

In Paris, the president’s declarations were met with fierce resistance by a number of museum curators who, as an expert commented, “have only one way of thinking: everything goes in and nothing comes out.” This vision also seems to be shared by the Ministry of Culture, as Mr Tin confirmed with a tinge of resentment: “The minister is from the right and rather conservative. He talks about ‘circulation’ rather than ‘restitution’. He won’t allow himself to contradict the president, but I think he’s against restitution.”

Many of the people who balk at the idea of returning artefacts to Africa highlight the French legal environment, explaining that the legislative framework suggested in the Sarr-Savoy report is far-fetched and unenforceable. Does a general law revisiting the inalienable nature of artefacts exhibited in French museums need to be adopted? Or should laws be made on an ad hoc, case-by-case basis?

The announcement of the future dismantling of the National Scientific Commission of Museums of France (Commission scientifique nationale des collections – CSNC), meant to provide input on the reclassification of exhibited works – a necessary step in the restitution process – also created a controversy within a controversy.

Senator Catherine Morin-Desailly, who formed the commission and is preparing a report on the topic, is particularly critical of the move: “The purpose of this body was to establish sound reclassification criteria, but it was never given what it needed to carry out this work. Its members were not reimbursed for their travel expenses and the implementation orders took years to be released. The public authorities never provided what was necessary in order to compel museums to repatriate works when decisions along these lines were taken. Curators resisted our efforts, as did the Ministry of Culture.”

With 2020 barely under way, it seems that nothing has been accomplished and no one knows under what legal framework the artefacts promised to Benin can be transferred out of France’s national museums. According to Mr Tin, “In any case, it’s not a legal issue, but a political one. When France wanted to return artefacts to China and Algeria, it didn’t burden itself with these questions. There’s simply an imbalance of power in this case.”

When such an imbalance of power exists, other routes are possible, as French lawyer Richard Sédillot, who has on several occasions argued cases involving African artefacts for private clients, points out: “Some states prefer to go the transactional route and find a way to make a deal and request restitutions on a case-by-case basis. I think that’s the best solution.”

Several countries have launched initiatives that could lead to the repatriation of artefacts to Africa. In the UK, the Manchester Museum announced that it planned to return certain items, but wanted to find the heirs of the persons from which they were stolen.

Côte d’Ivoire compiled a list of artefacts it would like to recover from France, including the famous “Djidji Ayokwe” talking drum of the Tchaman people.

Other countries, inspired by an initiative Ghana launched in 2019, are entertaining the idea of leveraging the 60th anniversary of independence to make 2020 the “year of returns” in Africa. The return of people, but also the return of artefacts and artworks.

The article originally published in The Africa Report
previous post