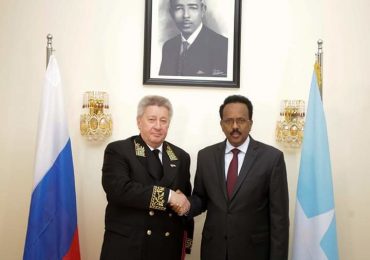 The Horn of Africa has a strategically good location; the Red Sea and the Gulf of Aden are connected on its territory, all ships heading to the Suez Canal pass through this navigable area. Due to this arrangement, France, the USA and China have opened their military bases there.

Though 12% of the global volume of sea cargo transportation and transportation of 30% of hydrocarbons pass this area Russia does not consider the port of Berbera to deploy a military base and neither have  Negotiations on this issue  been conducted with relevant authorities.

This denial despite fears of such a quest by among others the USA government  fronted by its Djibouti based Africa command-AFRICOM, this is the first official word from the Russians on the matter

Q- What kind of challenges do you have in representing Russia in Djibouti and Somalia?

Amb Golovanov -The cooperation between Russia and Djibouti relies on bonds of friendship based on mutual respect and consideration of each other’s interests. In 2018, we celebrated the 40th anniversary of the establishment of diplomatic relations between our countries, and all these years, the Russian Embassy has been developing the whole complex of Russian-Djiboutian ties. In addition, we keep constant contacts with the Ministry for Foreign Affairs of Djibouti to work on convergence of approaches of both countries, including within the UN and its specialized agencies. For example, during plenary meetings of the 74th UN General Assembly, the Djiboutian Side has supported Russian resolutions on prevention of an arms race in outer space, fight against the glorification of Nazism, strengthening and developing the arms control System and its treaties, and the use of information and communication technologies for criminal purposes.

In addition, cultural ties are also being developed. For example, there is an ongoing discussion about the opportunity to establish twinning between Djibouti City and one of the Russian cities. A project regarding installation of a bust of Yuri Gagarin, a Soviet cosmonaut, is under way. It will be installed in the center of Djiboutian capital on the occasion of the 60th anniversary of the first manned space flight that will be celebrated by the UN on April 12, 2021.

As for Russian-Somalian relations, they are based on a long-standing relationship. Previously, the Soviet Union has provided significant assistance to the process of the formation of Somalian statehood during the first years of its independence. It was then, in the 1960s, that interaction was established in the political, trade, economic, military and other fields. Our country has supplied machinery and equipment to Somalia, and has also provided assistance in the construction of infrastructure facilities. More than 20 thousand Somalis have been educated in the USSR, and hundreds of our specialists have worked in Somalia. The Somalian Side Highly appreciates Russia’s foreign policy and advocates restoring the previous level of relations with our country.

However, the security situation in the Federal Republic of Somalia is currently unstable. The Federal Government of Somalia is facing many challenges, including stalling of the dialogue between Mogadishu and federal member states. The current situation is exacerbated by the activities of the terrorist group Al-Shabab, that continues to increase its destructive activity, including trafficking in people, weapons and drugs in the run-up to the general parliamentary and presidential elections scheduled for late 2020 – early 2021.

Somalia has the potential for cooperation in the fields of energy, hydrocarbons exploration and exploitation, mining, fisheries and agriculture. However, above all, it is necessary to provide security in order to ensure the presence and work of Russian business in that country. It is precisely this factor, coupled with the unfavourable socio-economic situation (according to the UN Human Development Index, Somalia is one of the poorest countries in the world) that has been complicating the establishment of Russian-Somalian trade and economic ties.

Q- The Djiboutian authorities have repeatedly stated that they are in favour of expanding partnership with Russia. In what areas it is planned to expand cooperation? What joint projects with Russia could be launched in the near future?

A- Business contacts have intensified largely due to the Russia-Africa Summit held on October 23-24, 2019. H.E. Ismail Omar Guelleh, President of Djibouti, said that the summit in Sochi “marks a new stage in relations between Russia and Africa”, and has invited Russian businessmen to visit the Republic of Djibouti to examine its potential investment opportunities.

With the assistance of the Russian Embassy on the sidelines of the Russia-Africa Economic Forum in Sochi a memorandum of understanding was signed between the Chambers of Commerce of Russia and Djibouti. Then the both Sides agreed on a working visit of a delegation of Russian businessmen to participate in a bilateral business forum in the first half of 2020.

I would like to note that, despite its small size, the Republic of Djibouti has significant potential for those Russian companies that seek to enter the African market. The volume of foreign direct investment in Djibouti has amounted to $223 million over the past year. In addition, the Djibouti International Free Trade Zone has been operating since July 2018.  Its administration offers businessmen comfortable conditions — ready-made infrastructure and communications, tax breaks, the ability to draw on foreign labour.

We are currently working on the organization of negotiations between the delegation of the Russian Trade and Production Union (Krasnodar Krai) and Djiboutian partners. The representatives of that business structure are interested in the exportation of steel constructions, pipe products, as well as multi-purpose electrical equipment (civil aviation, shipbuilding, railway transport, mechanical engineering, energy, agriculture, medicine, IT technology, cybersecurity, industrial robotics and other industries) to African markets, including Djibouti.

Q- Yonis Ali Guedi, Djiboutian Minister of Energy in charge of Natural Resources, previously has invited Russian investors to work in the state’s energy sector. According to him, the state pays particular attention to the development of renewable energy sources. Did Djibouti manage to attract Russian investors? What areas may still be of interest to Russia?

A- Yes, indeed, Djibouti can generate over 300 MW of energy from renewable sources.  However,  there  are  several  issues —  lack  of coordination,  poor infrastructure, difficulties in accessing the local market for independent electricity producers, however, the authorities plan to remove these obstacles. In general, the development of alternative energy is a promising area of the Djiboutian economy. An attraction of Russian investments in the energy sector of Djibouti is under examination.

A sphere of information and communication technologies is also promising for Russian companies. Due to its favourable location, the role of Djibouti in providing high-speed Internet access in the East-African region and the whole world is growing. Djibouti is connected by seven submarine cables bringing Africa, Asia, the

Middle East and Europe together. The state-owned telecommunications company “Djibouti Telecom” is laying the DARE-1 deep-sea fibre-optic cable passing through Djibouti, Kenya and Somalia. The subsidiary export structure of the Ministry of Digital Development, Telecommunications and Mass Communications of Russia JSC “Rosinfokominvest” is interested in that project. A promising area of cooperation may also be infrastructure projects.

Q- Last October, the President of Djibouti H.E. Ismail Omar Guelleh reported that Moscow and Djibouti could expand cooperation in the field of tourism and logistics. What those projects are?

A- According to the Djiboutian state economic strategy “Vision-2035”, apart from logistical, commercial and communication development, tourism is also priority area. Official statistics states that over 74 thousand tourists visit Djibouti annually, and by 2030 it is planned to increase tourist flow to 500 thousand tourists a year. The development of tourism is complicated by an undeveloped road network and an insufficient number of hotel complexes with a high level of service. I would like to draw the attention of Russian businessmen to the tourist and recreational potential of the country — Djibouti has white sand beaches, salt lakes, natural parks, dormant volcanoes and diving sites. For example, the Gulf of Tadjoura has a rare site where during the period from the end of October to the end of February every year whale sharks swim about in search of plankton. Everyone can see them in the natural environment with his own eyes. So, the tourism industry of Djibouti is waiting for Its investors.

Q- Djibouti has a strategically good location; the Red Sea and the Gulf of Aden are connected on its territory, all ships heading to the Suez Canal pass through this navigable area. Due to this arrangement, France, the USA and China have opened their military bases there. How do you assess the prospects for the appearance of a Russian base in the region?

Q- According to a rating compiled by the Russian Maritime Union, Somalia belongs to the regions where today the highest pirate activity is observed. Does Russia plan to resume active military patrols in this region? Is question of conducting joint naval exercises to combat pirates considered? How relevant is this issue for Djibouti?

A- Russian ships patrol the Indian Ocean and the Gulf of Aden. Despite its internal stability, Djibouti continues to face security threats due to the crisis in neighbouring Somalia and Yemen. There is still a potential threat posed by terrorists who can enter the country from the sea. The Djiboutian sea borders therefore need round-the-clock protection. In addition, the strategically important location of Djibouti requires extra measures to ensure free navigation, as well as countering maritime piracy and seizure of civilian vessels. In this regard, the relevant coast guard units are constantly patrolling territorial waters in the narrowest part of the Bab-el-Mandeb Strait (38 kilometers), through which 12% of the global volume of sea cargo transportation and transportation of 30% of hydrocarbons pass.

A- In addition, terrorism remains a serious problem for Somalia. In late December, a major terrorist act took place in the capital of the state. Is Russia considering the possibility of joint military exercises with Somalia to combat terrorists?

A- The question of holding joint military exercises with Somalia to combat terrorism is not considered.

Q- Is Russia considering the Somaliland port of Berbera as a place to deploy a Russian military base there? Are negotiations already underway on this?

A- Russia does not consider the port of Berbera to deploy a military base. Negotiations on this issue are not conducted.

Q- East Africa is facing now a major invasion of locusts. Experts say that Somalia has not experienced such massive invasions for 25 years. According to the UN projections, by June 2020 the number of these insects may increase by 500 times. Can Russia help Somalia solve this problem, given the fact that our country already has experience in combating locusts? Did the Somali authorities request the Russian Side for support in this regard?

A- The Somali authorities did not contact us for support on this issue. At the same time, given the difficult humanitarian situation in Somalia, Russia continues to help the country and Somali refugees in neighbouring states through earmarked contributions to the UN World Food Program funds. In addition, the question of supplies to Somalia of anti-dysenteric and anti-typhoid vaccines through the Ministry of Industry and Trade of Russia is being studied