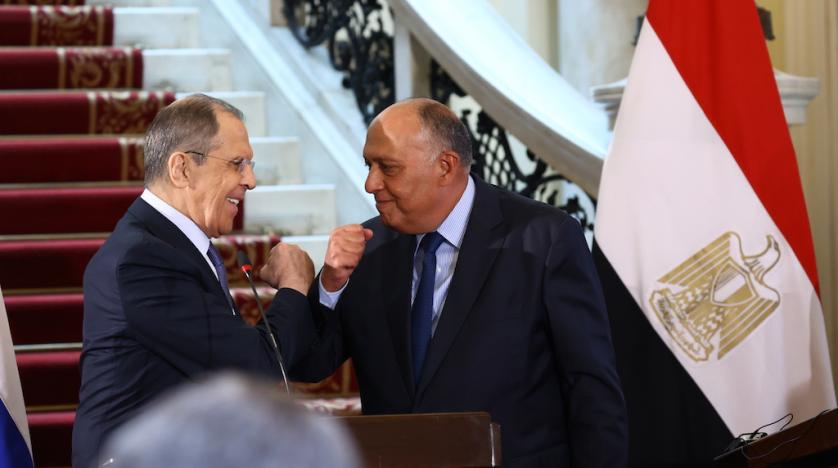 Russia said it was ready to help to set the right conditions for a settlement between Egypt, Sudan, and Ethiopia on the issue of the Grand Renaissance Ethiopian Dam (GERD), stressing that it was not mediating between the concerned parties.

Lavrov expressed Moscow’s readiness to coordinate to reach an agreement that fulfills the interests of the three countries and push the various parties to refrain from unilateral acts, according to Shoukry.

For his part, Shoukry said Egypt believes that Russia has the ability through its bilateral relations with the various parties to the GERD dispute to impress on all sides the need to reach a resolution.

The FM asserted that Egypt would continue to closely coordinate with Russia, which has a central role as a permanent member of the Security Council, in addition to being a country that has its capabilities and influence in the international arena.

Ethiopia is building the dam on the main tributary of the Nile, to generate electricity. But Egypt and Sudan are concerned about its impact on their water supplies.

Shoukry asserted that Egypt has been trying to reach an agreement for a decade now, and showed great flexibility in this regard, putting into consideration the Sudanese and Ethiopian interests in a bid to equally serve the interests of all sides without undermining the water quotas of downstream nations.

Water rights of downstream nations are an “existential issue,” noted the top official, indicating that the matter cannot be handled through negotiations while one of the parties is taking “unilateral measures” which undermine negotiations.

Shoukry reiterated that the unilateral acts taken by the Ethiopian side and its intransigence have thwarted the negotiations on the GERD for a decade, including the AU-sponsored talks.

He called on Russia to play a greater role in the issue, saying: “We count on the relations that bind Russia to the three countries and their ability, with their influence and prestigious international status.”

Last year, the AU failed to reach a consensual solution.

Egypt and Sudan rejected an Ethiopian proposal to share data on the operations of its dam on the Blue Nile after negotiations between the three countries in Kinshasa this week ended without progress.

“Ethiopia invites Sudan and Egypt to nominate dam operators for data exchange before the filling of GERD in upcoming rainy seasons,” the Ethiopian foreign ministry said.

Cairo and Khartoum maintained that they are seeking a legally binding agreement over the operations of the dam and will not accept reaching understandings that provide political and technical cover to the Ethiopian endeavors to impose a fait accompli on the two downstream countries.

Can Israel Get Away With Murder Again?