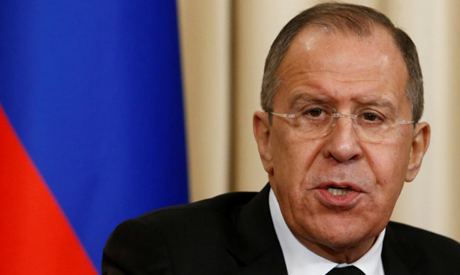 File photo: Russia’s Foreign Minister Sergei Lavrov REUTERS
Wednesday 8 Jul 2020
Russian Foreign Minister Sergei Lavrov said that his country has offered to help resolve outstanding points of dispute in the Grand Ethiopian Renaissance Dam (GERD) talks between Egypt, Sudan, and Ethiopia , Russian News Agency TASS reported on Wednesday.
The Russian FM said that his country is offering its “technical assistance,” without giving further detail.
Lavrov made the announcement following a videoconference held on Wednesday with his counterparts from the African Union’s troika countries, which comprises the outgoing, current and incoming AU chairs: Egypt, South Africa, and the Democratic Republic of the Congo.
During the open session the UN Security Council held last week on the GERD, Russia’s permanent delegate to the international body Vasily Nebenzya urged Egypt, Sudan, and Ethiopia to reach consensus that is in line with international law.
Nebenzya emphasised the importance of resolving the GERD dispute, and said that his country supports all efforts to reach a deal that is satisfying to all parties.
Nebenzya also stressed the importance of adhering to the declaration of principles signed by the three countries’ leaders in 2015.
On the sidelines of the Sochi summit in October, Russia’s President Vladimir Putin had expressed his country’s readiness to mediate between Egypt and Ethiopia on the dam issue given its excellent relationship with Cairo and Addis Ababa.
The previous Russian offer had come a few days after the three African countries accepted an invitation from the US to host the GERD negotiations. The US initiative later stalled after Ethiopia pulled out of its last round, which was planned to result in a final accord.
Egypt, Sudan and Ethiopia have been engaged in a decade-long dispute over the hydropower project Ethiopia is building on the Blue Nile.
Egypt, which is almost entirely reliant on the Nile for agriculture and drinking water, fears the filling of the dam’s reservoir will significantly affect its share of Nile water, while Ethiopia says the project is key to its development efforts.
The three countries have recently resumed talks under the aegis of the African Union, after the recent breakdown of US-mediated talks.
Prior to the latest resumption of talks, Egypt had appealed to the UN Security Council to intervene to resolve the dam’s stalemate to preserve international peace and stability.
The Security Council urged the three countries to refrain from taking any unilateral action and to conduct talks on the basis of mutual understanding.
Cairo, Addis Ababa and Khartoum are scheduled to hold on Wednesday meetings with observers who are participating in the ongoing AU-brokered talks.
Observers representing the EU, the US, the AU Commission, South Africa and the AU’s legal and technical experts are attending the talks.
The AU-brokered talks, which set off last Friday, are due to end on Friday or Saturday, according to Egypt’s irrigation ministry spokesman Mohamed El-Sebaei.
Egypt’s irrigation ministry said on Tuesday, the fifth day of the talks, that legal and technical differences still persist between the three countries despite the flexibility displayed by Egypt.
Via Al-Ahram online
previous post