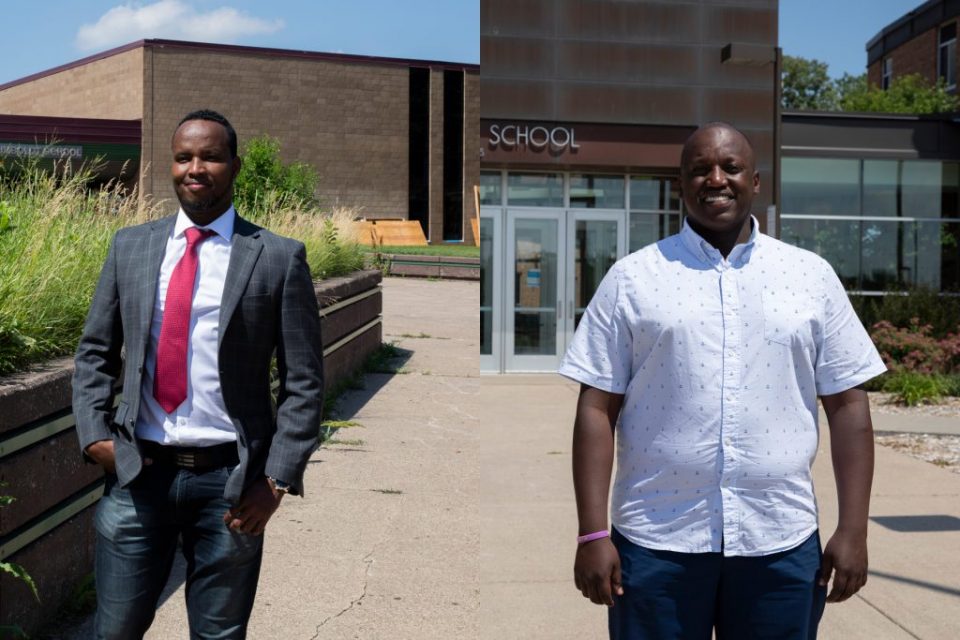 Abdirizak Abdi’s parents never received a formal education growing up in Somalia. Schooling wasn’t available to everyone, and they couldn’t afford it. Even so, his father was an educator, teaching Islamic studies to children learning the Quran and the Arabic alphabet.

“My mother didn’t have the opportunity to be able to go to school,” Abdirizak said. “I remember her words: ‘If you want to reach the moon, you have to get an education.’”

Having succeeded at school, Abdirizak never actually left it. Last week, he began his position as principal of Humboldt High School, in St. Paul. Local education rosters suggest he represents  one of the first two public school principals of Somali descent in Minnesota—and among the first in the country.*

In nearby Bloomington, Akram Osman may have tied him for this historic education first.

On July 1—Somali Independence Day—when Abdirizak started in his new position, Akram, 28, became the new principal of Kennedy High School. It’s a milestone in representational leadership for Minnesota’s increasingly diverse student population and an educator workforce that has often lagged behind.

The Minnesota Department of Education does not collect demographic data about school administrators from specific countries. But an exhaustive Sahan Journal search—combing through school records, and talking to state officials and networks of educators—suggests that Abdirizak and Akram stand as Minnesota’s first Somali principals. Put another way, if another Somali public school principal came first, no one else in the state seems to have heard about it.

“It felt rewarding every time I left work”

He grew up mostly in Kenya, after his family fled civil war in Somalia. He moved to the United States only after he turned 19. Abdirizak, who goes by Abdi, lived briefly in San Diego and Minneapolis before moving to St. Cloud.

There, he enrolled in St. Cloud State University. His grade point average put him in the top 5 percent of his class, and he thought he’d pursue a master’s in business administration.

However, while he was studying management in college, he worked as a cultural liaison in the St. Cloud public schools, helping Somali families navigate the school system. He was considering offers from business schools when his parents and mentors told him he wouldn’t be happy in the corporate world. He belonged in education.

“I was that person that looked at kids as who they are—as human—and believe that every kid had the potential to be successful in the system,” Abdi said. “It felt rewarding every time I left work.”

His older brother, a businessman, supported him through graduate school as Abdi pursued his new goal of becoming an “extraordinary education leader.” In the St. Cloud schools, Abdi worked in multiple roles across elementary and high schools: as a behavior interventionist, in a summer STEM program, in the equity office, and in curriculum development. He eventually became an assistant principal at Apollo High School.

He’s found it rewarding to help students find their strengths. He remembers one student who kept getting sent to the behavior-support room. Abdi suggested focusing on that student’s gifts and talents instead of behavioral concerns. Weeks later, that student became student of the month.

Another student expressed her ambition to become the school’s first Muslim homecoming queen, but her mother objected. Abdi called the parent and changed her mind. The student, Halima Aden, went on to become a trailblazing hijab-wearing model and UNICEF ambassador.

“I had to remind kids you can be whoever you want to become,” he said. “So seeing them out there and who they’ve become, no matter what kind of background they have, really is rewarding to me.”

“I never gave up”

Akram arrived in Mankato from Somalia in fourth grade, taking English-language learning courses. By junior high, he’d grown confident in his English. In high school, he became student council president and captain of the soccer team. Still, he says, “it wasn’t easy to be a student of color in a predominantly white school.”

During his senior year, a new principal at Mankato East High School met with student-council leaders. Over lunch at a local mall, he listened to their priorities and asked about their perspectives.

As that principal got to know Akram’s strengths, he urged him to become a teacher. But Akram wasn’t interested. Most of the teachers and students he knew were white, and he didn’t see himself in the field.

“I wanted nothing to do with education,” he said.

Akram studied exercise science at Minnesota State University, Mankato in hopes of becoming a physical therapist. While in college, he took a job as a cultural liaison to the Mankato Area Public Schools, and also coached the girls’ soccer team.

He found that it made an immense difference to immigrant and refugee families to be able to communicate with someone who spoke their language and could help them navigate the school system.

At the same time, the former high school soccer captain helped the predominantly white soccer players understand their strengths on the field. He saw that it was important for these white students and their families to experience the positive influence of a young Black Somali American man in their lives, too.

He remembered, then, how his principal had seen something in him he hadn’t seen. He wanted to play that role in the lives of other young people.

Akram began his teaching career as a special education teacher in Mankato, providing reading, math, and social-skills support to students with a variety of special needs. He still thinks frequently about one student who needed extra guidance and clear expectations from an adult.

After Akram left the school—ultimately serving as dean of students and associate principal in Burnsville and Eden Prairie schools—the student sent the educator a note, thanking him for the role he played in his life. Akram still keeps that note close at hand.

“He knew he challenged me every day,” Akram said. “I never gave up.”

It’s this leadership style that Akram hopes to bring to students at Kennedy High School. He wants to create a school environment where students’ passions and strengths will play a more prominent part in the school—especially for students who haven’t always felt heard.

“I can’t wait to hear their perspectives and their hopes and dreams, their goals and their thoughts about Kennedy High School,” he said.

“I never had a Somali teacher, ever”

Somali educators have experienced that dynamic first as students, then as professionals. “I never had a Somali teacher ever,” said Hibaq Mohamed, an educator who graduated from the Minneapolis Public Schools. “I think that left a mark on me.”

Over the past decade, several programs have helped fuel an increase in East African educators in Minnesota. One of those programs is Augsburg University’s East African Student to Teacher (EAST) program.

In the early 2010s, community activists and faith leaders in Minneapolis’s largely Somali Cedar–Riverside neighborhood began organizing for more teachers who looked like their children, said Audrey Lensmire, director of the program. With the help of state Rep. Jim Davnie (D-Minneapolis), the legislature funded an appropriation to provide full scholarships to people of East African descent who want to become teachers.

“In a relatively short time, we’ve been able to multiply the number of educators of East African descent in the state of Minnesota from a handful to a bit of a larger handful,” Lensmire said.

Hibaq Mohamed, who will begin a position as an assistant principal in St. Paul’s Highland Park Middle School this fall, said she hoped the increase in Somali educational leadership would help students see themselves in leadership roles.

“It’s so important that our kids see that this world is their oyster, even if it was not designed for them to succeed,” she said. “And that only happens if there are examples at all levels, in all sectors, in all fields.”

Abdi and Akram are taking up leadership at a tumultuous time for schools. The coronavirus pandemic has upended the usually reliable rhythms of a school year. Districts throughout the state are awaiting guidance from the Minnesota Department of Education, expected in late July, on whether classes can resume in person this fall. And conversations about making schools more equitable have taken on heightened urgency in the wake of the police killing of George Floyd in Minneapolis.

Akram says he’s looking forward to supporting students, families and staff after the traumatic interruption of the coronavirus pandemic. He’s eager to get to work building a more equitable school with student input.

Abdi started the process of listening to Humboldt students, staff, and community members even before his contract started. “It’s a great community, it has a lot of strengths,” he said. “I’m looking forward to creating an inclusive and a clear vision for our school that’s contributed by all the community, the staff and the students.”

Apollo High School in St. Cloud, where Abdi first became an assistant principal, takes its name from the space program in the 1960s and 1970s. A NASA capsule sits on display outside the school.

Abdi remembers walking by the space capsule last year around the 50th anniversary of men first walking on the moon, and thinking about his own place in history. St. Cloud has a reputation for racial divisions. But it’s also a place where Abdi could grow and thrive as an educational leader.

“Despite the divisions and uncertainty and crisis we see,” he said, “there’s hope and prosperity ahead.”