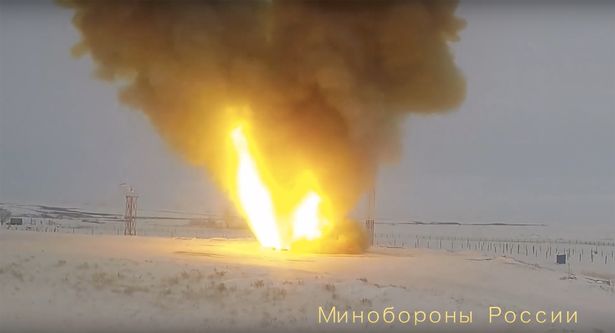 Vladimir Putin’s state has confirmed the launch of the Avangard system that will be deployed for the first time this month at the Dombarovksaya Rocket Division, it was announced

War-crazed Russia has threatened to unleash a new hypersonic nuclear missile that strikes enemies “like a meteorite” anywhere in the world in less than 30 minutes.

The Avangard missile system will be deployed for the first time this month at the Dombarovksaya Rocket Division.

Using a hypersonic glide vehicle, it reportedly travels up to 20 times the speed of sound and can rise outside the Earth’s atmosphere before hitting anywhere in the world in under half-an-hour.

The commander of Russian Strategic Missile Forces (RVSN) Colonel-General Sergey Karakaev told Red Star newspaper today: “The deployment of the first rocket regiment with the Avangard missile system at the Dombarovksaya Rocket Division is planned by the end of 2019.”

He added it was part of a bid by the state, run by President Vladimir Putin, to develop “new types of military equipment for modern and future strategic missiles”.

Putin has previously claimed the nuclear-capable weapon strikes “like a meteorite” and is unstoppable by any defence system.

The first regiment equipped with the Avangard will “assume combat duty at the Dombarovskaya Rocket Division in Orenburg region” before December 31, reported TASS news agency.

The hypersonic system is one of half a dozen new strategic weapons heralded by Putin in March 2018, and Karakaev’s statement suggests Russia is meeting its target for deployment before the end of this year.

Karakaev – who first entered the Kremlin 20 years ago this month – described it as “invincible”.

He has said: “The Avangard is invulnerable to intercept by any existing and prospective missile defence means of the potential adversary.”

The deployment comes a year after Putin said: “On my instructions, the Ministry of Defence prepared and conducted a final test of this system. This has just been completed with absolute success.”

He called it a “new type of strategic weapon”.

Late last month the Russians showed the Avangard to US inspectors under the provisions of the New START treaty.

Boris ‘The Bozo’ Johnson is toast