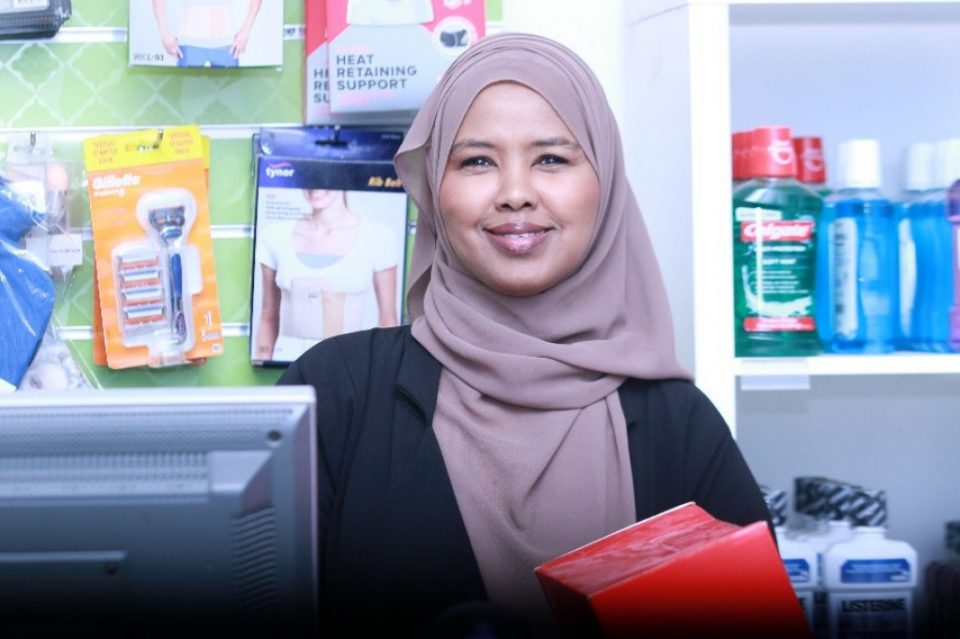 ElmiMedic in Hargeisa, Somaliland was founded by Rhoda Elmi, a member of the Somali diaspora in Sweden. ElmiMedic’s core business is focused on pharmaceuticals both prescribed and over the counter medicines, and health-related products. They have since then expanded their product range to include hygiene, beauty products and more.

Rhoda, founder of the ElmiMedics, at her main business outlet in Hargeisa.

Sometimes in 1982, Rhoda went to Sweden to reunite with her father who was living in Sweden. Conscious of the healthcare shortage in her home country, Rhoda pursued a Bachelor of Pharmaceutical Science in Gothenburg University where she successfully graduated. She then worked as a Manager in one of the pharmaceutical parastatals in Gothenburg where she gained a quite experience on pharmaceutical products.

Early 2013, Rhoda, a mother-of-one, returned to Hargeisa to visit her family along with her son. Its during her visit that Rhoda experienced firsthand problems faced by people living in Somalia regarding quality of medicine available in the country. Her son had stomach complications, so she took him to a health facility in Hargeisa. To her surprise, her son was prescribed with two medication – one of the medication was manufactured in Pakistan and have been banned by the European union. The second medicine was intended to cleanse the kidney and not the stomach. She felt a deep urge to do something about this problem.

In Africa and particularly in Somalia, its widely believed that people with low-income or even in hard-to-reach areas have health issues because they cannot access medical services on time. However Rhoda believes that there’s more than meet the eye in country where there’s no regulation and legislations on the pharmaceutical goods coming into the country. This has led to a market flooded with poor quality and counterfeit medicines, putting lives of people at risk.

“I always had the dream of giving back to my community.  I started by looking at the types and quality of medicines in our shelves. They were cheap but poor quality and by far, below the international standard. I felt something urgent ought to be done”

“I always had the dream of giving back to my community and I thought I could do this through my education. I started by looking at the types and quality of medicines in our shelves. They were cheap but poor quality and by far, below the international standard. Some of the products are no longer acceptable in European countries but our people here continue to be prescribed over. Such products have since aggravated conditions of people seeking medications. I felt something urgent ought to be done” says Rhoda.

Rhoda checks over her products in Hargeisa on Novermber 6, 2019.

Armed with only her vision, a strong determination and just about few thousands of dollars, she started ElmiMedic’s in Hargeisa, Somaliland’s biggest city in 2013. In very short period, ElmiMedic’s got a footing in the market, thanks to the quality of the products she shipped from Sweden. In 2018, Rhoda applied the Somali Swedish Business Programme (SSBP) which luckily considered her business and first injected about $20,000 to expand her business.

The funding from the SSBP programme enabled Rhoda to expand her business, thereby opening a branch in Jigjiga yar – a suburbs of Hargeisa which has large Somali diaspora community. Today, Rhoda’s business employed 9 full-time workers, 5 female and 4 male workers who support her in running her business. She supplies pharmaceutical good to neighboring towns of Borama, Burao and even to Somalia’s capital city Mogadishu. Tapping into the growing market for pharmaceutical products, Rhoda plans over the next few years, to spread her business across the country and in Jigjiga, a city in the Somali region of Ethiopia.

“In an environment without quality control, reputation is of great essence to us. Over the past few year, my business have attracted thousands of customers and this is because of the quality of the product we brought in to the country. I want to thank Forum Syd and the donor for helping me realise my dreams. I am so grateful for the support and Its my hope that you continue supporting people with business ideas to flourish” says Rhoda.

As a woman in a male dominated society, Rhoda’s success isn’t without hurdles which she faced heads on. The challenges faced by women who have embraced entrepreneurship are vast and often very different than those experienced by their male counterparts. There are few women-owned businesses in the country denying the right support network to lean for mentorship and support. There’s little microfinancing opportunity for female as most banks have stringent microfinancing requirement that favor men over women. Rhoda’s defied all social expectations and rose to become a hope to thousands of women and girls who look up to her as business role model.