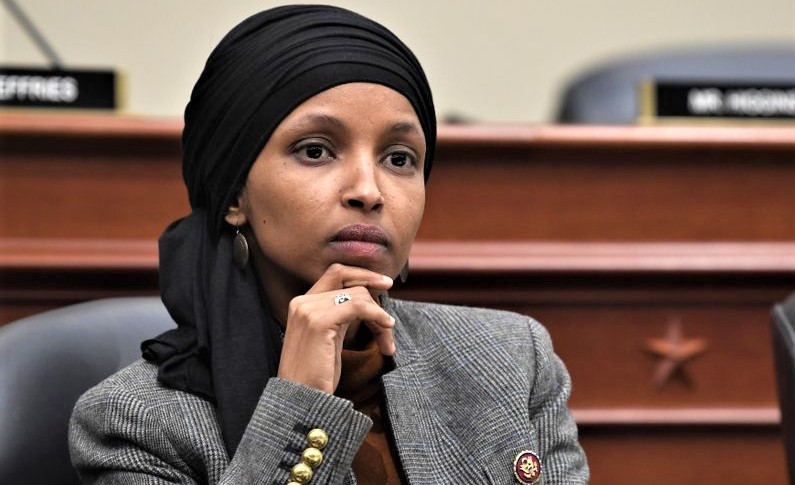 Nothing unites white America more than a Muslim woman speaking out against US and Israeli war crimes.

crimes committed by both the United States and its enemies, she broke an unspoken rule in mainstream political discourse: no Muslim shall speak about Western government crimes that occur in Muslim majority countries.

Omar asked Secretary of State Antony Blinken a question on June 7 about why the Biden administration still opposed an ICC investigation into war crimes perpetrated by US forces, Afghan national government, and the Taliban in Afghanistan, along with Israel and Hamas in the Palestinian Territories. The next day, she tweeted:

“We must have the same level of accountability and justice for all victims of crimes against humanity. We have seen unthinkable atrocities committed by the US, Hamas, Israel, Afghanistan, and the Taliban. I asked @SecBlinken where people are supposed to go for justice.”

A firestorm of criticism and hatred towards Omar erupted in Washington DC and on cable television networks, with conservative pundits on Fox News accusing her of equating the US and Israel with the Taliban. Others accused her of “hating America” and sympathizing with the terrorists. Their words echoed sentiments from former President Donald Trump, who falsely claimed Omar professed a “love” for al-Qaeda.

“Every time I speak out on human rights, I am inundated with death threats,” Omar tweeted on June 9. “Here is one we just got: ‘Muslims are terrorists. And she is a raghead n*****. And every anti-American communist piece of s*** that works for her. I hope you get what’s f***ing coming for you.’”

Even members and leaders within Omar’s own political party smeared her with charges of anti-Semitism by allegedly equating Israel to Hamas and the Taliban—despite the fact she clearly did not, in reiterating her support for an ICC investigation into war crimes by all parties and in all theaters of armed conflict.

It would appear nothing unites Republicans and Democrats more than a mutual hatred and fear of forthrightly outspoken Muslim women.

It would appear nothing unites Republicans and Democrats more than a mutual hatred and fear of forthrightly outspoken Muslim women.

It matters not that Trump has said the same things and gone even further than Omar in criticizing the conduct and expertise of the US military. In 2017, for instance, when asked whether he believed Russian President Vladimir Putin to be guilty of war crimes and crimes against humanity, Trump replied, “Sure, but there are a lot of killers. You think our country’s so innocent?”

Trump has also accused the US military of “doing nothing but fight wars, so that all of those wonderful companies that make the bombs and make the planes and make everything else stay happy,” and denigrated US servicemen killed in the Second World War as “suckers and losers.”

But as Rashida Tlaib (D-MI), a Democratic Muslim Congresswoman notes, “Freedom of speech doesn’t exist for Muslim women in Congress. . . . House Democratic leadership should be ashamed for its relentless, exclusive tone policing of Congresswomen of color.”

There’s no arguing against the fact Muslims have been denied freedom of speech within the realm of the “War on Terror,” a discourse that has made Muslims the referent object or “evil doer,” one juxtaposed against a white, moral, and civilized “good guy” – that being the US and its non-Muslim allies.

“The war on terror discourse reinforces the basic premise of Orientalism, the absolute difference between Islam and the West,” observes Dr. Uzma Jamil, a postdoctoral Research Fellow at the International Center for Muslim and non-Muslim Understanding at the University of South Australia. “Islam and Muslims are associated with an ‘inherent,’ uncivilized propensity for violence, which is connected to the Orient as something to be both feared and controlled for this reason.”

For Muslims, speaking out against US, NATO, or Israeli war crimes invites accusation of being aligned to terrorism.

For Muslims, speaking out against US, NATO, or Israeli war crimes invites accusation and suspicion of being aligned or sympathetic to terrorism.

This has resulted in not only a shutting down of Muslim voices in the public square, particularly in relation to Western-led wars, but also has underpinned counter-violent-extremism (CVE) programs in the US, United Kingdom, and Europe. Muslim students in these countries are routinely referred to authorities as potential “radicalized” suspects for expressing support for Palestine or condemning Israeli, US, UK, or NATO military actions in the Middle East or Afghanistan.

In the UK, for instance, a schoolteacher or college professor has a mandated obligation to report students they believe are at risk of violent extremism or radicalization under the country’s controversial CVE program, PREVENT UK. This has resulted in Muslims being disproportionately targeted due to the persistent association between Islam and terrorism.

Muslim students have been flagged for wearing pro-Palestine t-shirts, flying “free-Palestine” flags, and posting criticisms of British and American political leaders on social media. Earlier this year, a four-year-old Muslim boy was referred to PREVENT UK for talking about the popular Fortnite video game at his after-school club.

France has essentially framed anything associated with Islamic culture to be a threat to national security.

In France, Emmanuel Macron’s government has essentially framed anything associated with Islamic culture to be a threat to national security, in banning Islamic dress and shutting down Islamic schools and charities. The drastic and discriminatory measures have drawn parallels to China’s crackdown against Uighur Muslims in Xinjiang Autonomous Zone, only without the concentration camps.

It’s for this reason the space for France’s Muslim population to express criticism of the country’s military and diplomatic exploits in the Middle East has become ever smaller.

The difference in the way she has been treated by members of both major political parties could not be starker than the manner in which Republicans have condoned bona fide extremists who engage in anti-Semitic, Islamophobic, and racist rhetoric and conspiracy theories. This includes Marjorie Taylor Greene (R-GA), who claimed the existence of “Jewish space lasers” and equated face mask mandates with the Holocaust.

The point is this: racism is as American as apple pie, but Islam is conflated with everything “un-American,” which means that whenever a Muslim like Omar speaks out, many will ask, “Why does she hate America?”