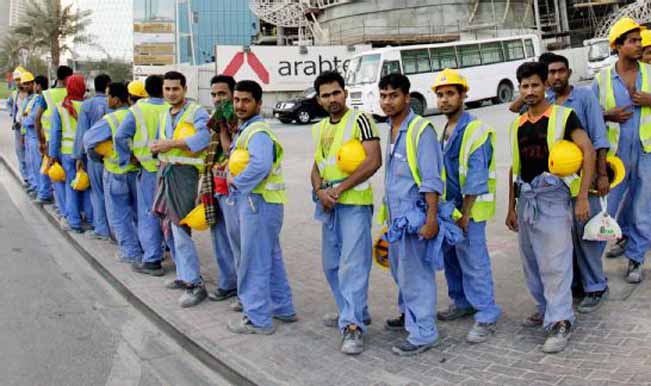 Qatar has one of the highest COVID-19 infection rates per head of population in the world. (AFP/File)

LONDON: Migrant workers in Qatar are having to beg for food as the country struggles to cope with one of the world’s highest rates of coronavirus infections.

Despite Qatar’s vast wealth, desperate low-wage workers have been abandoned by employers and are unable to leave the country, according to an investigation by The Guardian.

Some of the workers have had to plead with their employers and charities for food.

“I don’t have much food left. Just some rice and lentils,” Rafiq, a cleaner from Bangladesh, said. “It will last only a few days. What happens when this food finishes?”

Rafiq, who lost his job in March, was one of more than 20 migrant workers interviewed by The Guardian about their plight.

Qatar has recorded just 12 deaths from COVID-19, but with more than 18,000 cases among its population of 2.8 million, it has one of the highest infection rates in the world. The vast majority of cases are migrant laborers.

Human rights groups have repeatedly raised concerns about the spread of the virus through labour camps, particularly in the Industrial Area on the outskirts of Doha.

In March, Human Rights Watch, Amnesty International and several other NGOs and trade unions sent a joint letter to Qatar’s government calling for workers to be protected against the coronavirus.

“Qatari authorities should, among other recommendations, ensure that all migrant workers, including undocumented workers, quarantined or otherwise, have access to testing and get appropriate medical treatment,” the letter said.

Last month, Arab News reported on the human tragedy unfolding as COVID-19 struck down thousands of workers living in labor camps in the Industrial Area.

The sprawling, overcrowded region is home to much of the state’s low-income expatriate workforce, with men often crammed 10 to a room, and sharing kitchens and toilets.

Qatar enforced a strict lockdown of the area on March 11 as cases started to spiral. Those restrictions have started to be eased in recent days as the government says it will expand testing.

The situation for workers escalated last month when companies that had stopped operating were allowed to put workers on unpaid leave or terminate their contracts completely, The Guardian reported. The companies were told to continue to provide food and accommodation, but this appears not to be happening.