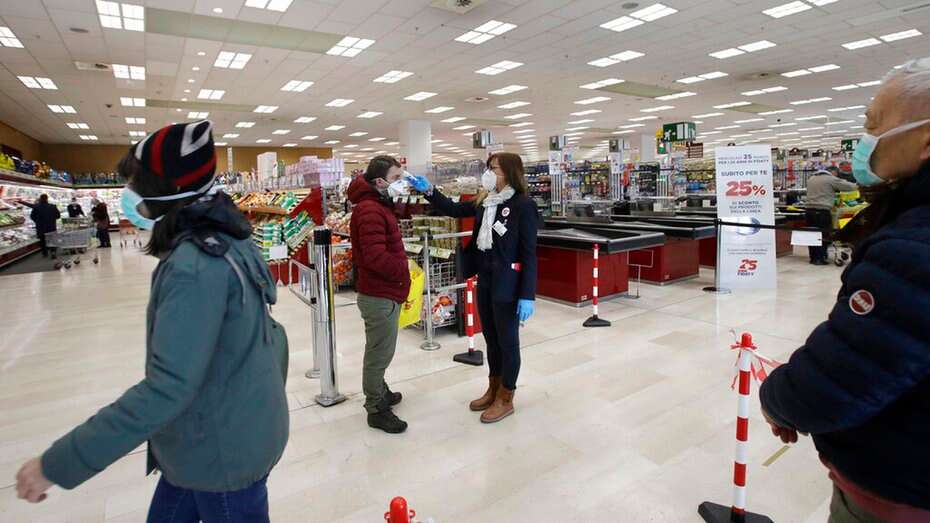 The virus setback has eroded the economy

By AFP and Reuters in Palermo

Police with batons and guns have moved in to protect supermarkets on the Italian island of Sicily after reports of looting by locals who could no longer afford food.

The death toll from the coronavirus outbreak in Italy climbed by 756 to 10,779, the Civil Protection Agency said on Sunday, the second successive fall in the daily rate.

The virus setback has eroded the economy, which had been the third largest in the European Union before the new illness reached Italian shores from China last month.

A lockdown designed to curb the contagion has shut almost everything across Italy since March 12, depriving millions of steady incomes. The building sense of desperation reportedly boiled over on Thursday in Sicily, long one of Italy’s least developed regions.

According to La Repubblica daily, a group of locals ran out of one of Palermo’s supermarkets without paying. “We have no money to pay, we have to eat,” someone reportedly shouted at the cashiers.

In other Sicilian towns, small shop-owners that are still allowed to stay open have been pressured by the locals to give them free food, Il Corriere della Sera said. The paper wrote of a ticking “social time bomb” in the region, which is home to around five million people, and which has recorded 57 deaths from Covid-19.

“I am afraid that concerns shared by much of the population — about health, income, the future — will turn into anger and hatred if this crisis continues,” Giuseppe Provenzano, Italy’s minister overseeing southern regions, told La Repubblica.

An AFP reporter saw four armed policemen guarding one of Palermo’s supermarket entrances on a rainy Saturday afternoon. They stood silently, hands behind their backs or tucked into the straps of their bulletproof vests, their faces partially hidden by green masks. They did not speak or interact with the shoppers.

In Rome, Italian Prime Minister Giuseppe Conte appears aware of the building sense of anxiety, stress and fear gripping the nation. Making one of his increasingly regular evening television appeals to the nation on Saturday evening, Conte promised to send food vouchers to those who cannot afford groceries.

“We know that many suffer but the state is there,” Conte said. His government is earmarking 400 million euros for the emergency food relief programme.

Spain prepared to enter its third week under near-total lockdown on Sunday, as the government approved a strengthening of measures to curb the spread of the coronavirus and the death toll rose by 838 cases overnight to 6,528.

Second only to Italy in fatalities, Spain also saw infections rise to 78,797 from 72,248 the day before.

Prime Minister Pedro Sanchez, in a televised address to the nation on Saturday night, announced that all non-essential workers must stay at home for two weeks, the latest government measure in the fight against the virus.

He said workers would receive their salaries but would have to make up lost hours at a later date. The measure would last from March 30 to April 9.