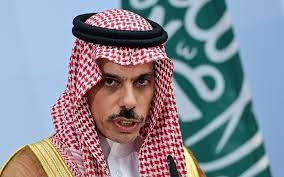 ALBAWABA – Is there going to be an “Arab NATO”? Many people are taking about the possibility of establishing such an organization – a loose military alliance that includes Israel. However, the idea is being flagged down, not least of all by the Saudis:

Many are talking about it now in the light of the Jeddah GCC summit which has just concluded and had Gulf states plus Jordan, Egypt and Iraq that included US president Joe Biden and his team who especially came to the region for a mixed bag of reasons:

The idea is trending because it is actually quite innovative as a phrase and mainly because of its implications designed to include non-Arab states. This is how one sees it:

The Saudi Foreign Minister Prince Faisal bin Farhan Al-Saud couldn’t have been clearer and forceful. The Saudis is clearly not playing the ball set out by the USA and Israel which want to Isolate Iran:

The Saudi FM said that no type of military or technical cooperation with Israel was raised or discussed and that there is no such thing as an “Arab NATO,” reiterating that there was no discussion of a “defensive alliance” with Israel according to Al Ahram.

Here’s how one put it:

But the idea of Israel entering a joint regional security pact continues to be worrisome despite the denials. Clearly it will not happen but this doesn’t mean people will stop talking about. Actually, it could will happen if Israel agrees to a two-state solution with the Palestinians but this doesn’t seem to be at all likely now and or in the distant future.

One even put it this way. Arab leaders had clearly said no to Israel, or in diplomatic parlance they didn’t discuss the issue but there is still plenty of things that were not addressed and needed to be discussed:

The Saudi FM however, extended an open hand to Iran, Israel’s arch-enemy. How can this be so? It was a bit of a surprise but the Saudis had been talking to Iranian delegates for well over a year now and it was unlikely they would turn against them because of US and Israeli fears.

Biden may have clearly failed in this respect, since some say a “NATO-like” alliance was his idea and let’s say it frankly, it was a way to bring in Israel into the Arab world or a new Middle East through the back door. According to this blogger:

One even headlined it this way as if to make it crystal clear:

Its no doubt that comments will control to roll off the printing presses and platforms as a sort of favourable past-time but an Arab-NATO will Israel in the Middle is a long way off.