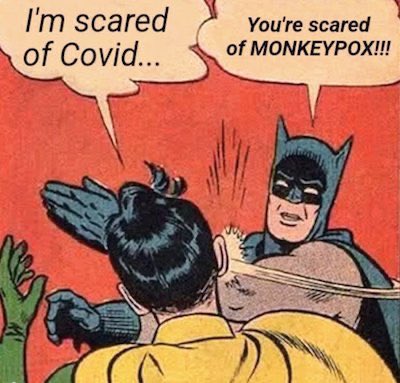 May 28, 2022
Mike Whitney
“I can’t believe it’s monkey-pox season already and I haven’t even taken my Ukrainian decorations down.” Robin Monotti

Bill Gates prediction that the world would face an unexpected smallpox outbreak is miraculously unfolding. Should we be surprised?

I know I’m not. Here’s the money-quote that was delivered by Gates 6 months before the first case was recorded.

“It’ll take probably about a billion a year for a pandemic Task Force at the WHO level, which is doing the surveillance and actually doing what I call ‘germ games’ where you practice… You say, OK, what if a bioterrorist brought smallpox to 10 airports? You know, how would the world respond to that?” Bill Gates, Sky News, November 6, 2021

One can only marvel at Gates’ extraordinary powers of perception. He’s like some kind of Software Soothsayer able to divine the future from the entrails of animals. Is that it, or does he have a crystal ball tucked-away somewhere in the bowels of his Lake Washington mansion? Whatever it is, it’s trully astonishing. Here’s more from the World Socialist Web Site:

Much remains unknown about what is causing the outbreak, which is the most geographically dispersed and rapidly spreading monkeypox outbreak since the virus was first discovered in 1958. In the coming days and weeks, more data and scientific understanding will emerge, but already there is profound concern within the scientific community and among the public, which has found wide expression on social media.” (“Over 100 monkeypox infections detected in 10 countries as unprecedented outbreak spreads globally“, World Socialist Web Site)

Repeat: The most “rapidly spreading monkeypox outbreak since the virus was first discovered in 1958.”

I wonder if that “rapidly spreading” part has something to do with the way that researchers have been tweaking the gain-of-function of these unique pathogens in order to make them more contagious and more lethal? Is that what’s going on?

And, is it fair to ask whether monkey-pox might be another lab-generated virus that was concocted in the 300-or-so Pentagon-funded secret labs sprinkled around the world that are presently conducting a massive war on humanity to further the ambitions of billionaire elites who are committed to reducing the global population while imposing strict, police state surveillance on every sentient being on planet earth?

We probably won’t get an answer to that one either.

In the interest of fairness, though, we should mention that “reputable” media outlets, like Newsweek magazine, have refuted the claim that Gates made the prediction that we allude to above. Here’s Newsweek’s explanation:

“While Gates has talked about the possibility of bioterrorist smallpox attacks in the past, his comments have been drawn slightly out of context and don’t mention monkeypox.” (Fact Check: Did Bill Gates Predict The Monkeypox Outbreak? Newsweek)

“Slightly out of context?” You mean, Gates did NOT draw attention to a particular infectious disease (smallpox) that magically reemerged from extinction just months later? What “context” is the author talking about? We’d like to know.

Strictly speaking, it doesn’t matter what Newsweek says or doesn’t say, after all, Gates has become the embodiment of everything that’s wrong with today’s Public Health Gestapo, which is why he’s become a magnet for criticism. And, whether he’s been treated fairly or not, a sizable number of people believe quite strongly, that Gates is the mastermind behind a plan to use lab-generated infectious diseases to subjugate the global population in order to establish a tyrannical New Order controlled by voracious elites like himself. And the WHO’s new sovereignty-eviscerating treaty further underscores this point, in fact, it seems to suggest that Gates and his fellow travelers believe their lifelong ambition to rule the world is now within their grasp. Check it out: In researching this article, I stumbled across a number of tidbits that readers might find interesting. For example, I discovered that there had been a tabletop exercise simulating a global pandemic involving an unusual strain of #monkeypox” that took place in March 2021. It’s astonishing how many of these ‘preparatory drills’ seem to take place just prior to some particularly horrific event. Can we dismiss them all as mere coincidences? Check out this blurb from the Brownstone Institute:

“… media outlets around the world are on red alert over the world’s first-ever global outbreak of Monkeypox in mid-May 2022—just one year after an international biosecurity conference in Munich held a simulation of a “global pandemic involving an unusual strain of Monkeypox” beginning in mid-May 2022.

Monkeypox was first identified in 1958, but there’s never been a global Monkeypox outbreak outside of Africa until now—in the exact week of the exact month predicted by the biosecurity folks in their pandemic simulation. Take these guys to Vegas!

And here’s a minute and a half video that helps to explain the excerpt above. (Video) You may notice that the anchor reporting the (simulated) outbreak says, “Scientists have decided that this monkeypox virus was engineered.”

Uh huh. And, further along, one of the analysts offers these prescient words of advice: “We’re seeing far fewer cases where governments’ took early and decisive action”

What do you think that means? Could it mean that we’d better prepare ourselves for another round of experimental clot shots? Is that what it means?

So,here’s your Pandemic Quiz for the Day: What do you think the chances are that an oddball affliction, like Monkeypox, could spontaneously break out in 10 different locations around the world (where it had never appeared before) at the exact same time?

How about “zero” chance? Is that too high?

I’m going to go out-on-a-limb here and say there is zero chance that this new disease occurred “naturally”. The only rational assumption one can make, is that monkey-pox, like Covid, is a lab-generated pathogen spread by covert agents that are prosecuting a bio-war on the global population. But we’ll have to consult Dr Fauci on the matter and see if he agrees. Here’s more from the WSWS:

In preliminary posts, scientists speculate that the virus, which is endemic in parts of Africa, could have evolved to become more contagious and better suited to human-to-human transmission. In addition, nearly all people under 42 years old have not received a smallpox vaccine (which is 85 percent effective at preventing monkeypox infection) since smallpox was eradicated in 1980. As a result, they have no immunity, and younger adults can be infected as easily as children.”(WSWS)

This simply confirms that another mass vaccination campaign is on the way. Here’s more from the same article:

“The emergence of multiple cases across different countries is deeply problematic….“Given that we have seen now confirmed cases out of Portugal, suspected cases out of Spain, we’re seeing this expansion of confirmed and suspect cases globally, we have a sense that no one has their arms around this to know how large and expansive it might be….

In nearly every public statement by epidemiologists, they have all admitted to being bewildered by how entrenched the virus already is in communities, given that it is normally extremely rare. Tom Inglesby, director of the Johns Hopkins Center for Health Security, told STAT News, “this is starting off with much more of a foothold, in a much more distributed way, and we don’t understand how it got into those networks.” (“Over 100 monkeypox infections detected in 10 countries as unprecedented outbreak spreads globally“, World Socialist Web Site)

So, it’s everywhere already? Then, what do we do?

The obvious answer is lock-down, mask up and get vaccinated as soon as possible. Otherwise, most of the world’s population could face an agonizing death… just like Covid, remember?. Of course, some people might conclude that we are being deliberately misled again, and that 2 pandemics in 2 years is a statistical impossibility. But why be reasonable when mass-hysteria is the order of the day? Here’s more:

In other words, don’t be dissuaded by the sky-high rates of heart attacks, strokes, blood clotting or death. Just follow the CDC’s thoughtful recommendations and everything will be just fine. Besides, the government has already purchased 13 million of these new-improved poison-death shots (U.S. Buys 13 Million Doses of Monkeypox Vaccine) so just calm down, take a deep breath and roll up your sleeve. We all know the drill by now.

We do, however, scratch our heads when we read about the suspicious goings-on at the Pentagon’s secret bio-labs that appear to be engaged in all manner of illicit skullduggery including the industrial-scale creation of lethal pathogens that could exterminate billions of people in one fell-swoop. That does keep us up at night. Check out this article in Tass:

“The US researched Ebola and smallpox viruses in Ukraine, says Irina Yarovaya, Co-Chair of the Parliamentary Commission on Investigation of US Biological Laboratories in Ukraine.

“Today, we presented an analysis of which pathogens the US was particularly interested in in Ukraine,” she told reporters Friday. “Aside from the pathogens that are territoriality bound to Ukraine, [the laboratories] researched viruses and pathogens that are endemically very far from Ukraine, such as Ebola and smallpox.”

According to the legislator, the information obtained indicates “aggressive goal-setting that underpins the foundation of these programs, de facto implemented by US Department of Defense on Ukrainian soil.”…

“I would like to underscore that the dialogue that we had with the SVR chief today, combined with the proof obtained by the commission, fully confirms the US-created network of biological intelligence worldwide and the implementation of active military-biological exploitation of the globe, and Ukraine in particular. This essentially poses a serious global threat”….

“But at the same time, [it should] urge the global community to seriously get to the bottom of this secret and dangerous military biological activity, implemented by the US. So that comprehensive measures pertaining to common, equal and indivisible security could be developed. Given the distinction between peaceful and non-peaceful use of bacteriological research and the study of toxins, it must be completely transparent and controlled. And there simply must not be any bacteriological weapons in the world, this is Russia’s principal position.” (“Key Russian lawmaker reveals illicit Ebola, smallpox research at US-run Ukraine biolab”, Tass)

So, what’s going on here? Why does the Pentagon have over 300 bio-labs spread around the world conducting secret gain-of-function research on pathogens that pose a clear threat to all of humanity? And why has the Pentagon partnered with notorious elites whose links to the eugenics, depopulation and climate movements suggest the research may be shaped to a particular strategic agenda that could involve significant casualties?

And what if Monkeypox is not, in fact, a natural occurring virus but merely the next phase of a relentless war on Constitutional government, individual freedom and the basic institutions of modern civilization? Perhaps, we are being prepared for a different civilization altogether, a civilization in which all of our decisions will be made for us by enlightened elders, corporate stakeholders and well-meaning philanthropists. Is that possible?

It’s certainly worth thinking about.

The Danger of Underestimating Russia