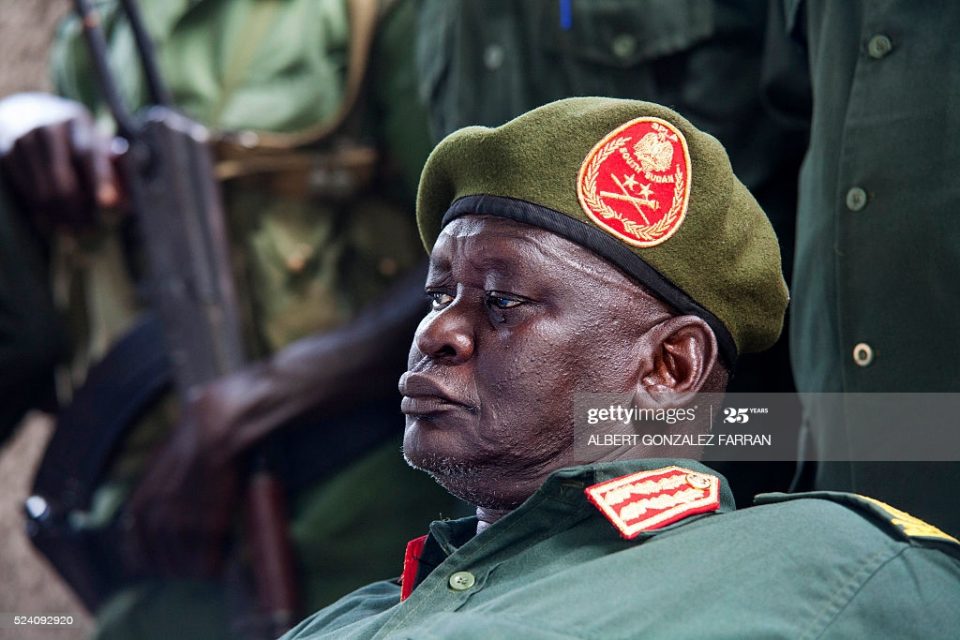 SPLA-IO Chief of Staff, 1st Lieutenant General Simon Gatwech Dual, has in an exclusive with Radio Tamazuj said that his boss, First Vice President Dr. Riek Machar, is a prisoner in Juba and cannot even visit his troops and areas under his control. He also claims the implementation of the peace deal is wanting, behind schedule, and fragile.

Gen. Gatwech Dual has in the past month written twice to the regional body IGAD to allow Dr. Riek Machar to visit SPLA-IO troops in their bases to brief them on the progress of the peace deal.

Radio Tamazuj sounded him out and below are edited excerpts from the conversation:

Q: A couple of weeks ago you wrote requesting that your Chairman, Dr. Riek Machar, be allowed to visit and brief you and your forces about the status of the Revitalized Agreement on the Resolution of the Conflict in the Republic of South Sudan (R-ARCSS). What has happened in this regard?

A: Yes, this is true. I remember I wrote to the Troika, African Union, and IGAD to allow Riek Machar to come visit us in the places where we are currently based. He went to implement the agreements which were signed in Addis Ababa and Khartoum in 2018. Riek Macher left for Juba in February this year to implement the R-ARCSS and has now spent nine months in Juba without success. I say this because our forces have been put in training centers for 13-14 months without being passed out and they have no food supplies. So I requested that he be released so that he can come to visit these places of ours but the government there in Juba does not want. So that is why I wrote to IGAD.

We want Machar to come and give us, his forces, a briefing on whether this is genuine peace or not. Is Dr. Riek Machar in jail or not in jail? I can say authoritatively that Dr. Riek Machar is still in prison because he cannot go and visit his forces, his people, and areas under his control and the government has not yet been fully established. Officials have not been appointed and the army and police have not been passed out.

Q: Has anybody replied to your letter requesting Riek Machar’s visit?

A: I have not received a reply up to now and I even wrote another request because there is a problem. On the 21st of September 2020, our forces were attacked in Moroto training camp, and on the 28th Forua training center was also attacked. On the 29th another training center was attacked. Then on the 4th of this month, a recce squad of ours was attacked. Yesterday at 5 pm our second headquarters base in Jekou was shelled using artillery pieces. Is this peace?

Q: You said you wrote another letter. Was there a response?

A: No. There is no response up to now. This now means I have to defend myself because Dr. Riek Machar is in jail.

Q: Now that you have written twice with no response, what is your next course of action as SPLA-IO Chief of Staff?

A: I will engage in self-defense forthwith.

Q: What does that imply?

A: This means that if we are attacked again like it happened yesterday evening, it means we will fight.

Q: Are you announcing the commencement of war?

A: On the 21st, 28th, 29th of September, and the 4th of this month we have been continuously attacked and nothing has been done. Months after months the salient points in the peace agreement are not being implemented. Dr. Machar went to implement the peace agreement in Juba 9 months ago and there is still no success in implementation. There is nothing so what can I do apart from self-defense.

Q: How are you going to defend yourself and fight when you have people in Juba, including your boss? What does this mean?

Q: So if you are attacked, will you counterattack?

A: I will fight immediately if I am attacked again because I have evidence of the attacks on us. On the21st, 28th, 29th of last month, and on the 4th of this month, I defended myself. All this time we did not react and only defended ourselves. How can there be peace when these attacks continue?

Q: Are you saying the peace agreement has collapsed?

A: Some people have been compromised with little money to scuttle the agreement. Our forces are here without food and medicine and have not been passed out. These issues can negatively affect and fail this peace agreement and this is what the government in Juba desires. This is politics. Even Dr. Riek Machar stays in one place and cannot move about in Juba and is worried about his security. He does not even have his bodyguard and is guarded by Salva Kiir’s guards. How can the person you fought with guard you?

Q: What is your opinion on the suggestion by some people that the unified forces have not been passed out because there are no rifles to arm them?

A: Firearms are available. Salva Kiir has weapons but does not want to arm these forces because he wants them to desert. Salva Kiir said with his mouth that there are no weapons while he is at the same time bought weapons. He recently procured weapons. He even recently bought more than 200 vehicles. And these are vehicles of war, Toyota Landcruiser pick-up trucks.

Q: So what do you think is the intention of the government in Juba regarding the issue of firearms?

A: I see that what we have is not genuine peace. Salva said with his mouth that Riek Machar has no place to pass this time. Dr. Riek momentarily is a prisoner. That is why all these attacks on our positions continue. Riek is in Juba doing nothing.

Q: So now that president Kiir is saying there are no arms for the unified forces, what do you want to tell your forces who are in training centers?

A: If president Kiir is saying there are no arms this means our forces have to go back to their respective SPLA-IO bases where they came from. There is no problem!

Q: Is this a directive or your reply to president Kiir?

A: I am still for peace but when I am attacked there is a problem. The problem is that this situation has found Dr. Riek Machar in Juba. There is no other way. Machar did not plan well during the peace negotiations in Addis Ababa and Khartoum and has now found himself in prison. Some people say he is not in prison but I say he is in prison. Why has he not visited areas under his control?

Q: Are you in communication with your boss Dr. Riek Machar?

A: I am in communication with him. I tell him we have been attacked here and there but he keeps quiet and only replies that it will be resolved? I ask, resolved when?

Q: If Dr. Riek keeps saying the problems will be sorted, while the attacks keep happening, what is your stand?

A: My stand now is that of self-defense. Well, Riek Machar is in peace but he is supposed to come and give us a briefing on the status and implementation process of the peace agreement. A lot of time has passed and nothing is being implemented successfully. If it is a comprehensive and genuine peace let him come and visit our locations and tell us this is peace.

Q: Since you are in communication with Dr. Machar, why don’t you ask him if the peace agreement is dead or alive?

A: That is exactly why I want him to visit areas under my control, these are areas where his soldiers are. This is what I want. But the government is not listening. If they listen, let them allow him to visit these places. Then we will know that there is peace.

Q: What message do you want to convey to the people of South Sudan as the Chief of Staff of the SPLA-IO?

To avoid a repeat of the Mogadishu attack, Somalia needs biometrics