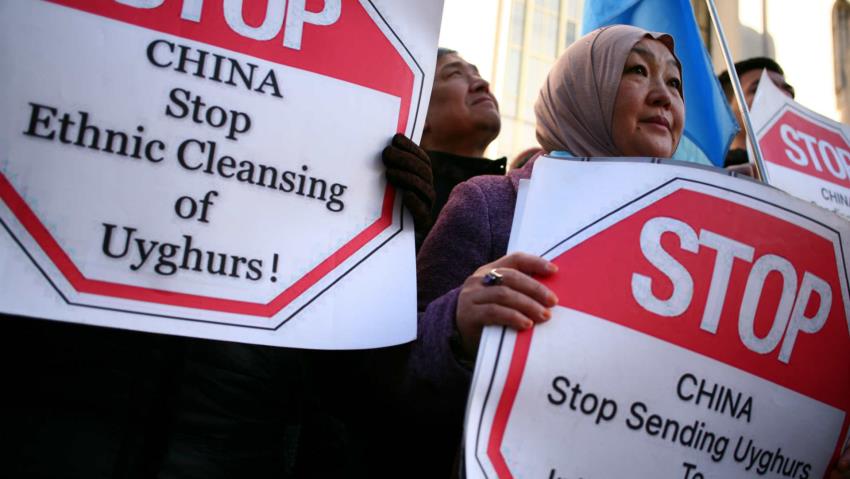 A number of Muslim-led Middle Eastern countries have arrested exiled Uighur Muslims and deported them to China in collaboration with Beijing, according to a BBC report.
Uighur Muslims living in exile in Middle Eastern countries to escape Beijing’s repression have been arrested and deported back to China, a Thursday BBC Newsnight report revealed.
The BBC said it has identified multiple cases of exiled Uighur students and pilgrims being targeted by authorities in Muslim-led countries – including Saudi Arabia, the UAE and Egypt – in collaboration with Beijing.

One Uighur woman – a mother-of -ive who had escaped the province of Xinjiang to resettle in Turkey – told the BBC she has not seen her husband in five years after he was arrested and transferred to China while performing his Hajj pilgrimage in Saudi Arabia.

“Our children have become fatherless, we have been left on our own,” she said.

Uighur human rights activist Abduweli Ayup, who has documented the pattern of Uighur persecution in the Middle East, told the BBC he identified five Uighurs deported to China by Saudi authorities.

“Among them, I know three of them,” he said.

Ayup also found Chinese authorities to have pressured the families of exiled Uighurs to convince their loved ones to return home, only to end up imprisoned.

In the official documents, the Chinese government ordered the tracking of those “for whom suspected terrorism cannot be ruled out”, who should be “arrested from the moment they cross the border” and “placed into concentrated education and training”.

At least one million Muslims, most of them members of the Uighur ethnic minority, are thought to be held in detention camps and centres across Xinjiang.

Beijing is accused of subjecting the detainees to torture, indoctrination and forced labour, as well as forcibly sterilising Uighur women.
The Chinese embassy to the UK told the BBC the claims are “based on fabricated rumours” and reiterated Beijing’s denial of the re-education camps in Xinjiang.

“In China, the rule of law guarantees citizens’ personal freedom and right to leave and enter the country,” the embassy said. “China has never pressed other countries… [to] forcibly deport people to China”.

The Saudi embassy to the UK told the BBC that the kingdom “fully complies with international norms and Saudi law when cooperating with other countries on issues such as deportation”.

“Saudi Arabia considers all deportations on a case-by-case basis, taking into account the nature and seriousness of any violation and paying no heed to a person’s race or religion,” it said.

In July, the Sunday Telegraph reported that Turkey has deported a number of Uighurs to third countries where it is easier for China to secure their extradition, despite Ankara’s outspoken stance against China’s treatment of the Muslim minority.

The Guardian on Friday reported China took a rare step in confirming to the United Nations the death of a Uighur man whose family believed had been held in a detention camp in Xinjiang since 2017.