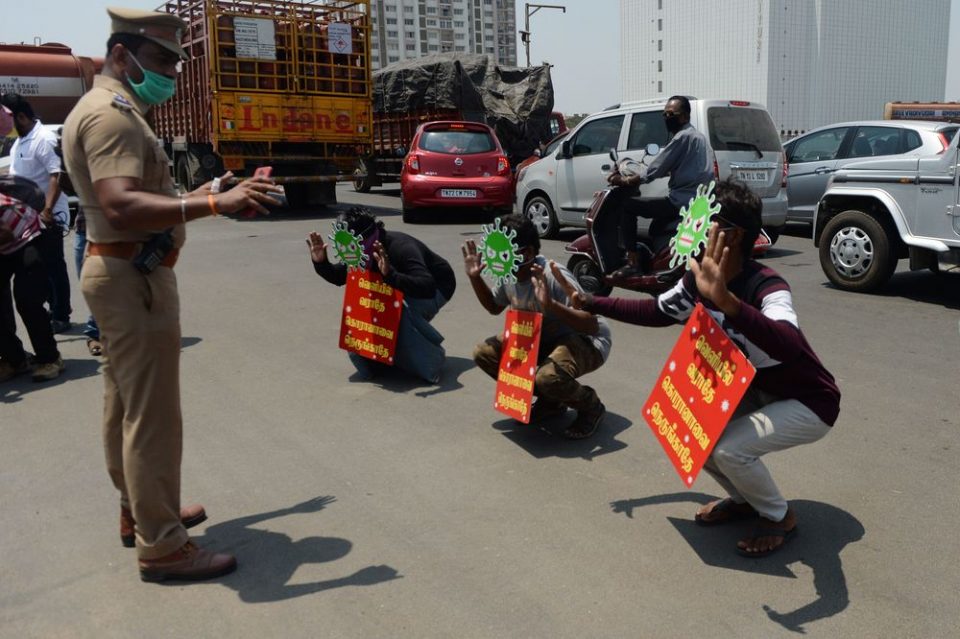 Mer wear masks depicting a coronavirus and placards reading “Don’t come out, don’t go near to corona” as a punishment for breaking lockdown rules in Chennai on April 1. Photographer: Arun
Politics

By:  Bibhudatta Pradhan, , Philip Heijmans and

When it comes to social distancing, some authorities are resorting to unprecedented tactics to try and slow the spread of Covid-19.

In India, baton-wielding police have beaten those who flout the curfew-like restrictions or fail to maintain physical distancing, while others have publicly shamed violators by forcing them do squats, push-ups, crawl or roll around on the streets. A video of a police officer writing “I have violated lockdown restrictions, keep away from me” on a man’s forehead, went viral in the South Asian nation. Action has been taken against the officer, Vivek Raj Singh, a senior police official in the state of Madhya Pradesh said.

Police in South Africa also forced people to roll along the road, kicking others as they performed squats for extended periods of time. After enforcing a 21-day nationwide lockdown on Friday, officers in Johannesburg were seen indiscriminately using water cannons on civilians and firing rubber bullets in the city’s poorest neighborhoods. Heavily armed officers stormed apartment buildings to check residents weren’t violating a shutdown in which the sale of alcohol and cigarettes are prohibited. South Africa’s police spokeswoman was not immediately available for comment.

In the Philippines, police and local officials have been accused by Human Rights Watch of arresting hundreds of people who broke curfew, social distancing and quarantine rules. In some cases, offenders were subject to public shaming and abuse as punishment for their crimes, including placing young people in dog cages and forcing others to sit in the scorching sun.

“The current state of public health emergency is no excuse for violating due process and the basic rights of the people,” Edgar San Luis, the mayor of Laguna province’s Santa Cruz municipality wrote in a Facebook post on March 20 in response to the dog cage detentions.

While most cases of over-zealous policing have been condemned by local authorities, who in some instances have called for the investigation of the officers involved, there remains growing concern over the harsh punishment meted out to vulnerable populations unable to socially distance due to overcrowded living conditions.

“The authorities will tend to default to using whatever means they have previously routinely applied to maintain political and social order,” said Tim Huxley, the executive director at the International Institute for Strategic Studies in Asia. In these circumstances where mass compliance will be necessary for a protracted period “it seems to me highly unlikely that coercive measures alone can work.”

Covid-19 cases have now topped 861,000 cases globally, and killed more than 42,000 people, according to data compiled by Johns Hopkins University.

Still while some countries have resorted to violence in an attempt to force social distancing, others are taking a different route.

In Mexico’s southern state of Yucatan people diagnosed with the virus or showing symptoms may be forced to serve up to three years in prison if they don’t quarantine themselves, local newspaper El Financiero reported. The Peruvian government has announced fines of about $600 for those who prank call its coronavirus hotline after it found 74% of calls were impertinent or malicious, according to the Lima-based newspaper Peru 21.

Battling a resurgence in imported coronavirus cases, Hong Kong on Tuesday warned residents to abide by home quarantine orders and social distancing regulations or face criminal prosecution and fines. The city has already caught more than 70 people violating some of the more than 50,000 home quarantine orders, sending them to government isolation centers. Authorities would pursue criminal charges against them, Chief Executive Carrie Lam told reporters at a weekly briefing.

Singapore has also imposed severe penalties for flouting social distancing regulations. The government last week announced it is a criminal offense to have gatherings of more than 10 people outside of work or school. People must also exercise physical distancing of at least one meter in settings where interactions are non-transient, such as queuing or sitting. The maximum penalty for either offense is a fine of S$10,000 ($7,000) and six months imprisonment.

“There’s a real consciousness about issues of public health and safety, and over the years also a growing sense of civic consciousness — it didn’t come about on its own,” said Gillian Koh, senior research fellow at the Institute of Policy Studies at the National University of Singapore, citing the city-states’s stringent rules against public littering and spitting that could cost repeat offenders up to S$10,000 in fines.

Police attempting to enforce social distancing restrictions in Australia have issued fines on a Victoria state massage parlor following a visit from the Sex Industry Coordination Unit, while in neighboring New South Wales, state police have been patrolling Sydney’s parks to ensure protocols are being enforced. Penalties can reach A$11,000 in fines and six months in jail