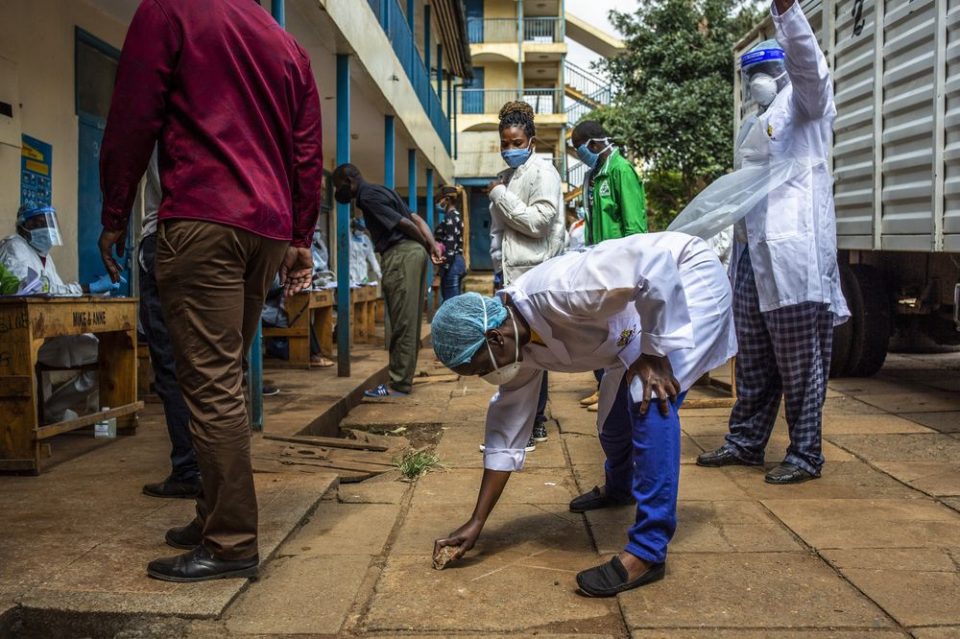 A health worker creates a social distancing mark on the ground for residents queuing for Covid-19 testing, in Nairobi, Kenya.
By David Herbling
June 29, 2020, 3:04 PM GMT+3

Kenya’s economy will contract for the first time in almost three decades, according to the International Monetary Fund.

The lender now sees gross domestic product shrinking by 0.3% in 2020, compared with an April projection of 1% growth, according to a regional economic outlook update published Monday. That will be the first annual contraction since 1993. The economy will expand 4% next year, the IMF said, down from 6.1% projected two months ago.

The coronavirus pandemic and measures to contain its spread have taken their toll on East Africa’s largest economy. Key foreign-income earners have been squeezed, with lockdowns in major export markets that wilted horticulture shipments, lower remittances from Kenyans abroad and travel restrictions that weigh on tourism.

Exports of flowers, of which Kenya is the biggest supplier in Europe, jumped 23% in May as orders returned to almost normal. In addition, shipments of black tea — Kenya is the world’s biggest exporter — jumped 15%. Still, central bank Governor Patrick Njoroge said last week it would be foolish to say the worst is over.

A government report on Tuesday will probably show GDP growth slowed to 4.3% in the first quarter, according to the median of six economists’ estimates in a Bloomberg survey. That would be the lowest rate in more than six years.