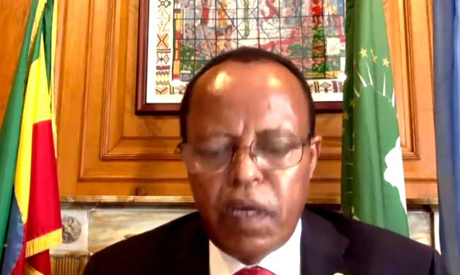 Ethiopia told the United Nations Security Council on Monday that it is not a legitimate place to discuss a controversial dam Addis Ababa is building on the Blue Nile, adding that taking the matter to the UN’s most powerful body sets a “bad precedent”.

“Ethiopia does not believe the issue being discussed today has a legitimate place in the Security Council,” Taye Atske-Selassie, Ethiopia’s permanent representative to the United Nations, told an open session held Monday to discuss the dam crisis.

“This council should not be a forum for exerting diplomatic pressure,” he said.

The meeting was scheduled after Egypt called on the UN to intervene to restart talks after renewed negotiations over the $4.8 billion Grand Ethiopian Renaissance Dam (GERD) failed to produce an accord last week, and following Ethiopia’s announcement it will go ahead with filling the dam’s reservoir in July, even without approval from downstream countries Egypt and Sudan.

“This year is an opportune time to begin impounding water in the GERD’s reservoir. Currently the Blue Nile and the White Nile have above normal flow, Lake Victoria is at a record high level and [Egypt’s] High Aswan dam is at a full supply level,” he said.

During the first stage of the filling of the dam, “Ethiopia will retain only above one-tenth of the average annual flow of the Blue Nile,” the Ethiopian official said.

“Ethiopia is of the view that progress at hand and a mutually beneficial agreement is within reach,” the Ethiopian official said.

Egypt, which relies on the Nile for 95% of its freshwater, fears the dam will significantly cut the river’s flow, while Ethiopia says the project is key to its development efforts.

Sudan joined Egypt in expressing concerns to the UN’s most powerful body, saying in a letter last week that the unilateral filling of the dam, located around 15 km from the Sudanese border, could “cause substantial risks” to Khartoum and endanger the lives of millions of people living downstream.

Sudan fears the giant Ethiopian dam will put the operation of its Roseires dam at risk if not properly designed, filled and operated.

Sudan on Monday called for setting up committees by the three countries to “reach amicable solutions within one week”.

“Ethiopia must ensure that any potential negative impact of this project is properly addressed and adequately mitigated, in close consultation and coordination with downstream countries,” said Omer Mohamed Siddig, Sudan’s permanent representative to the United Nations.

The Sudanese official said reaching an agreement before the commencement of the filling of the dam is “extremely necessary” and that any decision on the timing and the rules of the filing “has to be agreed upon”.

The Sudanese representative urged Egypt and Ethiopia to adopt a draft agreement Sudan had submitted during the last round of talks earlier this month as a basis for finalising a deal on the filling and operation of the mega dam.

He also called for “discouraging any party from any action that may jeopardise the efforts of the African Union,” which convened online emergency talks last week between the leaders of the three nations in a bid to resolve the deadlock.

“We strongly believe that the African-led process can push forward the three parties’ efforts to reach a comprehensive, fair, and balanced agreement