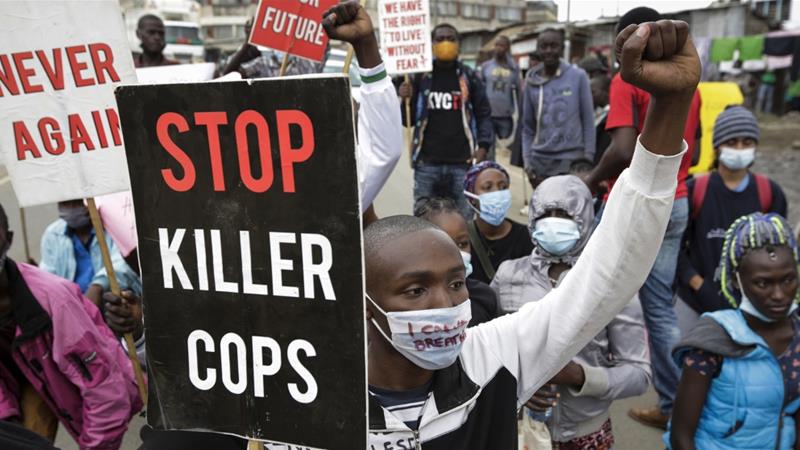 Rally in Nairobi comes after watchdog said officers were involved in killing of 15 since coronavirus curfew in March.

The rally on Monday came days after a police watchdog said officers were involved in the killing of at least 15 people since authorities imposed a coronavirus curfew in late March.

The crowd of some 200 demonstrators in Mathare, a densely populated settlement in Nairobi, was composed mostly of young people and mothers who carried signs with the names of friends, neighbours and sons killed in police operations in recent years.

Others held placards reading slogans such as: “Our life is priceless”, “Save our future” and “Never again”.

“I am here to protest for our youth who have died in the hands of the police without any wrongdoings and we are saying enough is enough. As mothers, many of our youths have been killed while being labelled as thieves,” Mathare resident Rahma Wako told AFP news agency.

Some 15 deaths and “31 incidents where victims sustained injuries” have been “directly linked to actions of police officers during the curfew enforcement”, it said.

In recent days, cities around the world have seen enormous protests against police brutality and racism following the killing of another Black man in the United States, George Floyd, at the hands of white officers.

Activists in Kenya have taken to social media to draw parallels with the country’s own scourge of police brutality, which typically goes unpunished.

Finally our voice is being heard, we are in slums but the whole world will hear our cries just like they heard George Floyd,” protester Cynthia Ochieng told Anadolu Agency.

In April, Human Right Watch (HRW) accused the police of imposing the curfew in a “chaotic and violent manner from the start”, sometimes whipping, kicking and tear-gassing people to force them off the streets.

It described the case of 13-year-old Yassin Hussein Moyo who died in the capital, Nairobi, on March 31 after being shot while standing on his balcony as police forced people into their homes on the street below.

In others, a tomato seller died in western Kakamega after being hit by a tear gas canister, while four men were beaten to death in different parts of the country.

“It is shocking that people are losing their lives and livelihoods while supposedly being protected from infection,” Otsieno Namwaya, HRW’s senior Africa researcher, said at the time. 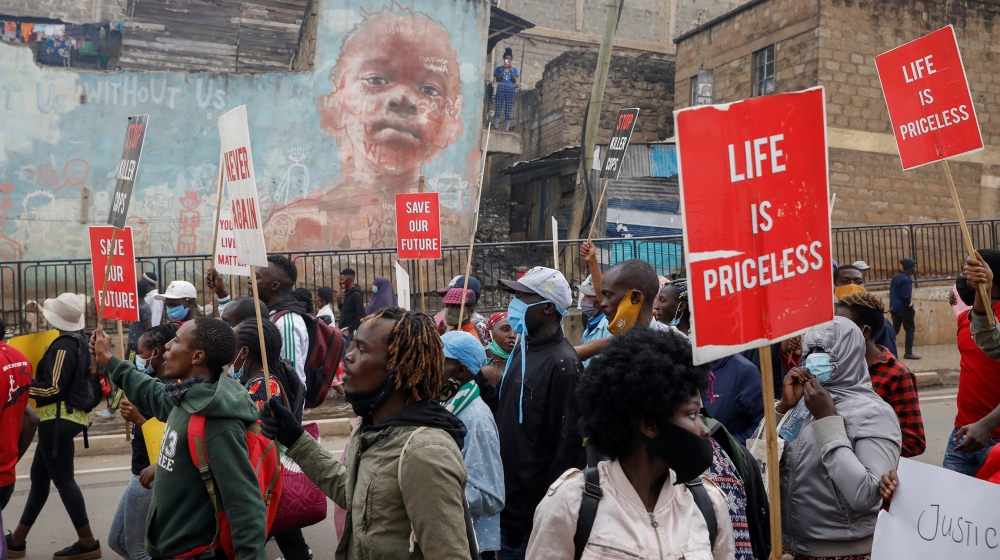 In a February report detailing the killing of at least eight people in Nairobi’s low-income neighbourhoods, HRW said police “continue to kill crime suspects and protesters in cold blood despite persistent calls to end the killings and the use of excessive force”.

Minister of Interior Fred Matiangi on Friday criticised police excesses, but “took exception to painting the entire service with the same brush”, his office said in a statement.

On Thursday, the IPOA announced six police officers would be arrested and prosecuted – one for Moyo’s death; another for shooting dead a secondary school teacher while responding to a burglary at a market in western Siaya; and four others for seriously assaulting a man during an arrest.

In early April, President Uhuru Kenyatta apologised for the violence following the enforcement of the curfew.

“I want to apologise to all Kenyans for … some excesses that were conducted,” he said at the time. “But I want to assure you that if we work together, if we all understand that this problem needs all of us, and if we pull in the same direction, we will overcome.”