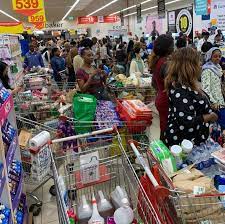 Nairobi — Interior Principal Secretary Karanja Kibicho has discouraged panic-buying of goods and relocations ahead of Tuesday’s polls amid reported scarcity of supplies including maize floor recently subsidized to retail at Sh100 per 2kg.

Speaking Thursday during a joint interview with Radio Jambo and Gukena FM, Kibicho said there is no cause for alarm adding adequate security personnel has been deployed across the country to maintain law and order before, during, and after the August 9 polls.

With only four days to the General Election, a section of Kenyans have expressed fears of election-related violence as candidates contesting for different positions battle it out.

Ruto has since named FOUR administration officials saying they were part of the plan to spread fear through the leaflets with his team saying the messages were used to justify skewed deployment of security agencies to instill fear among voters and suppress the turnout.

Matiangi said that the government will also deploy more resources including vehicles to allow easier movement of security agencies while maintaining law and order.

“We are going to deploy additional aerial resources to enable our police teams move around this region effectively and to be able to fly places to areas where there are challenges and if any challenges arises,” he said.

The government has since announced that it will deploy a total of 150,000 officers across the country to maintain law and order during the polls.

Inspector General of Police Hillary Mutyambai told journalists on July 22, that the security personnel which will include special police officers drawn from partner security agencies — Kenya Prisons Service, National Youth Service, Kenya Wildlife Service and Kenya Forest Service — will provide a safe environment for all Kenyans to cast their votes and ensure citizens conduct their activities without fear of crime or harm.

Mutyambai said that Formed Police Units (FPUs) under the National Police Service have also been deployed across the country to offer tactical support to general duty officers before, during, and after the General Election.

“Further, there is a provision for a deployment of five (5) Airset in strategic locations to provide logistical air support when and where required throughout the electioneering period,” he said.

He stated that the NPS has put in place elaborate measures and strategies to ensure that security is guaranteed throughout the electoral cycle and enable the IEBC to conduct a free, fair, and credible election.

He added that to enhance seamless election exercise the NPS has prepared and finalized a National Police Service Election Security Plan.

The plan will provide critical input into Operation Orders and deployment plans by respective commands for the polls.

Mutyambai said that the Police Service has also established a National Election Security Command Centre which is manned on 24-hour basis and equipped to handle all situational analysis related to election security.