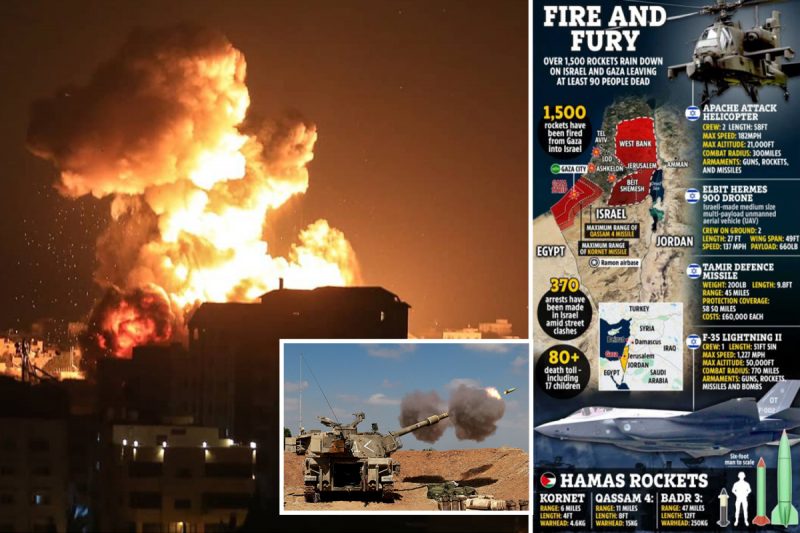 The Israeli army fired 450 missiles within 40 minutes overnight at 150 “targets” in Gaza, spokesman Avichay Adraee said in a tweet on Friday.

The airstrikes have continuously pounded apartments, blown up cars and toppled buildings, with Israel officials claiming to be targeting militants in the area.

As of May 14, Israeli strikes on Gaza have killed at least 119 Palestinians, including 31 children, 19 women, and wounded 830 people, according to Palestine’s Ministry of Health.

“These raids were to deal a heavy blow to the underground interests, the Hamas metro located under the northern and eastern neighborhoods in the vicinity of Gaza City,” Adraee said. “We enter the fifth day of the process and continue working aggressively.”

He also said 160 planes and six air bases were uses during the raid overnight.

Missiles have been fired out of Gaza by the Palestinian militant group Hamas; however, most have been intercepted using Israel’s Iron Dome system.

In recent days, tensions have soared over Israel’s planned eviction of Palestinians from the Sheikh Jarrah district in east Jerusalem, which Israel sees as part of its eternal capital but is considered occupied by the United Nations.

Israel has prepared combat troops along the Gaza border and was in “various stages of preparing ground operations”, a military spokesman said, a move that would recall similar incursions during Israel-Gaza wars in 2014 and 2008-2009.

Health authorities in Gaza said they were investigating the deaths of several people who they said may have inhaled poisonous gas. Samples were being examined and they had yet to draw any final conclusions, they said.