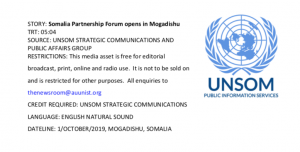 Mogadishu, 1 October 2019 – The Federal Government of Somalia and its international partners gathered in the country’s capital today for the 2019 Somalia Partnership Forum (SPF) – an opportunity for all concerned to take stock of the progress made by the country as well as agree on priorities ahead.

“The landmark achievements registered so far have been made possible due to the commitment from Somalia’s political stakeholders with generous financial and technical assistance from our partners,” said Somalia’s Deputy Prime Minister, Mahdi Mohammed Gulaid, in his remarks at the two-day event’s opening.

“Despite the promising prospects,” he added, “we are under no illusion to underestimate the myriad of challenges ahead for the country’s road to full recovery, which demands concerted political and financial commitments from both local stakeholders and international partners.”

The discussions among the Somali officials, ambassadors and other representatives centred on the areas of economic reform, security and justice reform, inclusive politics, social development and the principles of partnership.

In his remarks at the opening, Mr. Swan noted that despite the gains made so far, there was a need to set clear objectives and timelines with the goal of delivering on the set priorities by 2020.

“This Somalia Partnership Forum now offers an opportunity to chart a course forward for the next 12 to 15 months, with clearly defined priority objectives and timelines. While acknowledging – indeed, celebrating – progress to date, we must also be honest and frank about the challenges that remain,” the UN envoy said. “And, together, we must redouble efforts to overcome these challenges and ensure that 2020 is the year of delivery on the most important priorities.”

Mr. Swan noted that the intent was to focus on the so-called Mutual Accountability Framework (MAF) for 2019-2020, and have an active discussion and exchange of ideas for how to implement its content.

“Today, I suggest we seize the opportunity of so many friends of Somalia gathered around this table to emphasize concrete steps needed for implementation of priority commitments agreed in the Mutual Accountability Framework,” the UN Special Representative said.

The MAF details the joint commitments of Somalia and its international partners in the areas of political reforms, security, economic development, and recovery and humanitarian assistance, as the country rebuilds after decades of armed conflict and climate-related shocks.

Mr. Swan noted that amidst the focus on specific priorities for the coming year, the following were particularly looked forward to in the day’s discussions: preparations for national elections and the constitutional review, to be completed within the agreed timelines; plans for further action to degrade Al-Shabaab and build Somali security and justice institutions, using the principles of the plan known as the Comprehensive Approach to Security; next steps to meet requirements for the Heavily Indebted Poor Countries (HIPC) Initiative for debt relief by early 2020; and the collective response to the pressing needs of Somalia’s people by building resilience and sustainable development for Somalis, in keeping with partnership principles.

Later, during discussions on inclusive politics, Mr. Swan – who also heads the UN Assistance Mission in Somalia (UNSOM) – highlighted that all sectors of Somali society needed to be included in the political decision-making process, particularly women and youth, noting that “politics in Somalia cannot be fully inclusive without the meaningful participation of these large segments of the population.

This year’s Somalia Partnership Forum is the fourth of its kind, and the second time Somalia has hosted it, with the first time having taken place in December 2017. Last year, the conference was held in the Belgian capital of Brussels.

Speaking on behalf of the African Union Mission in Somalia (AMISOM), Amb. Madeira noted in his opening remarks that he was pleased that the SPF was being held in the Horn of Africa country.

“This is a telling message that Somalia has come a long way in building a conducive environment and capacity to perform its role as a fully-fledged member of the international community, including the capacity to host international conferences like this one, in its own territory,” he said.

The gathering continues and concludes on Wednesday, at which it will hear further from the country’s federal authorities as well as participating Federal Member States, and after which a communique on the way forward is expected to be issued.

(Story first published in the reliefweb)