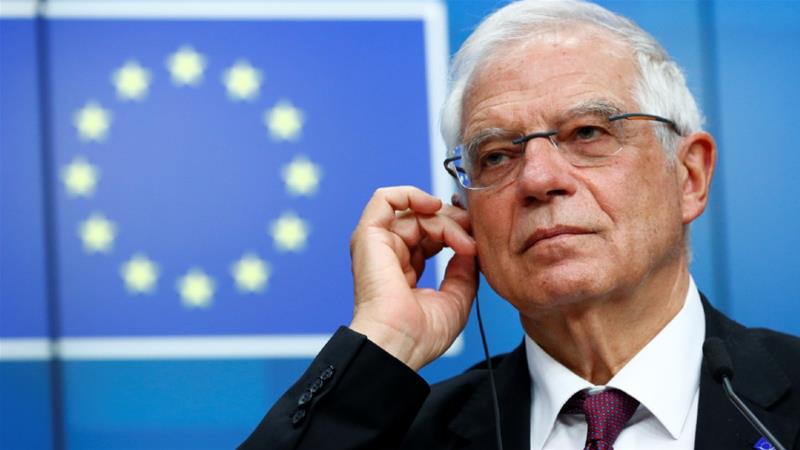 EU foreign policy chief Josep Borrell said the aim of the dispute mechanism was not to re-impose sanctions, but ‘to find a solution for the return to full compliance’ with the deal [Francois Lenoir/Reuters]

The European signatories to a nuclear deal signed between Iran and world powers in 2015 have triggered a diplomatic “dispute mechanism”, in their strongest response yet to Tehran’s steps away from the unravelling pact.

Following the US’ decision to withdraw from the deal almost two years ago, Iran began dropping its commitments under the deal, formally known as the Joint Comprehensive Plan of Action (JCPOA).

On January 6, days after the US assassination of a top Iranian general, Tehran took a further step back by announcing that it would scrap limits on enriching uranium, though it said it would continue cooperating with the United Nations nuclear watchdog.

“We do not accept the argument that Iran is entitled to reduce compliance with the JCPoA,” France, Germany and the United Kingdom said in a joint statement on Tuesday, adding they had no choice but to trigger the process that could eventually lead to UN sanctions.

“Instead of reversing course, Iran has chosen to further reduce compliance,” the statement said.

Josep Borrell, the European Union’s foreign policy chief, said the aim of the dispute mechanism was not to re-impose sanctions, but “to find a solution for the return to full compliance” with the deal, which was also signed by Russia and China.

The accord – deemed at the time to be a landmark achievement – sought to prevent Iran from developing nuclear weapons in exchange for sanctions relief and global powers beginning to welcome the country back into the international community.

US President Donald Trump called it “the worst deal in history” and in May 2018 unilaterally withdrew from the deal, re-imposing crippling sanctions which have devastated Iran’s economy.

In response, Tehran challenged the European powers to fulfil their part of the deal and boost its economy.

In an apparent bid to keep the door open for diplomacy, the three European signatories – known as the E3 –  said they were not joining the US campaign to implement “maximum pressure” against Iran.

“Given recent events, it is all the more important that we do not add a nuclear proliferation crisis to the current escalation threatening the whole region,” they said.