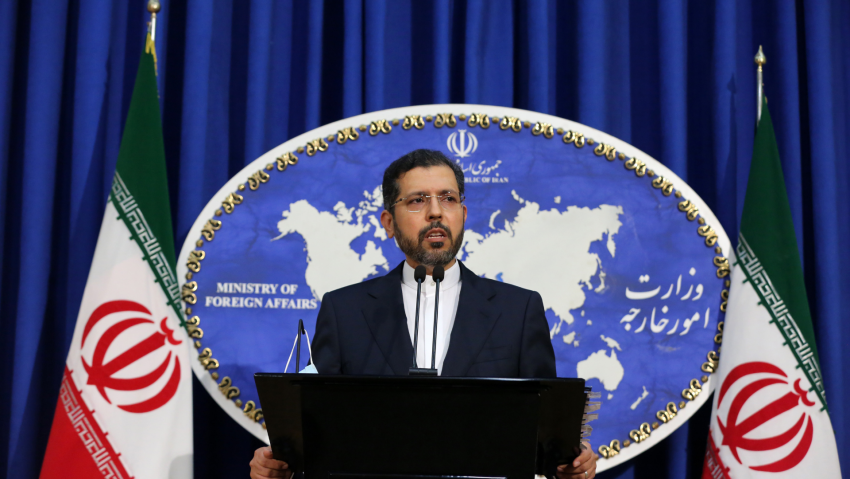 Iran’s foreign ministry spokesman has suggested that Saudi Arabia’s policy shifts in the context of a friendlier US administration could lay the groundwork for dialogue between Tehran and Riyadh.

Iran has indicated a willingness to enter negotiations with Saudi Arabia if it changes its policy of containing Tehran’s regional influence, Iranian state media has reported.

In an extended interview with ISNA news agency, Iranian foreign ministry spokesman Saeed Khatibzadeh appeared to acknowledge that some of the “fears” of Saudi Arabia regarding Iran were legitimate and worth discussing.

“It is possible Saudis have some fears. As it happens, we strongly believe these should be discussed. Establishing peace in the strait of Hormuz is one of these,” he said.

Saudi Arabia and the United States have accused Tehran of carrying out numerous attacks on oil tankers in the Strait of Hormuz, a strategic waterway between Iran and the Arabian Peninsula through which a fifth of the world’s oil passes.

However, Khatibzadeh also added caveats. He said that Saudi Arabia’s other grievances were “illusory” and could “open the path to other forces in the region”. Without specifying what they were, he said Iran was ready to discuss those issues as well.

Iran’s network of proxies involved in the wars in Yemen and Syria, as well as its deep influence in the domestic politics of Iraq and Lebanon, have provoked hostility from the US, Saudi Arabia and Israel – who see Iran’s influence in those countries as a threat to their interests.

Tehran has also abandoned pledges to limit uranium enrichment following former US President Donald Trump’s unilateral withdrawal from a 2015 nuclear deal and reimposition of sanctions. This has further escalated hostilities.

However, US President Joe Biden has expressed willingness to return to diplomacy with Iran, something which may force Saudi Arabia to tone down its approach in dealing with arch-rival Iran.

“If Saudi Arabia is serious about reforming its foreign policies and realises that the way to go about solving regional problems is through cooperation, then the first country that will welcome this change will be Iran”, Khatibzadeh said.

He added that if this was the case, then Iran would enter negotiations.

Riyadh, the dominant Gulf Arab power, has not publicly indicated willingness to engage with Iran. Its two regional allies Bahrain and the UAE – who along with Saudi Arabia imposed a recently lifted three-year blockade of Qatar, claiming that the country was “too close to Iran” – continue to see Tehran as a regional menace.

Iran’s Foreign Minister Mohammad Javad Zarif recently claimed that in his first few weeks as the country’s top diplomat he had reached out to Saudi Arabia to open dialogue  but that his approaches were rejected.

Separately in his interview with ISNA, foreign ministry spokesman Saeed Khatibzadeh discussed Iran’s seizure of a South Korean tanker seized in the Gulf, claiming that issue was “technical” and not “political” and saying that the vessel had apparently infringed maritime environmental laws.

Tehran has urged Seoul to release billion of dollars of its assets frozen in South Korea as part of US sanctions. Khatibzadeh said that Iran could use some of the money to pay for its right to vote in the UN’s General Assembly, which it lost last week along with the Central African Republic, the Republic of Congo, and South Sudan due to non-payment of dues.

Agencies contributed to this report.