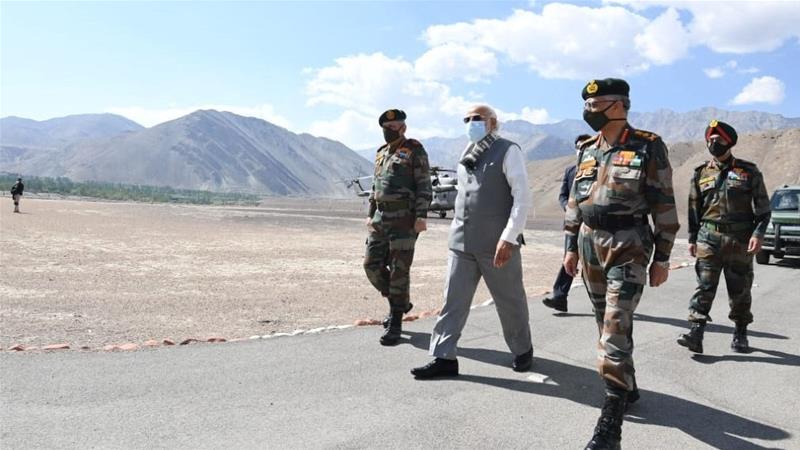 Indian Prime Minister Narendra Modi has said that “age of expansionism” is over, as he paid tribute to soldiers killed in last month’s border skirmish with China in a surprise visit to the northern Himalayan region of Ladakh amid escalating tension between the Asian giants.

“Age of expansionism is over, this is the age of development. History is witness that expansionist forces have either lost or were forced to turn back,” Modi said without naming China during his first trip to the disputed region since June 15 deadly border clash left at least 20 Indian soldiers dead.

Modi, who has been under pressure to respond to what India deems Chinese incursions, met troops at a base in Ladakh’s Nimu area, pictures from Reuters partner ANI showed.

“Your courage is higher than the heights where you are posted today,” he said during his address to soldiers in Ladakh.

“The bravery that you and your compatriots showed, a message has gone to the world about India’s strength.”

Modi was accompanied by the chief of defence staff, General Bipin Rawat, and the chief of the army, General Manoj Mukund Naravane.

India and China have traded blame for triggering the high-altitude brawl in the Galwan Valley on June 15, in which 20 Indian soldiers were killed and at least 76 were injured.

The border clash saw soldiers engaged in brutal hand-to-hand fighting with clubs and staves about 4,270 metres (14,000 feet) above sea level amid sub-zero temperatures. It was the worst border skirmish in nearly 50 years. 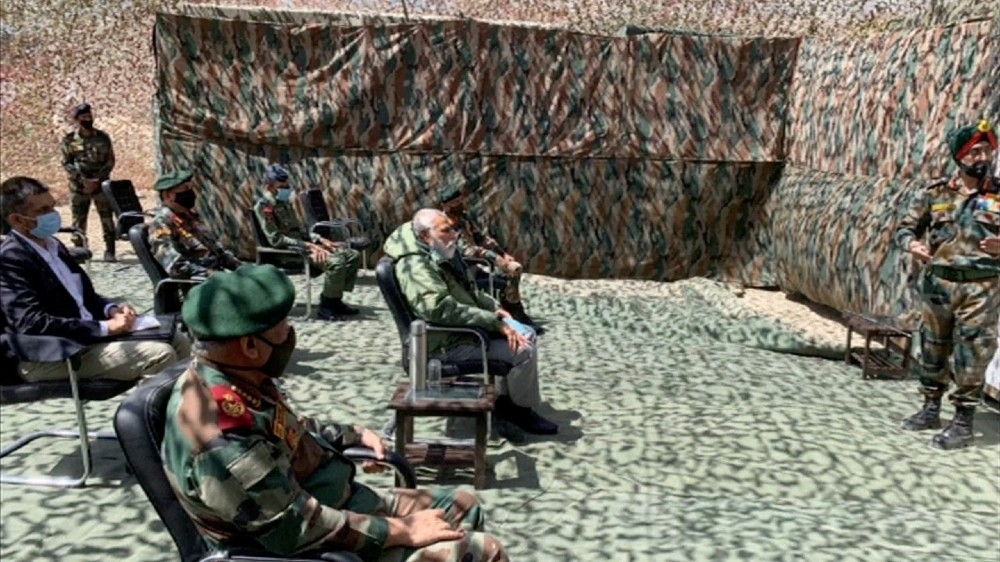 Officials said Modi was accompanied by the chief of defence staff, General Bipin Rawat, and the chief of the army, General Manoj Mukund Naravane [Reuters]

China has not disclosed how many casualties its troops suffered.

The nuclear-armed neighbours have amassed troops along the 3,500km (2,200 mile) long border, most of which is not demarcated, and military and diplomatic talks are going on to de-escalate the confrontation.

Analysts say the current standoff at the Line of Actual Control (LAC) is a result of Chinese pushback against India’s building of military infrastructure at the de facto border in recent years.

Another reason, according to some experts, is linked to India’s unilateral move last year to repeal Article 370 of the Indian constitution, which had guaranteed a measure of autonomy to Indian-administered Kashmir, which also included the disputed areas of Ladakh region.

Meanwhile, India’s Ministry of Defence on Thursday approved the purchase of 21 Russian MiG-29 and 12 Sukhoi Su-30MKI fighter aircraft costing $2.43bn to augment its air force in the wake of the border standoff with China.

India is also awaiting the arrival of the first batch of 36 Rafale fighter jets ordered as part of a $8.78bn deal signed with France in 2016.

Last week, India banned 59, mostly Chinese, mobile phone applications in retaliation to the killing of its soldiers that has caused an anti-Chinese backlash.

China said on Friday that artificial blocks to bilateral cooperation would harm India’s interests and that the two countries should work together to uphold peace in their border region.

Yemen: a moral test for the UK