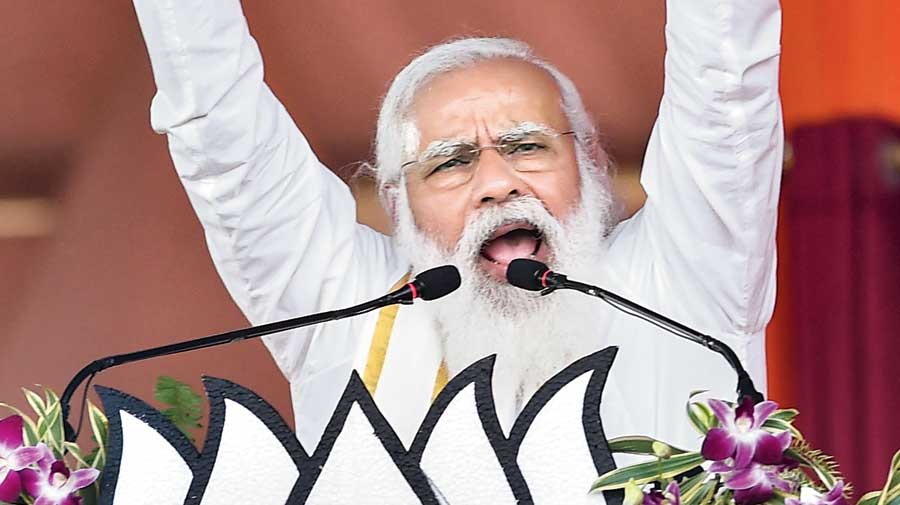 In its latest report the US watchdog observes that the free world had shrunk as a result and that the country was being driven towards ‘authoritarianism’
Anita Joshua   |   New Delhi   |   Published 04.03.21, 01:43 AM

India has been dropped from a list of “free” countries drawn up by an 80-year-old democracy watchdog mostly funded by the US government.

Freedom House has placed India in the “partly free” category in its latest report that carries the observation that the free world had shrunk as a result and that the country was being driven towards “authoritarianism”.

Freedom House is a Washington-based non-profit, non-government organisation that has been conducting research and advocacy on democracy, political freedom and human rights since 1941.

The report released on Wednesday notes that instead of “serving as a champion of democratic practice and a counterweight to authoritarian influence from countries such as China, (Prime Minister Narendra) Modi and his party are tragically driving India itself toward authoritarianism”.

Elsewhere in the report, Freedom House states: “Under Modi, India appears to have abandoned its potential to serve as a global democratic leader, elevating narrow Hindu nationalist interests at the expense of its founding values of inclusion and equal rights for all.”

There was no immediate response from the Indian government to the report that comes in the wake of increased concern in several world capitals on the human rights situation in the country.

US secretary of state Antony Blinken described the Freedom House report as “sobering” in his first foreign policy speech.

“A new report from the independent watchdog group Freedom House is sobering. Authoritarianism and nationalism are on the rise around the world. Governments are becoming less transparent and have lost the trust of the people…,” Blinken said.

Explaining the reason for shifting India, Freedom House stated: “India’s status declined from free to partly free due to a multiyear pattern in which the Hindu nationalist government and its allies have presided over rising violence and discriminatory policies affecting the Muslim population and pursued a crackdown on expressions of dissent by the media, academics, civil society groups, and protesters.”

Some of the specific reasons for the change in scores on various counts that resulted in India losing its “free” status include the frequent use of the sedition law and other charges to deter free speech, the restrictions on foreign funding of NGOs and the action against Amnesty which resulted in it shutting shop in India, “the unusual appointment of a recently retired chief justice to the upper house of Parliament”, and the “excessively harsh” lockdown that triggered the displacement of millions.

According to the report, the Modi government and its state-level allies continued to crack down on critics in 2020, and “their response to Covid-19 included a ham-fisted lockdown that resulted in the dangerous and unplanned displacement of millions of internal migrant workers”.

It also took note of the “corona jihad” narrative whereby “the ruling Hindu nationalist movement also encouraged the scapegoating of Muslims, who were disproportionately blamed for the spread of the virus and faced attacks by vigilante mobs”.

Given that India is the world’s most populous democracy, the free world has shrunk because of the country’s fall from the upper ranks of free nations, the report noted, adding that it could have a particularly damaging impact on global democratic standards.

“Political rights and civil liberties in the country have deteriorated since Narendra Modi became Prime Minister in 2014, with increased pressure on human rights organisations, rising intimidation of academics and journalists, and a spate of bigoted attacks, including lynchings, aimed at Muslims. The decline only accelerated after Modi’s reelection in 2019,” the report said.

“Last year, the government intensified its crackdown on protesters opposed to a discriminatory citizenship law and arrested dozens of journalists who aired criticism of the official pandemic response. Judicial independence has also come under strain; in one case, a judge was transferred immediately after reprimanding the police for taking no action during riots in New Delhi that left over 50 people, mostly Muslims, dead,” the report pointed out.

It took note of the law curbing inter-faith marriages in Uttar Pradesh.

While the chapter on India in the Freedom House report acknowledged that the 2019 Lok Sabha elections were considered generally free and fair, it placed on record questions raised about the impartiality and competence of the Election Commission of India.

“The Commission is generally respected and had been thought to function without undue political interference. In 2019, however, its impartiality and competence were called into question. The panel’s decisions concerning the timing and phasing of national elections, and allegations of selective enforcement of the Model Code of Conduct, which regulates politicians’ campaign behaviour and techniques, suggested bias toward the ruling BJP.”

The report flagged as a cause of concern “the opaque financing of political parties, notably through electoral bonds that allow donors to obscure their identities”.

The report noted that a great deal of corruption cases go unreported and unpunished, and “the authorities have been accused of selective, partisan enforcement”.

The delay in setting up the Lokpal and Lokayuktas has been recorded, as also the diluting of the RTI law by the Modi government.

The attacks on the media have found mention, and the perception that the Prime Minister’s call to the media to help prevent the spread of “pessimism, negativity, and rumour mongering” was a warning not to criticise officials’ management of the pandemic.

“Academic freedom has significantly weakened in recent years, as intimidation of professors, students, and institutions over political and religious issues has increased…. Academics face pressure not to discuss topics deemed sensitive by the BJP government, particularly India’s relations with Pakistan and conditions in Indian Kashmir,” the report said.