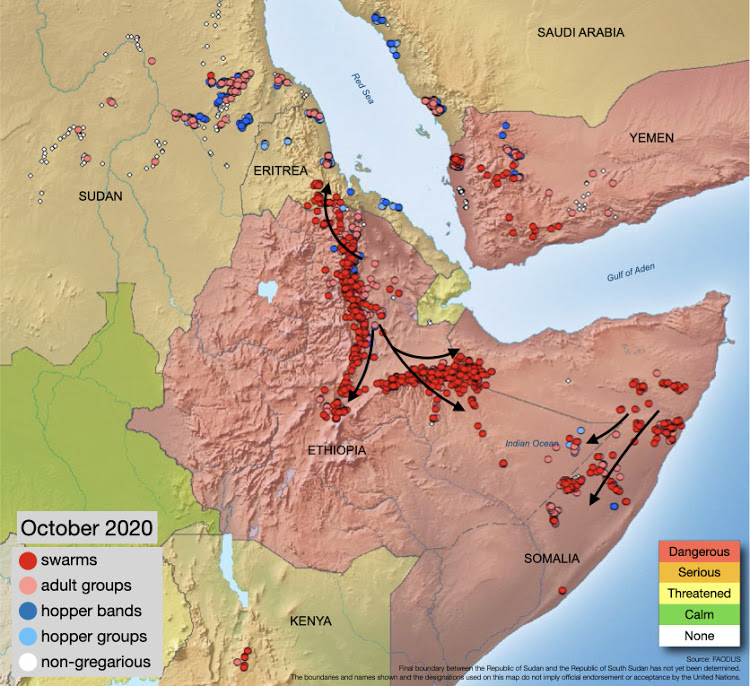 • The Monday update indicated that the epicentre of the locust invasion is shifting to eastern Ethiopia and Somalia.

A new generation of immature swarms could move to Northeast Kenya in early December, UN-food agency FAO has said.

The Monday update indicated that the epicentre of the locust invasion is shifting to eastern Ethiopia and Somalia.

Dr Kasina Muo, chairman of the Entomological Society of Kenya, confirmed that counties bordering Ethiopia and Somali are at risk of another locust invasion. They include Wajir, Marsabit, Mandera and their immediate neighbours.

Muo said a few swarms are still being reported in Turkana and Samburu counties but control process by the government and FAO has been ongoing and the situation has been tamed.

“Those in the two counties are not a big problem but the big threat are immature swarms that could move to Kenya from Somalia, Ethiopia and Eritrea in the coming month,” he said.

The FAO report showed that as anticipated, numerous swarms formed in Northeast Ethiopia during October because of unusually good summer rains.

“In the Horn of Africa, the epicentre of locust populations is now shifting to the Somali region in Eastern Ethiopia and adjacent areas of Somalia where control operations are in progress”.

The report says that a new generation of breeding has commenced in the area, as mature swarms in northeast Somalia moved southwards to central areas of the country and adjacent areas of the Ogaden in the Somali region of eastern Ethiopia.

“Egg-laying and hatching are in progress, and hoppers are forming bands,” the locust watch said.

It further indicated that more hatching and band formation will continue during the remainder of the month, especially as swarms arrive from Northeast Ethiopia.

Breeding is expected to continue throughout the winter along the Red Sea coast of Sudan, Eritrea, Yemen and Saudi Arabia, causing a further increase in locust numbers.

“The situation remains calm in West Africa and southwest Asia and no significant developments are expected,” FAO said.

According to FAO’s May–August progress report on the desert locust upsurge response in the greater Horn of Africa and Yemen, control has been successful in Kenya, down to two from 29 affected counties, but East Africa remains at significant risk.

The report further showed some countries such as Ethiopia and Somalia are now fighting a third generation of locusts.