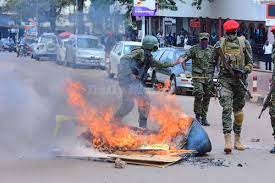 The governments and fighters in Inter-Governmental Authority on Development (Igad) member states killed 10,000 citizens in 2020 alone, translating into 27 deaths a day.

The figures compiled by Igad show that most of the deaths occurred during riots, gun battles with outlawed fighters and attacks. Majority of the fatalities were recorded in Somalia, South Sudan, and Sudan.

It also says excessive response by government forces in quelling protests featured prominently during the year under review.

While officials from the secretariat did not provide figures of how many people were killed in 2019, they said the latest figures show that the region is still prone to violence and that a lot needs to be done to combat such violent incidents.
Countries such as South Sudan, Somalia, and Sudan continued to lead with the trend that has been happening for the last several years.

In Uganda, deaths were mostly attributed to riots and excessive response by security forces during such riots.
A number of women and other murder cases were separately documented across the country, adding to the killings during the year 2020.

Igad executive secretary Workneh Gebeyehu during the Conflict Early Warning and Response (CEWARN) mechanism meeting at Entebbe on Friday said the deaths indicate that violence is still prevalent in the region, a vice member’s states must work hard to end.

“The latest CEWARN report shows that there has been a significant spike in violent incidents across our region. In 2020 alone, 10,000 of our brothers and sisters lost their lives in conflict-related situations. This is alarming and it is no longer tolerable,” he said.

Mr Gebeyehu also said allowing differences and disagreements to escalate into conflict and combat should not be entertained and that countries must strive to resolve misunderstandings at the earliest opportunities possible.
He said a number of countries in the region are up in flames and that more efforts are needed to stabilise the situation.

“As we convene here today, parts of our region are in crisis. The situations of the tension on Ethiopia-Sudan border as well as developments in Mogadishu, the capital of the Federal Republic of Somalia, are matters of great concern,”  the executive secretary said.

Hot spots
According to the 2020 conflict mapping system,  central region had most of the incidents with Kampala and Wakiso districts, where pro-Bobi Wine demonstrators were shot dead, accounting for majority of the killings. Other violent cases were also reported in Kasese, Kanunugu, Kisoro, Kabale, Luweero, Jinja, Iganga and Gulu City as well as Ntungamo and Mitooma districts.

Somalia had Mogadishu and other coastal areas as the main epicentres of violence while South Sudan had dotted spots across the country.

Mr Gebeyehu  said: “These active situations are unfolding against a backdrop of the perennial threat of violent extremism in addition to further underlying causes, triggers and drivers of conflict in our region including; the Covid-19 pandemic, climate change, unpredictable weather patterns and successive invasions of desert locusts that have collectively threatened food and livelihood security in our region.”

The executive secretary also said the youth are the biggest victims of conflicts in the region.
“As a result, regional cooperation on conflict prevention through early warning and response has never been more urgent. By safeguarding ourselves against future conflict, we are safeguarding our youth and the future of our region,” he said.

Mr Gebeyehu  indicated that while the region has put in place an early warning mechanism, not much has been done to respond in time to such warnings.

“It is, therefore, worrying that at the global level, the lion’s share of investment has been towards reacting to conflicts instead of preventing them,” he said.