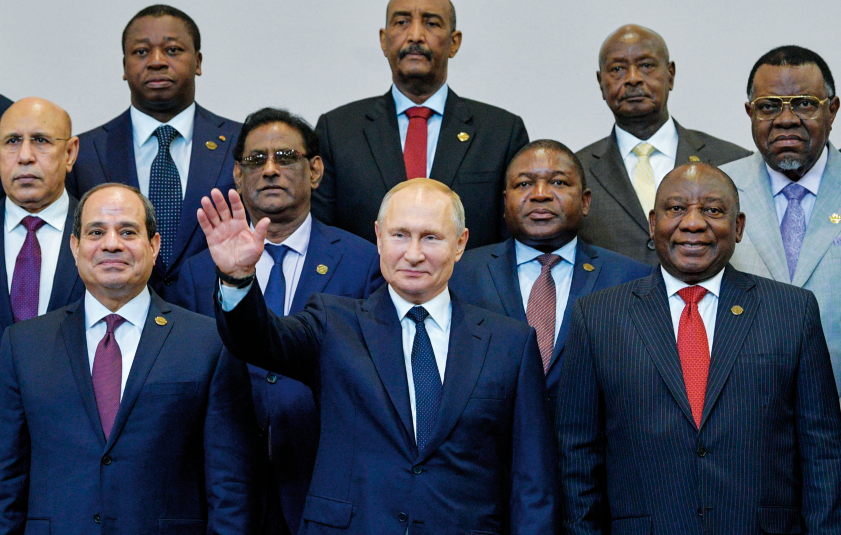 Russia has become increasingly active in Africa in recent years. Gyude Moore examines its activities and argues that they signal a need for Africa to adopt a common strategy for dealing with powerful external actors.

In a complex international system where great powers designate each other as allies or competitors for power and influence, small states inevitably have the uncomfortable role of involuntary props or proxies. They are repeatedly drawn into great power competitions, usually against their wishes, and pressed to embrace one camp or another.

So it was that the 2019 Russia-Africa Summit invited significant scrutiny about Russia’s intent, methods, and motivations in Africa. The summit was framed through a narrative that saw any diplomatic gains for Russia in Africa occurring at the expense of the US. The various goals, priorities, and motivations of African leaders for welcoming engagement with Russia were largely ignored or at best, received peripheral treatment.

It is important that Europe and the US note that Africa’s needs – whether economic, security, or demographic – ensure that Russia will always have a role in Africa. In pursuit of domestic and foreign policy objectives, African states form partnerships and take positions based on their needs. A policy that sees Russia as a bit player or largely illegitimate is inaccurate and undermines an effort to shape a continental response.

Russia, like China, possesses unique competencies that are suited to the needs of individual African countries. And while it lacks a cheque book the size of China’s and the development dollars of the US or the EU, it is still a significant global player. Russia does not engage with the African continent as a unit, but individually with 54 relatively small states. That Russia’s resources do not match those of China or Europe is inconsequential when compared to its relative strength vis-à-vis smaller, weaker African governments. This disparity and the continent’s needs guarantee a space for Russia in Africa, particularly in the defence sphere.

Earlier this year, I attended a dinner with senior political leaders of the Central African Republic (CAR), where I shared experiences about how we had rebuilt Liberia after its civil war and I learned about how they had experienced their own.

By early 2017, the CAR had been in the grip of inter­mittent civil war for years. As fighting began to increase again, the government in Bangui turned to France, the former colonial power, for arms. However, the French were prevented by the UN arms embargo from supplying weapons.

The government subsequently reached out to Russia, which sought and obtained approval from the UN Security Council to supply the government with arms, and sent advisers to train its troops to use them. Now the government has come to depend on the Russians, and it is difficult to imagine a future in which Russia has no role in CAR.

Elsewhere, Nigeria has sought to sign a military technical cooperation deal with the Russians to help fight Boko Haram militants, whose insurgency has troubled the country for over a decade.

For the last two years, Mozambique has battled an Islamic insurgency whose affiliation and motivations remain unclear. As in the Central African Republic, Russia has sent advisers to assist Mozambique in tackling the problem.

Russia’s presence and actions in Africa are not uniformly illegitimate or malign. For example, in Egypt, where the price of bread is a national security concern, Russia is the largest supplier of wheat. An international strategy that recognises this, but works with individual African states, the African Union (AU), or the regional economic communities to define mutually beneficial engagement will be more useful than pretending Russia does not have an important role in play in Africa.

The legitimacy of its presence in Africa notwithstanding, Russia has sometimes conducted itself like a rogue actor. Facebook recently removed several accounts said to be involved in an enormous Russian-backed campaign testing new disinformation tactics in parts of Africa. The Russian ambassador to Guinea caused a stir a year ahead of the country’s presidential elections when he suggested that the current president, Alpha Conde, should change the constitution and seek a third term.

In early November, the New York Times reported that some 200 Russian fighters had arrived in Libya as part of a “broad campaign by the Kremlin to reassert its influence across the Middle East and Africa.” Russia had reportedly deployed advanced Sukhoi jets, coordinated missile strikes and precision-guided artillery, as well as snipers, just as it has done in Syria, to support warlord Khalifa Haftar in his fight against the UN-backed Government of National Accord. These are not the actions of a responsible stakeholder, but of an opportunistic spoiler.

There is no reason why the AU, in support of its members, cannot demand behaviour from Russia that is commensurate with its role as a responsible stakeholder. Just as it did when it drew up its “Common African Position on the Post-2015 Development Agenda”, it must craft a “Common African Position on Partnerships” prescribing conditions of engagement with external actors. This instrument could be used to gauge and attempt to influence the behaviour of all external actors in Africa. To expect small states to demand such rules be observed in bilateral relations with giants is unreasonable.

There is no guarantee that such an approach would alter Russia’s behaviour or change how external actors conduct themselves on the continent. Next year, the UK and France will host Africa summits. The timing could not be better for the AU to outline principles of engagement for all external actors. But absent an African foreign policy position, guidance will suffice.

Africa’s complex political make-up, extensive human development deficit and relative weakness guarantee relevance for Russia in the foreseeable future. The 2019 Russia-Africa Summit was Russia’s attempt to establish legitimacy. The AU ought to call its bluff and prescribe rules of engagement that demand its behaviour be that of a responsible and legitimate stakeholder.

Gyude Moore is a senior policy fellow at the Center for Global Development and was previously minister of public works in Liberia.