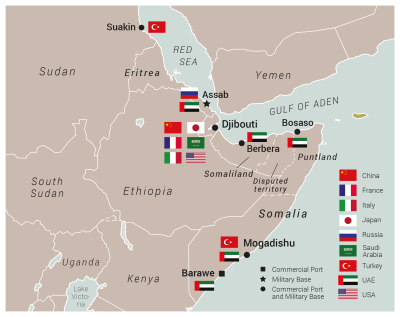 The Horn of Africa is the closest landmass of Africa to India and has ancient links which continue till date. New Delhi is keeping a keen eye on the region

As 2022 begins, the situation in the Horn of Africa (HoA) seems pessimistic. The resignation of Sudan’s civilian Prime Minister Abdulla Hamdok on 2 January was not a good portend.

Despite successful elections in Uganda and Djibouti in 2021, the rest of the Horn is mired in conflict, which has augmented the challenges of COVID-19, climate change, et al. In a recent state of the region speech, the executive secretary of the Inter-Governmental Authority on Development (IGAD), Workneh Gebeyehu, mentioned how the challenges to peace and security were now the focus of the HoA. What he left unsaid was that the region is destabilzed through internal conflicts in several countries.

The HoA is the closest landmass of Africa to India and has ancient links which continue till today. India is keeping a keen eye on the region. Minister of State for External Affairs V Muraleedharan visited Sudan and South Sudan in October 2021. India opened new embassies in Eritrea and Djibouti, with Somalia on the anvil. Thus, India will be represented in all HOA countries soon.

Traditionally, the HoA consists of four countries: Ethiopia, Eritrea, Djibouti and Somalia. As part of the IGAD, the greater Horn countries including Kenya, Uganda, Sudan and South Sudan are members. The eight countries, three of which are landlocked, together have a 7,000 kilometre coastline over the Indian Ocean, Gulf of Aden, Gulf of Tadjoura and the Red Sea.

They also have a low level of economic integration.

The biggest challenges of 2022 for the HoA relate to peace, security and stability. South Sudan, which was perhaps among the most unstable of the countries, is sticking to its plan of transition up to 2024 and working out viable solutions with IGAD suppor. This process needs to continue. Attention was diverted from Juba because of the military coup in Khartoum, which unseated Prime Minister Hamdok, the IGAD chairman. This created a new crisis in the HoA. The restoration of civilian rule and respect for fledgling democracy in Sudan, which lead to optimism, are now huge challenges.

Djibouti held elections in April 2021 and President Ismail Omar Guelleh was re-elected for the fifth time. In power since 1999, he maintains stability in the small but strategically important state which hosts military bases from France, the US, Japan and China.

Uganda had a terrorist attack in November 2021, but held contentious elections in January, the results of which led to the return of President Yoweri Museveni and a sense of stability in the country. Museveni has ruled since 1986.

Kenya has had internal problems with Somali-based terrorists and diplomatic spats with Somalia. With its position in the UN Security Council, Kenya, under President Uhuru Kenyatta, plays a stabilising role in the HoA. Kenya has elections in August and its attention will be focussed on its internal matters.

The biggest disappointment has been Ethiopia. It was the pillar of the HoA for economic activity, connectivity, peace and stability. Since November 2020, the civil war in Ethiopia has affected the HoA negatively.

Ethiopia hosts the African Union, and its former foreign minister is the executive secretary of IGAD in Djibouti. However, Ethiopia and its Tigray and Oromo rebels seem to believe fighting the best solution. In 2022, they will exhaust themselves and some modicum of political discussion may begin. Ethiopia, whose role was critical for stability, has become a drag on the HoA and a danger to peace and stability unless it resolves its problems.

Eritrea has come out of its shell by participating in the onslaught on the Tigray, with whom it has had a hateful relationship for the past 30 years. Eritrea operates in the Tigray and is befriending the Amhara elite after engaging Addis Ababa. It will be a determined player in Ethiopia and in the HoA.

Eritrea, Ethiopia and Somalia were the new power axes in the Horn of Africa. Without a full settlement internally in Ethiopia, the trio are unable to reorder the HoA but have destabilized it for sure.

Somalia successfully reconstituted the upper house through indirect elections but the parliamentary and presidential elections were postponed by President Mohamed Abdullahi Mohamed ‘Farmaajo’ who fell out with Prime Minister Mohamed Hussein Roble. COVID was the main reason for postponing elections, the same reason given in Ethiopia to postpone elections from 2020 to 2021. There is suspicion that the current group which leads Somalia is reluctant to relinquish power.

They have the backing of Eritrea and Ethiopia and are antagonistic towards Kenya, which originally helped along with Ethiopian troops to maintain the balance against Al Shabab. The rupture in Somalia-Kenya relations and the withdrawal of Ethiopian troops for their civil war, emboldened Al Shabab who now are a bigger threat in Somalia, Kenya and Uganda. IGAD has drawn attention to this loosening of controls over Al Shabab.

Restoration of order in Somalia with whatever elections can be arranged, and overcoming internecine clan battles, is now necessary. With both Ethiopia and Kenya busy with internal processes, Mogadishu seems to be having a free run of what the current ruler wants.

A significant emerging aspect in the HoA is Somaliland. Somaliland, Puntland, and Jubaland are three islands of stability in Somalia, which ran autonomously from the control of Mogadishu. Somaliland is the most autonomous of all and has a semblance of good governance and good economic performance. It has better infrastructure with the Berbera port attracting foreign investment from the UAE. Some interlocutors believe that Somaliland is ripe for recognition as an independent country. Somaliland opened relations with Taiwan in preference to China, which otherwise dominates the region.

The Somaliland question is likely to come up in 2022 since it is one of the most stable parts of the HoA. The HoA saw the birth of new countries in the last 30 years. In 1993, Eritrea peacefully seceded from Ethiopia under the constitutional provisions of a confederation, which still exist. South Sudan seceded from Sudan in 2011. Both Eritrea and South Sudan are members of the African Union, IGAD and the UN. The Somaliland case is opposed by Somalia, which will also protest in the African Union and the UN.

If Somaliland succeeds, it may trigger similar situations around it. Could Tigray too seek secession? That would require its ability to protect its borders from Amhara and Eritrea, and open the route to Sudan, now occupied by Amhara militias. If no political solution is found, the TDF, having retreated into Tigray, could start consolidating itself. At present, secession seems neither the preferred nor the possible solution. Tigray can stay within Ethiopia if its security and welfare are guaranteed by the Constitution and current political dispensation.

The HoA is now integrated into the rivalries among Gulf countries. The role of the UAE, Qatar and Saudi Arabia was initially seen as joining the socio-cultural and infrastructure development of the region. Now, it has become part of the security establishment. The French, US and Japanese bases in Djibouti almost play no role in the current problems of the HoA. UAE, Qatar and Turkey sought influence in Somalia and its autonomous regions. In order to contend with Yemen, the UAE opened a relationship with Eritrea for the use of Assab port. Now in Ethiopia, the role of the UAE, Turkey and China, to support Addis Ababa in pushing back the TDF counter offensive has come to light.

The HoA, therefore, is becoming a playground for Gulf rivalries, much as happened in Libya. This would also bring in Egypt, which has a separate problem over the GERD with Ethiopia. The key to solutions in the HoA in 2022 thus remains a successful election in Kenya, a political resolution of issues in Ethiopia, restoration of civilian rule in Sudan and enhancement of the economic personality of Somaliland without disturbing the political-strategic status quo.

The writer is a former ambassador to Ethiopia. Views expressed are personal.