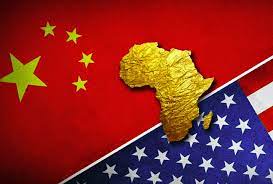 More than 20,000 Africans were killed in violent conflicts in 2020, an almost 10-fold increase from a decade ago. Concurrently, and perhaps not coincidentally, Sino-US rivalry has escalated sharply. A new cold war, this time between the US and China, along with other regional security threats, could be disastrous for Africa’s economic development and green transition.

The dramatic increase in high-intensity conflicts in Africa has coincided with two major trends: the expansion of transnational terrorist networks, sustained by a glut of itinerant foreign fighters, and the proliferation of foreign military bases amid rising Sino-US geopolitical tensions.

This global contest to project power has given rise to proxy conflicts raging across the region — including in Ethiopia, which hosts the headquarters of the African Union — as the US and China vie for control of natural resources and strategic trade routes.

As of 2019, 13 foreign countries were carrying out military operations on African soil — more than in any other region — and most have several bases across the continent.

Africa is home to at least 47 foreign outposts, with the US controlling the largest number, followed by France. China and Japan established their first overseas military bases since World War II in Djibouti, which is the only country in the world to host US and Chinese outposts.

A growing number of foreign countries are influencing the outcome of local conflicts, from Central Africa and the Sahel to the Horn and northern Africa. The US has invited many countries in the region to join an alliance aimed at curbing China’s overseas ambitions.

Unveiling a new US-Africa strategy in 2018, then-US national security adviser John Bolton warned that African leaders who failed to support the US diplomatically should not expect much US aid in the future. Bolton’s statement set the stage for a return to conditional development assistance, in which geopolitical considerations rather than investment returns largely determine rich countries’ allocation of resources to capital-poor economies.

In the 1950s, US President Dwight Eisenhower called proxy wars “the cheapest insurance in the world,” reflecting their limited political risks and human costs for sponsors. These conflicts are tremendously costly for the countries in which they occur.

In Africa, besides causing huge loss of life, proxy wars are prolonging insecurity and locking countries into a downward spiral of intergenerational poverty. They drain African countries’ already limited foreign-exchange reserves and shrink their equally narrow fiscal space while reversing democratic gains, reflected in the recent resurgence of military coups.

African governments’ rising military spending is absorbing a growing share of African government budgets, in contrast to a general decline in other parts of the world, further heightening the macroeconomic management challenges.

According to the Stockholm International Peace Research Institute, military spending in Africa exceeded US$43 billion in 2020, up from US$15 billion in the 1990s.

Defense outlays accounted for an average of 8.2 percent of government spending across Africa in 2020, compared with an unweighted global average of 6.5 percent. The share is considerably higher in conflict-affected countries such as Mali (18 percent) and Burkina Faso (12 percent).

That is where the fastest increases in defense outlays have occurred. The institute says that three of the five African countries where military spending is rising most sharply — Mali, up 339 percent over the past decade, Niger (288 percent) and Burkina Faso (238 percent) — are battling terrorist networks in the Sahel, a desperately poor region stretching across the continent from Senegal to Sudan and Eritrea.

Even before the COVID-19 crisis erupted, most poor African countries already faced huge, persistent infrastructure financing gaps — and the increase in military spending has often come at the expense of investment in productive, climate-resilient projects.

The shifts in government expenditure are undermining policymakers’ ability to use robust public investment to crowd in private capital and thus keep Africa on the long-run growth trajectory required to ensure global income convergence.

The scars of the Cold War — which claimed millions of African lives and was largely responsible for the lost decades that precipitated a widening income gap between Africa and the rest of the world — are still fresh, and the region cannot afford a sequel.

In addition to its enormous human and economic costs, the Cold War exacerbated political fragmentation in Africa as countries aligned themselves with either the West or the Soviet bloc.

The subordination of growth and development objectives to security priorities can only worsen intergenerational poverty, fuel migration pressures, damage the environment, and impede climate-change mitigation and adaptation.

The risks will increase further as policymakers are compelled to divert scarce resources away from the infrastructure investment needed to diversify African countries’ sources of growth and accelerate their integration into the global economy.

For centuries, colonial powers, and then superpowers, viewed Africa exclusively through the prism of their economic, security and geopolitical interests. This undermined long-term investment and regional integration, which sparked spectacular growth elsewhere the world.

The same mentality, fueled by US-China tensions, is perpetuating and exacerbating insecurity, ensnaring countries across Africa, especially in the Sahel, in a “conflict trap” and “poverty trap” that keeps them in a downward spiral.

As John Maynard Keynes said: “The difficulty lies not so much in developing new ideas as in escaping from old ones.”

Transcending a cold-war mindset will not be easy, especially in a changing geopolitical environment, in which technology diffusion reduces the direct costs borne by the sponsors of proxy wars. It is essential to foster Africa’s future prosperity, alleviate migration pressures, combat climate change and save innocent lives.

Hippolyte Fofack is chief economist and director of research at the African Export-Import Bank.

Horn of Africa has become a playground for Gulf rivalries