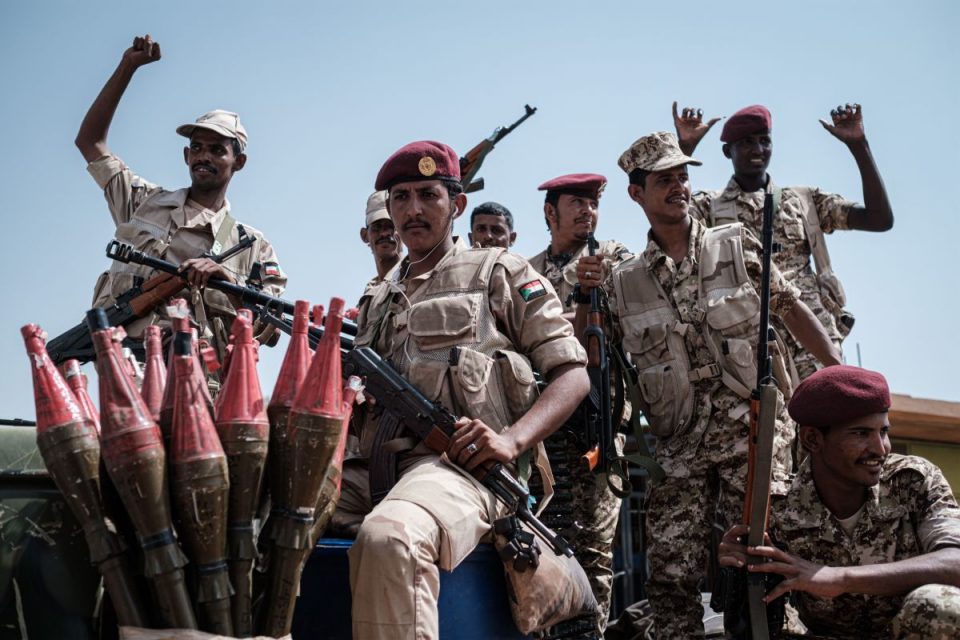 Standoff instigated by Sudan’s disbandment of security agency unit as members ordered to retire or join another force.

Heavy gunfire erupted in Sudan’s capital after agents of a feared security service rejected financial compensation offered after their unit was disbanded.

Shooting broke out on Tuesday outside the Directorate of General Intelligence Service office, formerly known as the National Intelligence and Security Service (NISS) – the powerful security arm of longtime leader Omar al-Bashir.

Masked members of NISS dressed in military uniform set up checkpoints in one of Khartoum’s main residential streets near the headquarters and were seen firing shots into the air, witnesses said.

In a televised statement, Information Minister Faisal Mohamed Saleh said the gunmen were former employees upset at the terms they had been offered upon their dismissal.

The authorities “continue their efforts to persuade the rebellious units to surrender and hand over their arms”, said Saleh, adding there were no casualties.

Authorities closed Sudan’s airspace for five hours as a precautionary measure after the start of the shooting.

The gunmen belong to a now-disbanded operations unit who were angry after being told to either retire or join the notorious Rapid Support Forces (RSF) paramilitary group.

“The events that occurred today are under control,” tweeted Prime Minister Abdallah Hamdok, a former World Bank economist. “We renew our confidence in the armed forces to contain the situation.”

NISS security agents were at the forefront of cracking down on protesters during the nationwide uprising that erupted against al-Bashir in December 2018.

The army deposed al-Bashir in April 2019 and the country’s new authorities pledged to reform NISS – a key demand of the uprising that called for his removal from power.

Lieutenant-General Mohamed Hamdan Dagalo, deputy head of the military council and head of the RSF, said former Sudan intelligence chief Salah Gosh was behind the shootings.

“This is a coordinated plan by Salah Gosh and another member of the National Congress party including some generals from intelligence service,” he told a news conference during a visit to Juba in South Sudan later on Tuesday.

“The person behind this shooting today is Salah Gosh. He has many generals active within the security sector with an aim to create confusion and fighting.”

Dagalo said while he would not consider Tuesday’s incident a coup attempt, any such action would not be tolerated.

Al Jazeera’s Hiba Morgan, reporting from Khartoum, said heavy gunfire and artillery could be heard late into the night.

She said members of the disbanded unit rejected the reforms, saying they did not want to join the Rapid Support Forces, and they had not been paid enough money to retire.

“They are saying that unless something is done by the government, they will continue with gunfire,” said Morgan. “We’ve been to several parts of Khartoum where there’s gunfire and seen people closing shops and have also seen people being robbed by members of the intelligence service.”

She also said the security situation was expected to get worse, adding the army had raised the alert level.

The Sudanese Professionals Association, the country’s main protest group, called on state agencies to intervene immediately to stop “these irresponsible operations that are causing terror amongst citizens”.

The security service said in a statement, which did not mention the gunfire, that negotiations were taking place to try to resolve the problem.

Authorities closed Khartoum’s airport because of the proximity to the site of unrest.

“Khartoum airport has been closed for five hours until 8pm local time (18:00 GMT) for security reasons,” Abdelhafiz Abdelrahim, the spokesman of the civil aviation authority, told the AFP news agency.