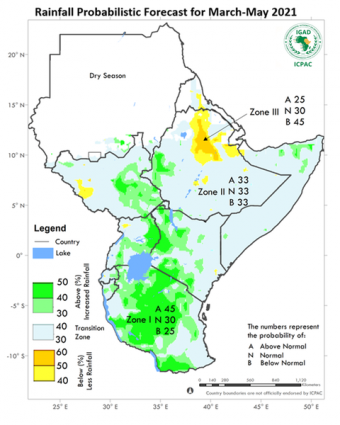 The Greater Horn of Africa Climate Outlook Forum (GHACOF) has issued its forecast for March, April, May, which is an important rainfall season for large parts of the region.

The season is expected to start 1-2 weeks early in northern Tanzania, northern Uganda, western and eastern Kenya, most of South Sudan, south-western Ethiopia, and southern Somalia. On the other hand, a late onset is expected over north-eastern Ethiopia, in line with the expected drier than usual conditions in this part of the region.

The season is also expected to be warmer than usual in north-eastern Somalia, Djibouti, Eritrea, Sudan, north-eastern and north-western South Sudan, Rwanda, and eastern and central Ethiopia. While the temperature is expected to be cooler than usual over most of Tanzania, Uganda, Burundi, and the cross-border region between Ethiopia and South Sudan.

The Greater Horn of Africa Climate Outlook Forum (GHACOF57) was convened online on 17 February by the IGAD Climate Prediction and Applications Centre (ICPAC) in collaboration with the National Meteorological and Hydrological Services in the region and other partners.

The virtual forum brought together climate services providers and users from key socio-economic sectors, governmental and non-governmental organizations, decision-makers, climate scientists, and civil society stakeholders, among others, to discuss impacts and mitigation measures for the upcoming season.

WMO supports regional climate outlook forums, which combine forecasting products from a variety of different models into a single consensus outlook. National meteorological services then downscale the regional outlook into national and local forecasts. GHACOF is one of the oldest and best established of the network.

La Niña – one of the climate drivers impacting the Greater Horn of Africa – has passed its peak as stated in the recent WMO El Niño/La Niña Update, but continues to influence temperatures and precipitation in different parts of the world, according to the latest WMO Global Seasonal Climate update, which also factors in all other major climate drivers such as the Indian Ocean Dipole. Seasonal outlooks are used to support planning by the United Nations and other partners in humanitarian and climate-sensitive sectors.

Considering the ongoing simultaneous emergencies impacting the region, including the Desert Locust invasion and the COVID19 pandemic, ICPAC encourages regional and national authorities to use its seasonal forecast to develop contingency plans.

In its most recent update, ICPAC warned of a very high risk of significant impact to both crops and rangelands in Ethiopia, Somalia, and Kenya due to the high numbers of desert locust swarms. The Food and Agriculture Organization is also issuing regular Locust Watch updates