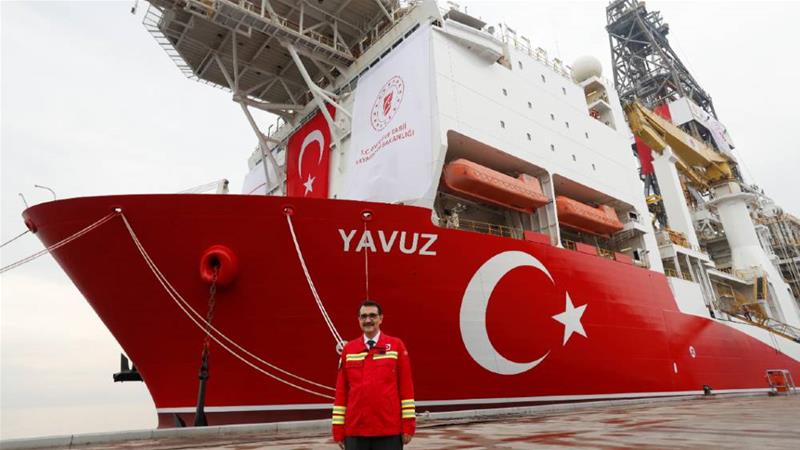 Turkey is threatening to send a drilling ship to waters claimed – and defended – by Greece.

The agreement, signed on November 27 and unveiled on Thursday, maps out a corridor of water stretching across the eastern Mediterranean between the coasts of Turkey and Libya, cutting across a swath that is also claimed by EU member Greece.

Turkish energy minister Fatih Donmez has announced that, once the agreement is ratified by both sides, Turkish drillships will begin to search there for oil and gas.

Although the Hellenic Navy neither confirms nor denies it, two experts tell Al Jazeera that Greece has dispatched naval forces to the disputed area southeast of Crete.

“If a Turkish drillship does show up, our ships would take action against it, and that could lead to an armed confrontation, because these ships are accompanied by naval vessels. And of course that could ultimately lead to war,” says a veteran senior diplomat on condition of anonymity.

“There will be no Turkish drillship. It has been communicated to Turkey that we shall not tolerate any exploration in the area Greece considers to be its EEZ,” says Syrigos, who also serves as an MP for the ruling conservative New Democracy party.

Greece to go it alone

“We are preparing for all eventualities on all levels,” Greek defence minister Nikos Panayotopoulos told Skai News on Thursday, without elaborating. The navy’s chief of staff, Admiral Nikos Tsounis, added: “We shall not wait for anyone to come and help us. Whatever we do, we shall do alone.”

A meeting between Greek Prime Minister Kyriakos Mitsotakis and Turkish President Recep Tayyip Erdogan on the sidelines of a NATO summit on Wednesday produced no breakthrough.

“It was an open and honest discussion that did not reach agreement on any subject raised,” government sources told Al Jazeera, saying the topics included increased refugee flows from Turkey to Europe via Greece.

“There was agreement to continue confidence-building measures, and for both sides not to inflame the climate, but to keep the dialogue open,” the source said.

Greece and Turkey have followed a series of confidence-building measures since 1987, when they nearly came to war over hydrocarbon exploration in the Aegean. These include avoiding military exercises during the summer tourist season, establishing a direct line between the chairmen of the joint chiefs and defence ministers, and inviting officers from the other side to attend wargames. Not all measures have been observed. For a period during 2017-18, for example, the direct telephone line between the military chiefs was reportedly defunct.

“I did not leave the meeting with the impression that I was talking to people who simply showed up to speak their piece and leave without there being some room for agreement,” said Panayotopoulos. “I believe there is room for agreement, as long as people are well disposed. We showed a good disposition, but I did not see the same on the Turkish side.”

In a related development on Thursday, Cypriot President Nikos Anastasiadis said his country would petition the international court at the Hague to defend it from Turkish explorations in the Cypriot EEZ.

Since last year, four Turkish exploration vessels have been looking for oil and gas in waters delimited by Cyprus as its EEZ in a series of international treaties with neighbours.

The EU and US have called Turkey’s exploration in the Cyprus-declared EEZ illegal, and called on Ankara to stop. Syrigos believes the Turkish-Libyan agreement will be submitted to the UN as a way of addressing that issue.

“Turkey had absolutely no legal basis for its [hydrocarbon] explorations in the eastern Mediterranean,” Syrigos says. “Now it acquires a legal basis, albeit an illegal one.”

The European Union stands in full solidarity with Greece and Cyprus regarding recent actions by Turkey in the Eastern Mediterranean, including the Aegean Sea

He believes the move is also designed to pre-empt the Greek and Cypriot EEZs from surrounding it. “It creates a wall that cuts Greece off from extending itself into the eastern Mediterranean,” he says.

Unlike Cyprus, however, Greece has not delimited its EEZ. “We haven’t submitted coordinates to show where our interests end in the eastern Mediterranean,” says a Greek international relations expert on condition of anonymity. “How much [maritime space] are the Turks taking from us? We haven’t submitted that,” he says.

“The European Union stands in full solidarity with Greece and Cyprus regarding recent actions by Turkey in the Eastern Mediterranean, including the Aegean Sea,” the European External Action Service (EEAS) said in a statement on Wednesday. “Turkey needs to respect the sovereignty and the sovereign rights of all EU member states,” it said.

Israel, which has formed an energy alliance with Cyprus, Greece and Egypt, and some of whose gas fields are being developed by a Greek company, also issued a statement on social media. “Israel reiterates its full support and solidarity with Greece in its maritime zones and its opposition to any attempt to violate these rights. Israel attaches great importance to its partnership with Greece,” the statement read.