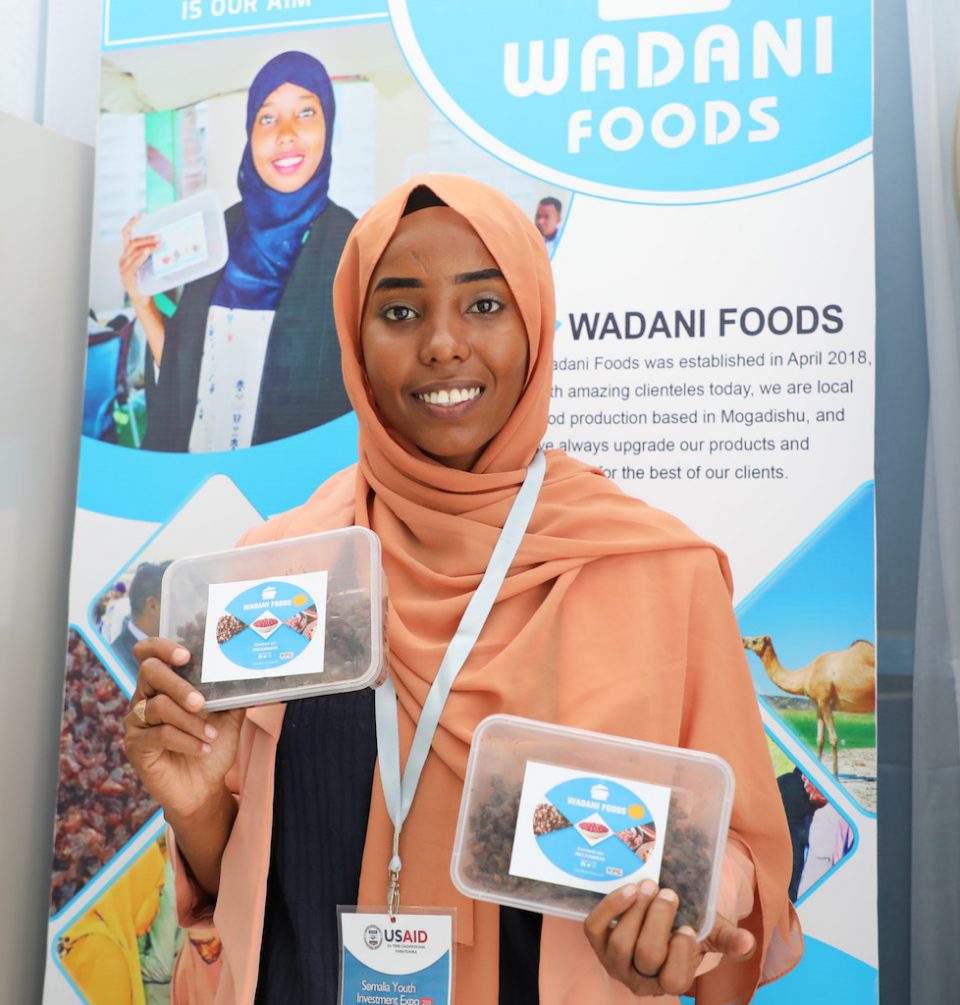 Through GEEL, USAID accelerates Somalia’s growing integration into the global economy through a combination of initiatives that improve the country’s competitiveness; spur new investments; and increase market linkages and business partnerships.  This program aims to boost Somali exports of quality agriculture and fish, increase dairy production, reduce reliance on imports, and increase jobs in regions recovering from years of conflict and recurrent natural disasters.

Saamaynta Ganacsiga means “impact in trade” in the Somali language and reflects the Growth, Enterprise, Employment, and Livelihoods (GEEL) project’s goal of keeping partners informed and engaged. In this special edition, we take a look at  recent youth oriented activities namely, Modernizing the electric utility system to support industry, commerce, and agriculture in Somalia, Youth Investment Expo in Mogadishu, The Promise of Somalia’s Youth and  GEEL’s Focus on Youth also featured is a video on Somali Youth in Business

Modernizing the electric utility system to support industry, commerce, and agriculture in Somalia

When Hargeisa, the capital of Somaliland, was destroyed by war in the late 1980s, the electricity infrastructure was reduced to rubble as well. Business owners who needed to power restaurants, cafés, and factories installed on-site diesel generators and then extended distribution lines to their neighbors. In time, these self-starters formed Somaliland’s electric utilities, which now serve the region’s major urban areas. Although this electric utility industry is a story of self-sufficiency, grit, and success, the sector suffers from unreliable electricity, some of the highest energy prices in the world, extremely lax safety standards, and high barriers to entry for women who want to work in energy.

Recognizing the difficulty of achieving economic growth without reliable electricity, USAID launched an energy activity through the Somalia Growth, Enterprise, Employment, and Livelihoods (GEEL) program in the fall of 2016. GEEL aims to support Somalia’s reintegration into the global economy by working through several sectors. The energy component of the program supports the entire energy value chain, including policy, safety, regulations, the private sector, consumers, and the industry’s trade association. To that end, the project works with the Ministry of Energy and Minerals, the Somaliland Energy Association, electric utilities and solar companies, businesses, farms, and female engineering students. Continue Reading Modernizing the electric utility system to support industry, commerce, and agriculture in Somaliland

A Youth Investment Expo in Mogadishu  provided a platform for youth business leaders from across Somalia to engage with the U.S. Government, the Federal Government of Somalia, financial institutions, the private sector, policymakers, and NGOs, on January 27 and 28, 2020. The Expo served as a unique space for young people to share their vision for and contributions to the growth and future of Somalia.

The two-day event gathered over 400 youth and featured plenary sessions and interactive thematic discussions. It provided an opportunity for a productive exchange of ideas to address issues facing young people like access to finance and investment, entrepreneurship, and education. The Expo was also a platform for youth-owned businesses to showcase their products, ranging from processed meat and dairy, to innovative fish vending, energy, and agricultural solutions, at the Expo’s marketplace.

The Expo was the perfect place to announce the new youth program that aims to generate economic opportunities for young people across Somalia and support young entrepreneurs and innovators to invest in their future and the future of Somalia. It also yielded significant gains for youth businesses in attendance as USAID through GEEL, and six banks; Microdahab, Salaam, IBS, KIMs, Premier, and Amal, committed over $1.6 million in start-up grants to 95 youth working in productive sectors of the economy. Click the links below to learn more about the Somali youth in business, and the new project focused on supporting their ambitions.

The Promise of Somalia’s Youth

When most people think of Somalia, they immediately think about conflict. Or they think about insecurity. Or maybe hungry people.

But when I talk to the young people I work with throughout Somalia, that’s not what they see. They see hope – and potential.

To be sure, this East African nation continues to face many challenges. As it recovers from a decades-long civil war, Somalia is building its nascent governance structure while conflict continues in certain areas. The vacuum created by an absent or weak government over many years has resulted in poor infrastructure and fragile social systems—be they educational, health-related, or economic. Today, approximately 70 percent of Somalis live below the poverty line.

These challenges have hit Somalia’s youth particularly hard. More than 60 percent of the population is under the age of 25, and this group is consistently confronted with roadblocks to their economic success. Educational attainment is low—just 40 percent of children in Somalia attend primary school. The literacy rate for the total population stands at 37.8 percent. Vocational training systems are also weak. As a result, there are few young people who have the education and skills demanded by the current labor market; Somalia’s youth experience one of the highest unemployment rates in the world at 60 percent. When education and income-generating opportunities are unattainable, youth can turn to negative coping mechanisms such as illegal migration, engaging in organized crime, and even joining violent extremist groups. Continue reading The Promise of Somalia’s Youth