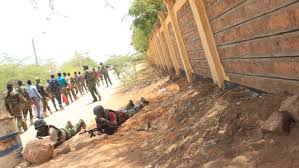 A day after 11 parliamentarians secretly travelled to Somalia and met President Mohamed Abdullahi Farmaajo, a fight broke out between two military camps, with the effects spilling over to Mandera County.

Activities were interrupted by a heavy explosion that was followed by gunfire at about 11am Monday, signalling an expected clash between Jubbaland forces and the Federal Government of Somalia (FGS).

Communication was cut off at about 10am and explosions and gunshots rent the air for the better part of the day.

FGS troops have been camping at Bula Hawa, a town neighbouring Mandera, for the past month, planning a raid to capture a fugitive Jubbaland minister, who has been hiding in the county.

Mr Abdirashid Hassan Abdinur, alias Abdirashid Janan, arrived in Mandera town on January 30 and was booked into a local hotel.

He escaped on January 28 from a Mogadishu prison where he had been held since August 31, 2019.

He left the hotel on February 10 and rented a house at Border Point 1 in Mandera town.

Since the minister arrived, the high tension in Mandera town has forced some residents to flee from their homes, fearing deadly clashes between the FGS and the Jubbaland troops, who are supported by the Kenya Defence Forces (KDF).

For the better part of Monday, Jubbaland forces guarding the fugitive engaged in an exchange of fire with the FGS forces along the Kenya-Somalia border within Mandera town.

Overpowered Jubbaland forces were received and hosted in Mandera town police station with the KDF guarding the facility.

It remained unclear whether the wanted minister remained in the rented house or was moved to a military camp.

Mandera County Police Commander Jeremiah Kosiom was taken to the camp under a heavy police escort.

Mandera border police post was deserted immediately after the fight broke out.

The clash brought business to a standstill in Mandera town, with most shops closed.

“I had to close my shop as it was just a matter of time before the fighting got into town,” said Adan Yarrow.

Resident Ali Hassan said: “We all knew this was going to happen but our government chose not to take action by arresting and handing over this minister,” said a resident of Mandera.

Most schools in the town were closed and learners asked to go home.

A spot check by the Nation revealed that most of the fighting took place on the Somalia side of the border with the KDF on standby to respond to any spillover.

Hospitals remained operational but none had received casualties by noon.

“We are on duty and are yet to receive any victim of the fighting at Border Point 1,” said a medical officer at Mandera County Referral Hospital.

On January 15, the facility’s medical superintendent issued a notice asking staff to be on standby.