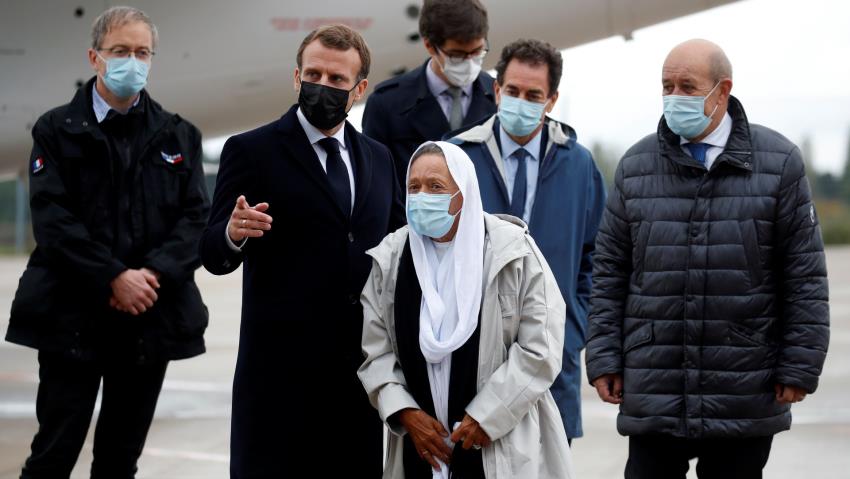 Seventy-five-year-old Sophie Petronin says she ‘transformed detention… into a spiritual retreat’ while captive in Mali.
A French aid worker held in Mali for four years by militants has revealed that she converted to Islam during here captivity, according to French media reports.

Sophie Petronin arrived back in France on Friday, where she was greeted at Villacoublay airport by President Emmanuel Macron.

“My greatest joy today is knowing that my assistant was able to continue working without me,” Petronin was quoted by Le Point as saying.

“For Mali, I will pray, implore Allah’s blessings and mercy, because I am a Muslim,” she added. “You say Sophie, but you have Mariam in front of you.”

Petronin, 75, was abducted while working Mali’s northern Gao region in December 2016. Seven months later, she was shown in a video posted by the Al-Qaeda in the Islamic Maghreb (AQIM) militant group.

She had been running the charity Association Aid in Gao since 2004.

“I hung on – I prayed a lot because I had a lot of time,” Petronin told reporters at the French embassy in Bamako prior to her return. “I transformed detention … into a spiritual retreat, if one can say that.”

Petronin was released on Thursday alongside Malian opposition leader Soumaila Cisse and two Italian nationals, Father Pierluigi Maccalli and Nicola Chiacchio, who were freed as part of an exchange with the militants.

Despite her experience as a hostage, Petronin says she wishes to return to Mali to continue her charity work helping children in the West African country.

“I made a commitment to the children. For four years I haven’t seen how the programmes are working,” Petronin said of her work with orphaned and malnourished children. “I will go to France, to Switzerland, and then I will come back to see what’s happening here [Mali].”