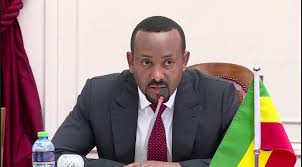 Ethiopia’s Prime Minister Abiy Ahmed announced on Wednesday that his country will be starting the filling of the Grand Ethiopian Renaissance Dam (GERD) this coming rainy season as the construction of the dam is progressing well, according to Ethiopia’s state news agency ENA.

Ethiopian officials had earlier said the process will take place during the July and August wet season.
Abiy made the remarks on the ninth anniversary of the start of construction on the GERD, which commenced in 2011.
The Ethiopian prime minister added that “Ethiopia faces two challenges, namely the outbreak of coronavirus and the completion of the dam.”
“The dam is a valuable resource the public treasures most,” he said, noting that the government, in collaboration with the public, will complete the dam and fight the virus relentlessly.
“The reason why we put huge emphasis on this dam is because it is a symbol of our sovereignty and unity,” he stressed.
Tensions have been building between Egypt and Ethiopia over some technical details regarding the operation and filling of the dam.
Ethiopia hopes that the massive $4.8 billion project on the Blue Nile will allow it to become Africa’s largest power exporter.
Egypt, which is downstream from the dam, fears that the project will diminish its share of Nile water, on which it is almost entirely reliant for its fresh water.
The US stepped in to host negotiations in November after the three countries announced that talks had reached a dead-end, and after Egypt asked for an international mediator.
However, the three countries were expected to sign a final deal on the GERD in late February, when the last meeting was scheduled to be held, but Ethiopia skipped the meetings, citing incomplete domestic discussions.
Egypt signed the deal and called on Ethiopia and Sudan to do the same.
Egypt has accused Ethiopia of “deliberately” impeding the course of negotiations, and the US Department of Treasury Secretary Steven Mnuchin said following the 28 February meeting that “the final testing and filling should not take place without an agreement.”