Famine “is at the door” in Somalia, with “concrete indications” that parts of the south-central Bay region will be in famine between October and December this year without an urgent surge in aid, the UN warned today.

“This is the final warning to all of us,” the UN’s humanitarian chief, Martin Griffiths, told a press conference in the Somali capital, Mogadishu. “This is the last minute of the eleventh hour to save lives.”

A two-year drought, mass displacement, decades of war, and a so-far sluggish aid response means more than seven million people – almost half the population – are already chronically hungry. In May, at least 213,000 people in the Bay region were in “catastrophe” – a technical term for starving.

But despite growing evidence for months of the looming crisis, aid has been slow to arrive. In April, the UN’s $1.5 billion response plan was just 17 percent funded, only reaching 70 percent in August. As a result, there have been repeated fears of “pipeline breaks” in relief delivery.

“Much of that donor money has come in the last month, but what can you do in just one month to meet needs?” said a UN official, who asked for anonymity so they could speak freely. “Why didn’t they frontload the aid and act earlier?”

Four seasons of back-to-back drought has driven more than a million people from their rural homes. Mostly women and children, they have camped in packed settlements of bivouacs, made from scrounged bits of old cloth on the outskirts of towns – more reliant on the generosity of the local community than aid agencies.

Crop failure and the decimation of livestock herds have been compounded by rocketing food prices. In June, the cost for a household to meet its basic food needs was between 56 and 110 percent higher than the five-year average in some of the hardest-hit regions, according to the World Food Programme.

Even if the rate of aid deliveries does pick up, a La Niña-induced failure of the October rains is forecast, which will trigger an unprecedented fifth drought season and a “humanitarian catastrophe” that will likely last through to March 2023, said Griffiths.

The following briefing explores both the technicalities of famine, and the political failure that underpins it.

Famine is a highly technical classification that meets three specific criteria: At least 20 percent of households in a given area face an extreme lack of food; more than 30 percent of children under five in the sample group are acutely malnourished; and at least two people out of every 10,000 are dying daily from hunger-related causes (in a non-crisis sub-Saharan African country, the rate is around 0.3).

The analysis is led by the Integrated Food Security Phase Classification (IPC) system, made up of UN agencies, international non-profits, and governments. The IPC’s hunger gauge – from Phase 1 “minimal” to Phase 5 “famine” – has become the globally accepted barometer of food insecurity.

A famine declaration is a last call for action when all the early warning designed to prevent famine has gone unheeded. As such, it marks the “failure of the humanitarian system”, José Lopez, IPC’s global programme manager, told The New Humanitarian.

Only two famines have been declared since the IPC system was launched in 2004: Somalia in 2011; and South Sudan in 2017, when conflict-related starvation threatened 80,000 people in parts of Unity State.

As famine occurs in areas where almost by definition data is hard to gather, there’s a little wiggle room in the classification system, even within Phase 5:

It’s important to note that the IPC system measures intensity rather than magnitude: The focus is on the proportion of people starving in a given area rather than the absolute number experiencing famine. It’s also only a snapshot of what has already happened. When famine is declared, it’s in a sense too late – deaths are already occurring.

Famine analysis is handled by the country-level Technical Working Group (TWG) of the IPC, which operates in 35 food insecure countries and is typically government-led. An almost identical system, the Cadre Harmonisé, covers West Africa.

The TWG normally brings 50 to 100 analysts together to examine the evidence, drawing on the existing data from humanitarian agencies, and groups like the US-funded Famine Early Warning Systems Network (FEWS NET). The number crunching usually takes a couple of weeks. In the case of Somalia, three teams were spread between Mogadishu, Hargeisa in Somaliland, and north-central Galkayo. The teams were then brought together to consolidate the data in a final week-long meeting in Nairobi. 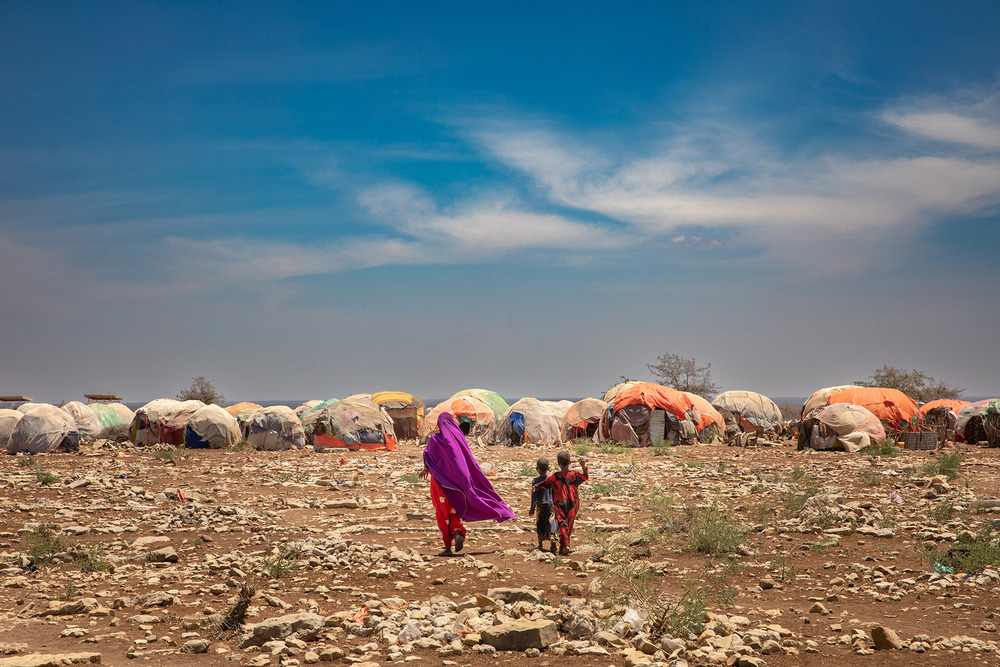 Mercy Corps/TNH
Thousands of Somalis escaping drought and conflict have been arriving every month in sprawling settlements on the outskirts of towns, like this one in Baidoa, south-central Somalia, pictured in August 2022.

When famine is suspected – or more controversially, no consensus is reached on the evidence – a Famine Review Committee (FRC) is triggered. Made up of around five independent experts, the committee validates the TWG’s findings.

Its conclusions can differ. That was the case in South Sudan’s eastern county of Pibor in 2020. Government-aligned members of the TWG had downplayed the severity of the crisis, rating it “Catastrophe”, while the FRC determined “famine was likely”. There was “clear political interference”, said a senior aid official, who asked not to be named. “Part of the TWG was trying to suppress the possibility of Phase 5 [Famine].”

Does a declaration matter?

It “triggers a lot of action”, said Lopez. In 2011, there was a doubling of funding for Somalia within days of the declaration.

But a focus on famine tends to imply the IPC’s other phases of food insecurity are somehow tolerable. And while famine typically affects relatively few people, millions can be in “emergency” situations with hunger-related deaths – or “excess mortality” in IPC’s dispassionate definition.

“The problem is that decision-makers want to know whether there is famine or not before they act to the extent that is required,” said Lopez. “But people can be in Phase 4 for a long time, with excess mortality. It’s already a disaster and requires a strong response.”

The hard lesson from Somalia’s famine in 2011 – and the successful management of an extreme drought six years later – is that relief needs to be anticipatory rather than reactive. Apart from saving lives, it’s also financially prudent (however distasteful that may sound). Every $1 spent on disaster prevention saves more than $2 in future emergency costs.

The politics of famine

The evidence bar for famine is deliberately high, designed to rule out the chance of false alarms and give donors confidence in the verdict. The flip-side is that there are “relatively few protections” against missing the signals and failing to declare a famine when one is underway, researchers Daniel Maxwell and Peter Hailey point out.

It’s a particular problem in conflicts in which governments are involved, and where starvation is used as a weapon of war. In the long-running violence in Syria and Yemen, where city sieges have been a hallmark, it has been difficult to collect the detailed evidence needed to make a famine determination – even though general levels of hunger have been incredibly high.

“A famine declaration is a political act masquerading as a technical diagnosis.”

That could also be occurring in Ethiopia, where a government aid blockade of the northern region of Tigray – and now renewed fighting – threatens almost six million lives.

“The word ‘famine’ is highly charged,” analyst Alex de Waal, who has written extensively on the politics of famine, told The New Humanitarian. “That is why the Ethiopian government is so anxious to prevent humanitarian data-gathering in Tigray, and the Saudi-led coalition has been doing the same in Yemen.”

Given the limitations around data that can prejudice the evidence, a famine declaration “is a political act masquerading as a technical diagnosis”, said de Waal.

Somalia’s food crisis is also complicated by conflict. An estimated 900,000 people live in areas controlled by the jihadist group al-Shabab that have been battling successive weak central governments for more than two decades.

They are hostile to Western aid agencies, preferring to trumpet their own, limited relief efforts, or to grant access to small, local NGOs they trust – which they then “tax”. US counter-terror legislation also inhibits direct humanitarian engagement by US-funded agencies.

Griffiths on Monday called for the humanitarian community to be given “immediate and safe access to all those in need”, but told The New Humanitarian no talks were underway with al-Shabab to negotiate safe passage.

“Al-Shabab wants to monopolise legitimacy,” Mohammed Ibrahim Shire, a Horn of Africa analyst, told The New Humanitarian. “As such, everything has to go through them and be managed by them so that they can sustain this image of a ‘state actor in waiting’.”

That poses a dilemma for drought victims living in al-Shabab-controlled zones.

“They either have to flee to government-controlled areas and receive support there, or stay put and wait for al-Shabab’s humanitarian wing to deliver aid,” said Shire. “Whatever action they take, help is not always guaranteed.”

Writing Piracy in Somalia: Who Controls the Narrative and How?