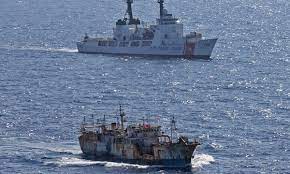 Once the most pirate-infested region on the planet, the waters off the coast of Somalia are now home to a different maritime crime – illegal, unreported and unregulated (IUU) fishing, according to a new report by the Global Initiative Against Transnational Organized Crime.

The presence of IUU fishing was also one of the factors that once spurred piracy off the Horn of Africa. (Source: Wikimedia Commons)“The waters off Somalia are some of the richest fishing grounds in the world and are still largely untapped,” the report said. “Following the steady decline in attacks by Somali pirates since 2012, foreign fishing fleets have gradually returned to Somali waters”

Most commonly, the fleets hail from Iran, Yemen and as far as Southeast Asia. However they do not work alone, and are often only able to function thanks to support from Somalia’s notoriously corrupt state institutions, the organization said.

“IUU fishing in Somalia is in effect a public-private partnership in transnational crime,” Global Initiative explained. “Private fishing operators vie for capture of state bodies in order to lend legitimacy to their IUU fishing operations.”

Four decades of civil war has left the East African nation’s institutions weak and disorganized. Having the support of one office is no guarantee that it will be respected by another.

“Decisions and authorizations issued by one state body are often countermanded by other agents of the state who are under the influence of a different set of private interests,” the report said.

The presence of IUU fishing was also one of the factors that once spurred piracy off the Horn of Africa.

“Domestically, the prevalence of foreign IUU fishing vessels has been frequently cited as a justification for acts of piracy by Somalia-based gangs,” the report said. “Somali pirates have instrumentalized this perception, casting themselves as defenders of Somali waters against foreign exploiters.”

Encouraging piracy, either by the fishermen themselves or to combat them, is far from the only ill-effect IUU can have on a society, according to a report by Interpol in December. It also spawns a large network of organized criminal activity..

Somalia is no exception.

“Rampant corruption within Somali state institutions continues to foster a dynamic whereby foreign fishing actors will have little incentive to purchase legitimate fishing licences from the state when their competitors are able to secure the same rights through extra-legal channels,” the report said.

“So long as this dynamic persists, it will contribute to the environmental destruction of Somalia’s marine resources and undermine the long-term ability of the state to generate legitimate revenue from fisheries,“ it concluded

Adapted from its original source- OCCRP