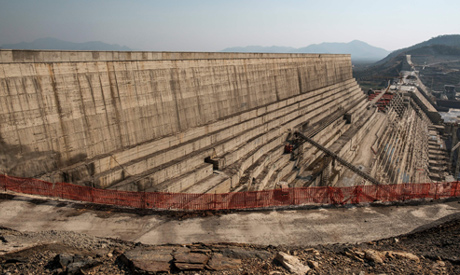 A general view of the Grand Ethiopian Renaissance Dam (GERD), near Guba in Ethiopia, on December 26, 2019. (AFP)
AP , Monday 9 Mar 2020
An Ethiopian Cabinet minister says that U.S. President Donald Trump was provided with “inaccurate and inadequate” information about the dam the country is building on the Nile River.The remarks came amid a public disagreement with Egypt after Ethiopia did not attend the latest round of talks over the dam on Feb. 26 in Washington, D.C.

Following the breakdown in the talks, which are being mediated by the U.S. and the World Bank, Trump phoned Egyptian President Abdel Fattah al-Sisi and “expressed hope that an agreement on the Grand Ethiopian Renaissance Dam would be finalized soon,” according to a statement issued by the White House. This prompted speculation that Trump is favoring Egypt in the dispute.

Trump “was given inadequate and inaccurate information on some issues regarding our dam,” Sileshi Bekele, Ethiopia’s water and energy minister, said on a popular Ethiopian late night show.

“For example, there was an understanding that Ethiopia’s dam will block all the water flowing to other countries. President Trump said this could lead to a war,“ said Sileshi. “But we have told him the facts and presented the opportunities the dam will bring not only for Ethiopia but to other countries in the region.”

The construction of the $4.6 billion Grand Ethiopian Renaissance Dam on the Blue Nile, which is about 71% complete and promises to provide much-needed electricity to Ethiopia’s more than 100 million people, has been controversial for years.

Ethiopia says the dam is needed to help pull many of its people out of poverty, while Egypt warns that if the dam is filled too rapidly in the coming years, then it will not get its fair share of river’s water during the filling process.

Ethiopia has said it plans to start filling the dam in July this year, at the start of the rainy season, and that it would take up to seven years to fill the dam. Egypt has suggested that the dam should be filled more slowly over a period of 12 to 21 years.

The U.S. and the World Bank are mediating the negotiations between Egypt, Ethiopia and Sudan, the countries through which the Nile River flows. Ethiopia did not attend the latest meeting on Feb. 26 in the U.S. capital, citing ongoing consultations within the country.

After the meeting, the U.S. Department of Treasury Secretary Steven Mnuchin on February 28 stated that “the final testing and filling should not take place without an agreement.”

Egypt’s foreign ministry said on February 29 it “regrets Ethiopia’s unjustifiable absence . at this critical stage in the negotiations” and added that “Egypt will use all available means to defend the interests of its people.”

Concern is growing in Ethiopia over the disagreement over the dam.

Ethiopia’s distance running legend, Haile Gebrselasse, weighed in the issue by saying both Ethiopia and Egypt should solve their differences over a negotiating table.

“This is a country that doesn’t have electricity for more than 85% of its population,” Haile told The Associated Press on Monday. “I will be the first to object against the Ethiopian side if they block water flows to Sudan and Egypt. But I don’t think that’s the purpose of the Nile dam. The controversies should be resolve according to international law over a negotiating table.”