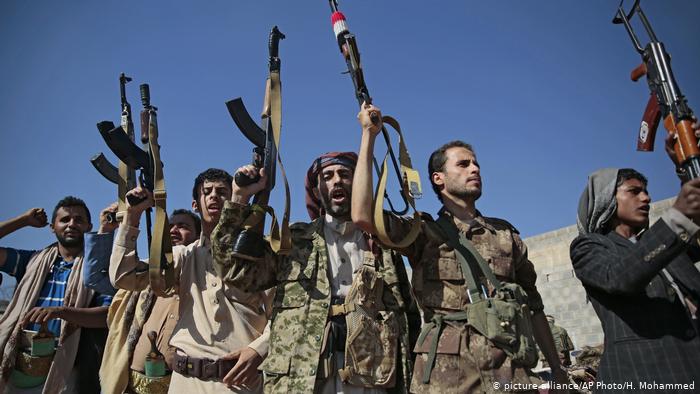 Houthi troops ride on the back of a police patrol truck after participating in a Houthi gathering in Sanaa, Yemen (photo credit: KHALED ABDULLAH/ REUTERS)

An intelligence official for the Houthi rebel group in Yemen claimed on Sunday that they have a “bank of vital and important targets” in Israel, Saudi Arabia, and the United Arab Emirates.

Abdullah Yahya al-Hakim, the head of the Houthis’ Intelligence and Reconnaissance Authority, told the September 26 newspaper that the authority has managed to “thwart the psychological warfare directed” at Yemen, while also fighting the Saudi-led military coalition’s intelligence.
The intelligence head claimed that the Houthis have managed to conduct intelligence operations deep within Saudi and UAE territory and into their operations rooms, electronic warfare centers and encrypted communications systems.

The Iranian Tasnim News Agency stated that the Houthis have missiles that may be able to reach as far as Eilat and could also target Israeli ships in the southern Red Sea. The news agency claimed that the Houthis have “nothing to lose by targeting Zionist positions.”
Tasnim added that a missile or drone strike on the UAE or Israel by the Houthis in the coming weeks is “not unexpected and is perhaps the most dangerous surprise of the Yemeni war.”
The Houthi rebels have made similar threats against Israel in the past.
In December, General Mohammed Nasser al-Atifi, a senior commander of Houthi forces, told the Arab media outlet Al-Medean that they have “a bank of targets, both land and sea-based, at which it can strike the Zionist enemy.”
The senior Houthi commander added that “[they] will not hesitate to attack them if the leadership decides to do so. Our military forces are prepared for this kind of attack.”
In November,  Houthi military spokesman Yahya Saree said that Yemen will “provide an appropriate response to the regime in Tel Aviv if the Israeli army acts aggressively. Israel has regional objectives in the area, but we will not hesitate to response to Israeli evil.”
Source: The Jerusalem Post
previous post