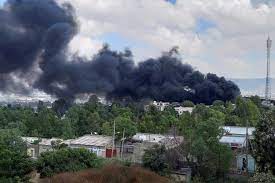 Ethiopia said Thursday that its air force destroyed a military training center in rebel-held Mekele — the capital of the troubled Tigray regional state.

The target is where the Tigray Peoples Liberation Front (TPLF) has been training and organizing fighters for months, it said.

Getachew Reda, a senior TPLF official, accused the government of targeting civilians in its bid to gain control of territory taken by the rebels.

TPLF accused the government of attacking areas near Lachi in Mekelle 00 the Tigray capital which is a neighborhood where civilians reside.

Residents took to social media where they posted videos and pictures of the attack and said injures had been recorded.

“We are having a humanitarian crisis here. People are suffering and living in fear of bombs that might rain from the sky at any time,” a teacher from Mekelle told Anadolu Agency.

“Initial information from the ground indicates that civilians, including women and children, were injured, we are trying to gather more information. More than 5.2 mln people in Tigray need life-saving assistance,” he said,

TPLF said Monday that air attacks by the Ethiopian air force targeted a market and three civilians were killed, Ethiopia has rejected those claims.​​​​​​​